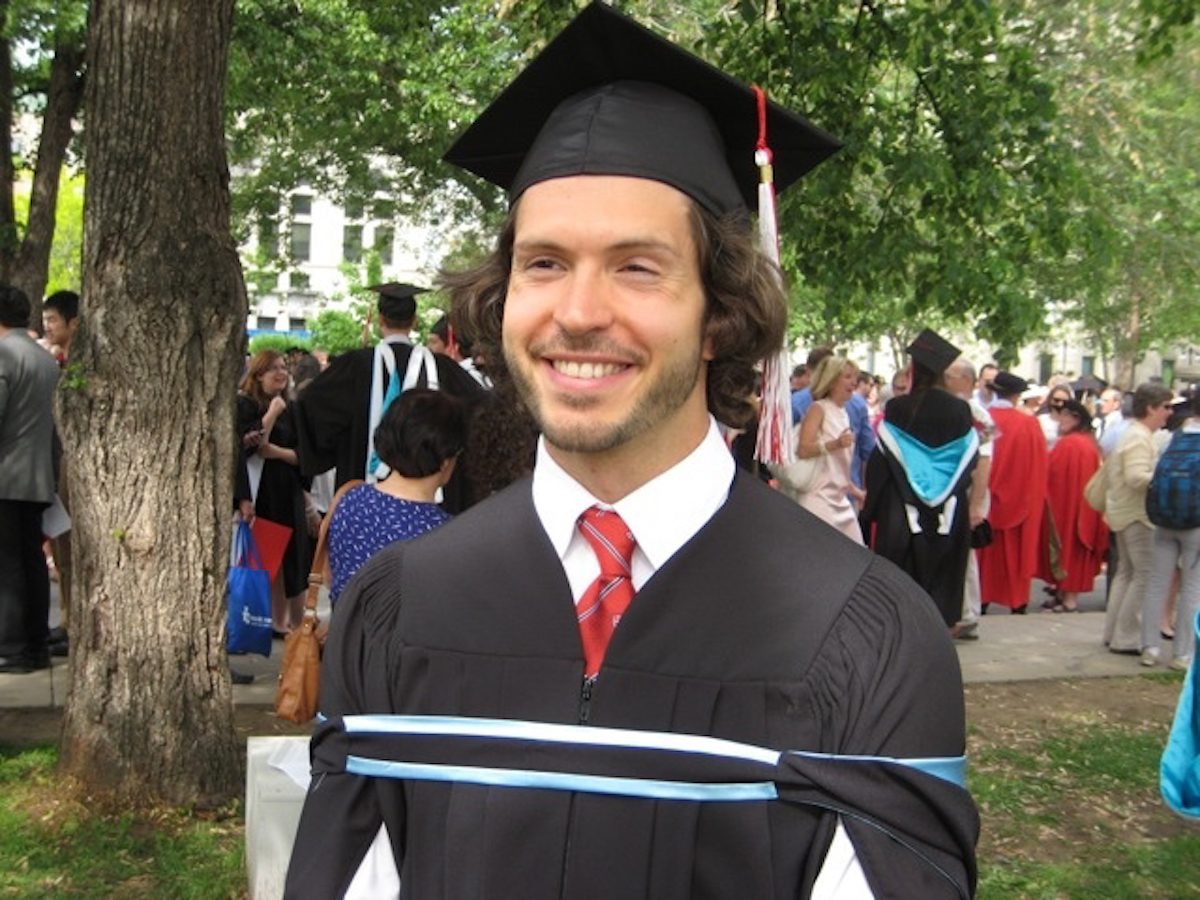 Enrico Quilico after earning his master's degree from McGill University in 2015. (Courtesy of Enrico Quilico)
People

Overcoming a Motorcycle Crash to Become an Ironman

Motorcycle accidents are almost always traumatic and are often fatal, which is why it’s so important to share the road. One man barely survived a crash, but his hard work and will to push himself have put him miles ahead.

Enrico Quilico of Montreal, Canada was only 23 when he took his father’s motorcycle out for a ride on May 21, 2006. While he was on his way back, the driver of a car thought he had enough time to take a turn in front of Quilico.

The driver was supposed to yield and misjudged his timing, and Quilico had to break rapidly in order to try and avoid the car, falling from his bike.

He then proceeded to skid 60 feet headfirst into the car. He lost consciousness right away, and was rushed to the hospital where he remained in a coma for two weeks.

At one point his body began to shut down.

“Toward the end I just wouldn’t wake up from the coma. My family was advised that I was most likely just living with life support,” Quilico told The Epoch Times.

He would then spend five weeks in the intensive care unit.

Quilico had suffered a traumatic brain injury, a shattered left humorous and pelvis, and a collapsed lung as a result of the accident.

Doctors had to reconstruct his humorous with two titanium plates and about a dozen screws.

However, the most serious surgery he underwent was a craniotomy. As a result of the trauma to his head, his brain had swelled creating an immense amount of pressure inside his skull.

While he was in the coma, Doctors removed a piece of his skull to relieve the pressure on his brain. They kept the piece of skull in a freezer, and about five months later they put the same piece back in his skull.

It wasn’t until after the craniotomy that Quilico had finally fully regained consciousness. However, he had terrifying memories of having been strapped to his bed to prevent a fall and hitting his head again.

“I remember waking up from that surgery, and it was one of the most painful experiences of my life,” Quilico recalled.

He had been in the hospital for a total of two months, and worked with an occupational therapist, a physiotherapist, a neuropsychologist, a psychiatrist, and a speech and language pathologist.

Quilico had to relearn how to get dressed, balance and walk, brush his teethe, bathe himself, and had to regain mobility in his arm and pelvis. Furthermore, he had to work on his short and long term memory, and had to learn how to speak again.

“When your brain gets rattled that bad all the neuro-connections are reestablishing themselves, and I just wasn’t with it. I was not lucid. I was not coherent,” Quilico said.

A year after the accident, Quilico fell into a deep depression as result of his condition because he was still severely impaired.

However, after the second year he began recovering more rapidly. Nevertheless, his rehabilitation had not been easy.

Despite his accident and injuries, Quilico was able to go on a backpacking trip in eastern Europe in 2008 by himself for six weeks.

“I was celebrating this life that I had reclaimed,” Quilico said.

He went skydiving at the end of that summer, and embarked on his first triathlon. By 2011, he was competing in his first half Ironman competition.

In 2016, he participated in his first full Ironman in Lake Placid, New York. Not only was it the 10 year anniversary of his accident, he was also able to raise over $10,000 for Brain Injury Canada.

Quilico earned his bachelor’s degree in education in 2012 and his master’s degree in adapted physical activity in 2015. He also became a part-time personal trainer.

He’s currently pursuing his PhD. in rehabilitation sciences to help others who have suffered traumatic brain injuries in their own recovery.

He has developed a program that spans from nine to 12 months to help patients with their own rehabilitation.

There are three big phases involved in his research. The first phase is learning how to train safely and efficiently, phase two is learning about how to exercise independently, and the third phases involves training patients for a big sporting challenge.

Quilico also wants to determine how the program affects participants’ moods and quality of life. He’s grateful to be living his life to the fullest.