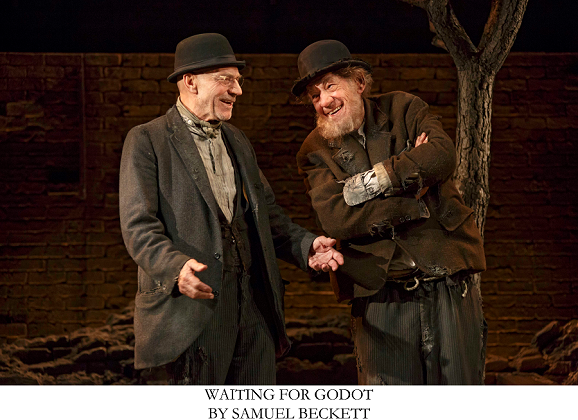 Classical music audiences are familiar with original instruments performances but theater goers rarely get to see historically accurate revivals of classic works. Thanks to the London Globe theater, we now have the option of two of Shakespeare’s plays, “Twelfth Night” and “Richard III,” done in mostly authentic productions. (The original pronunciations are not used because a modern audience wouldn’t tolerate them.)

Both plays are directed by Tim Carroll and star the always astonishing Mark Rylance. From the time the audience enters, and for these two, you should arrive at least half an hour early, the musicians are playing the entrancing scores by Claire van Kampen on Elizabethan era instruments. The stage is lit with candles and the actors get into costume. As in Shakespeare’s time, the men play women’s parts.

In “Twelfth Night,” Duke Orsino loves Olivia, who is mourning the loss of her brother, Sebastian, who is not really dead.  Viola arrives in Illyria after a storm at sea and pretends to be Cesario. Orsino asks his new page to woo Olivia for him, but Viola/Cesario promptly falls for the Duke and Viola goes for Cesario.  Sebastian arrives and he wants Olivia. Into the mix is the pompous Malvolio, Olivia’s servant, who also has a secret passion for his employer and is ultimately humiliated. The other romances are all sorted out at the end.

Rylance is the homeliest Olivia in memory but also the funniest.  The rest of the cast is hilarious as well, with the multi-talented Stephen Fry making a rare and most welcome appearance as Malvolio, Samuel Barnett a vivacious Viola and Liam Breannan as Orsino.

Playing the title role in “Richard III,” Rylance’s interpretation is completely original. The character is a villain, a cold-blooded murderer, but somehow evokes laughter along with the horror.  Angus Wright is his co-conspirator, and ultimately victim, Buckingham. It’s hard to believe that the same actor who was so goofily funny in “Twelfth Night” has such a strong dramatic presence in the tragedy. Samuel Barnett is Elizabeth and Joseph Timms is Lady Anne, who is part of one of the strangest seduction scenes ever penned. I confess, though, that compelling as these gender switches, the Lady Anne of my imagination is still Claire Bloom in the Olivier film. That said, no theater lover should miss these plays, which are performed in repertory at the Belasco Theater (111 West 44th St.; 212-239-6200) through February 2nd.

Two more British stars, Patrick Stewart and Ian McKellan, are appearing in Beckett’s “Waiting for Godot” (emphasis on the first syllable) and Pinter’s “No Man’s Land.” Director Sean Mathias stresses the humor and, as Vladimir and Estragon, there is a real chemistry between the two master thespians. They have strong support from Billy Crudup (very agile in Godot and sounding convincingly English in the Pinter) and Shuler Hensley, putting on different accents in the two plays. “No Man’s Land” has a more upscale setting than the Pinter but the laughter is mixed with menace. The two plays are running at the Cort Theater (138 West 48th Street, 212-239-6200 through March 2nd.

Lincoln Center’s production of “Macbeth,” directed by Jack O’Brien, starts auspiciously with three actors playing the witches: John Glover, Byron Jennings and Malcolm Gets. Raving about the witches in “Macbeth” is like leaving a musical humming the scenery. Something must be wrong and the culprit is Ethan Hawke in the title role. While he is energetic, as usual, the beauty of Shakespeare’s language is completely lost. Daniel Sunjata, a fine Macduff, or Brian D’Arcy James playing Banquo, would be better choices than Hawke. The cast also features the always superb Richard Easton as Duncan and Anne-Marie Duff as Lady Macbeth. Not to nitpick, but the royal couple can speak with English, American or Scottish accents. However, they should at least sound as if they are from the same country. “Macbeth” is running at the Vivian Beaumont Theater until Jan. 12th.