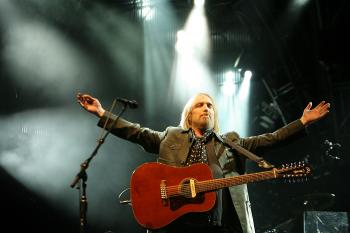 The year 2008 has been an unprecedented one for summer music festivals across the nation, blazing a new path for the live concert experience. The unique four-day hippie jamfest Bonnaroo camped out for its sixth year in Manchester, Tennessee, along with Chicago’s famous Lollapalooza making yet another huge splash with three days filled with music and art. Coachella Valley Music and Arts Festival rocked the West Coast, as it usually does, but the real glory goes to the first-ever Outside Lands Festival held August 22–24 in Golden Gate National Park in San Francisco.

Superfly Productions (the guys who introduced Bonnaroo) felt that it was time to show some love to the people of San Francisco with a music festival set across the landscape of one of America’s most beautiful and historic national parks. The Outside Lands Festival lineup featured many well-known bands and musicians such as Radiohead, Tom Petty, Jack Johnson, Beck, Manu Chao, Wilco, and Primus who headlined on each of the venues two biggest stages Friday through Sunday nights.
It was estimated that 60,000 tickets sold on the first night alone, with extra buses and trolleys set up to transport the festival attendees in and out of the city.

The festival air was a chilly August San Fran temperature, provoking long sleeves and jeans and complementing the earthy scenes that lay background to giant stages and circus-style tents.
Vendors lined each side of the park selling burgers, pizza, and exquisite foods to satisfy any taste. A tavern featuring wine tastings of California’s most popular grapes sat alongside a lounge area where concert viewing from a distance was made possible. Virgin Music Stores had a tent area with all the CDs and DVDs of the weekends’ artists moderately priced at $10–$15.

The time in between the main headlining acts was filled with many talented bands, singers, and performers playing to large crowds of enthusiastic and supporting fans. New York’s Ragina Spektor was the perfect blend of beauty and quirkiness, honing her passionate, sporadic style with a grand piano and Tori Amos-influenced driving intensity. Broken Social Scene was easily as inspiring, delivering an unforgettable big band experience incorporating as many as 10 musicians onstage. Singer Kevin Drew ignited the crowd into a unified release of angst, energy, and “all the times you’ve been hurt”—bonding each and every person together for a 20-second crowd roar, purging the most negative of feelings.
The 8:00 p.m. Radiohead show was a thick blanket of musical travelers forming a giant sea of bodies spanning the length of the park. Easily over 20,000 fans waited in anticipation as the giant stage was constructed and molded to fit the eclectic U.K. band’s performance.

Lightshow equipment was hung like multicolored stalagmites, which enhanced each song—casting down “Matrix”-inspired projections of green computer code, electric reds, and icy blues. The band played many tracks off the new album as well as “Fake Plastic Trees,” Airbag,” and “Talk Show Host.” Radiohead is now credited as the first band to ever play at night in Golden Gate Park.

“America’s Greatest Band,” Wilco, closed out the groundbreaking new festival on Sunday. The country-roots band played through many songs from their commercially successful album “Yankee Hotel Foxtrot,” along with the popular “California Stars” and a few tracks off their latest disc.

Three days, many great bands, and many excited fans—it was a grand mix for the first-ever Outside Lands Festival. An immersive San Francisco atmosphere with incredible views was the perfect touch in creating a festival that will live on for many years to come.