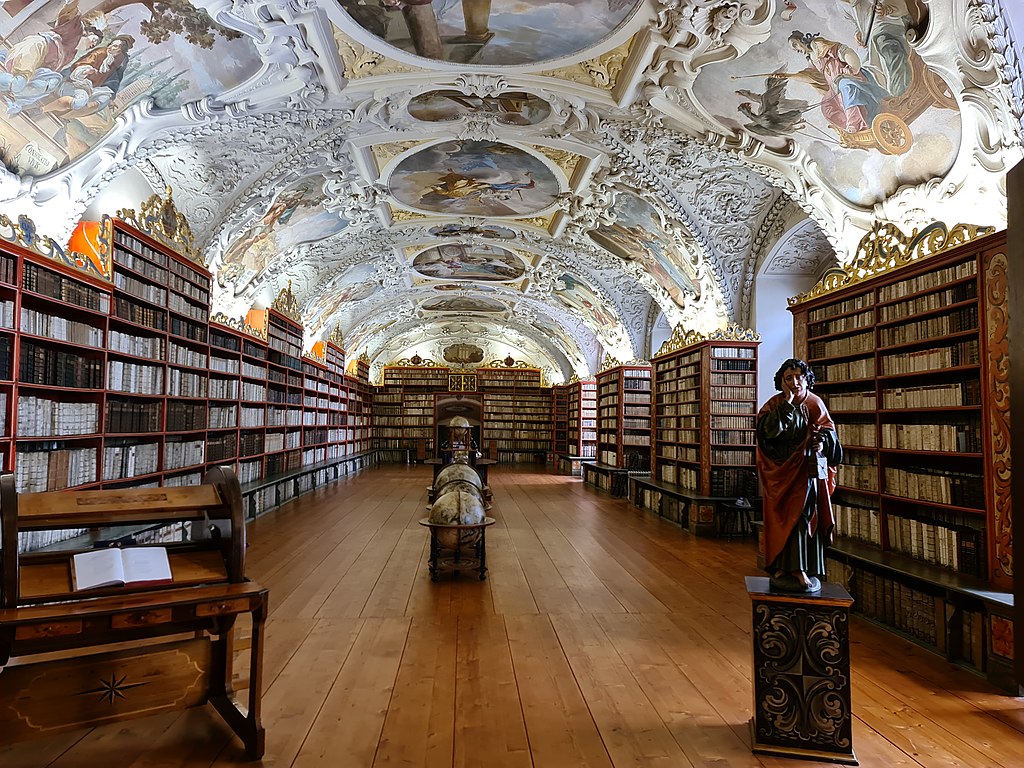 During the Middle Ages, libraries were a bastion of civilization. The library of the Strahov Monastery. (RicardaLovesMonuments/CC BY-SA 4.0)
Books

Our Libraries: Bastions of Books, Culture, and Community

Libraries, private and public, have long served as treasure houses of culture. The most famous library in the ancient world was the Great Library of Alexandria. That vast collection of scrolls helped make the city a chief intellectual center in the Mediterranean for centuries, until the library entered a slow decline because of a fire and a lack of funding during the Roman period. The emperor Trajan founded The Bibliotheca Ulpia in Rome in A.D. 114, another famous repository of literature and historical documents.

From the early Middle Ages onward, monasteries and later universities like Oxford, Paris, and Bologna preserved manuscripts and expanded their libraries. These treasures helped spark the Renaissance and an interest in history and philosophy, which led in turn to the creation of even more libraries and a vibrant interest in book collecting among the wealthy.

Here in America, the Founding Fathers also understood the importance of libraries. Ben Franklin was one of the creators of The Library Company of Philadelphia, an organization that remains in existence today. Other towns and cities followed his idea of a subscription service, whereby patrons paid a certain fee for the privilege of borrowing books. After the British burned the congressional library, in 1815 Congress bought Thomas Jefferson’s enormous collection of books, which served as the foundation for today’s Library of Congress. Less than a century later, steel mogul Andrew Carnegie spent over $60 million of his fortune to build more than 1,600 libraries around the country.

Carnegie’s gift of libraries, and those by other men and women who founded various types of public and university book collections, had an enormous effect on the nation’s growth. Writers as diverse as Isaac Asimov, Ray Bradbury, and Betty Smith of “A Tree Grows in Brooklyn” fame all credited the library for their education. Many others used the library as an information center for research in business, commerce, and agricultural techniques, for study in school, and for expanding their knowledge of the trades.

These libraries served other important functions as well as the imparting of knowledge. On those shelves and in those stacks were books about Western culture, histories, and biographies that kept alive the memories of past traditions, figures, and events.

Libraries have nourished creativity not only in adults but also in children. In the online article “12 Ways Libraries Are Good for the Country,” we learn that Gallo wines, I Can’t Believe It’s Yogurt, and the billboard company Metromedia owe their existence and wealth to young entrepreneurs who used the library for the research that would grow their dreams.

As this same article states, libraries also indicate “the extent to which a democratic society values knowledge, truth, justice, books, and culture.” That noble statement comes to us from the American Library Association. But does it still hold true today?

Some patrons lodge complaints against the library these days. Parents have become distressed when a few of these institutions have sponsored a transgender reading hour. Some libraries include books aimed at adolescents and children that are blatantly pornographic. And from all sides of the political spectrum, people often disapprove of some of the selections that make their way onto the library shelves.

At least one librarian has spoken out about the political correctness that has now infected some libraries. In “Watching My Beloved, Once-Eclectic Library Become Just Another Bastion of Orthodoxy,” retired librarian Greg Barkovich takes to task some former colleagues for their one-sided selection of books and their adaptation of partisan politics. He begins his essay by quoting a New York Times op-ed by sociologist Eric Klinenberg: “Libraries stand for and exemplify something that needs defending: the public institutions that—even in an age of atomization, polarization and inequality—serve as the bedrock of civil society.”

After delivering some examples of how libraries have become more politicized, Barkovich writes: “Certainly, it is possible to be highly progressive (or conservative) in one’s personal views while also being careful to maintain an objective approach in one’s professional life.” He then notes that “ideological commitments” have recently blurred these former boundaries. Many library directors have “seemed to more openly take on the role of activists,” he reports, “and their staff quickly learned to fall into line.” As a remedy, Barkovich calls on library boards and local politicians to restore balance to this situation.

The materials found in our public libraries reflect our current culture in other ways as well.

In my local library, for instance, I recently undertook an informal inventory of the books. James Patterson novels? With duplicates, I counted more than 140 of that author’s novels. There were 34 Lisa Jacksons on the shelves, dozens of books—most of them “modern romances” that qualify as pornography, and scores of volumes by writers like Dean Koontz and Stephen King.

And here’s another huge change in reading preferences over the last 20 years. In the adult section, I found approximately 1,120 graphic books. In the young people’s section, there were at least 1,600 of the same. Are these additions an indication that we have become dependent on pictographs—essentially what used to be called comic books—for communication rather than the written word? Perhaps. But judging by how few of these books seemed to be in circulation, it’s safer to say that we’re becoming a culture that reads few books, graphic or otherwise, but would prefer to poke about on digital media.

Which brings me to this point: Thirty years ago, whenever I visited the library, there were adults reading books. On my recent visit on this particular morning, 10 patrons were seated in the adult section, each of them on a computer or mobile device. No one was reading a book.

Now for the Good News

On that same visit, my public library was offering a well-attended children’s singalong. Throughout the week, it also hosts adult and teenage book clubs, story and craft hours for adolescents, a tiny book shop that raises money for the library and also allows patrons to pick up some marvelous deals, and other activities.

Present that day as well were several bands of homeschool families: moms surrounded by a tribe of kids, all of them loaded down with books from the children’s department. In the vestibule was an older woman tutoring two children in mathematics. In one of the conference rooms was a small class of students, undoubtedly homeschoolers since it was a school day. And sitting in a corner of the young adult section was one of the most beautiful sights on the planet: a young reader utterly absorbed in a book.

If we want to keep our libraries alive—and I do—we must realize that they are businesses offering goods to the community. Chief among these commodities are the books on the shelves. Most libraries must justify their continued existence by a variety of criteria, one of which includes the number of books in circulation. This explains those 140 copies of the James Patterson novels in my town’s library. It’s simple, really—patrons prefer Patterson to Walker Percy. It also explains why my public library is so fond of those book-loving homeschool kids. As one librarian once told me, “Thank heavens for them! They help keep us afloat.”

Unfortunately, and unlike those youngsters, adult Americans these days are reading fewer books than in the past. In her excellent article “You Don’t Read as Many Books as You Think You Do,” Emmarie Hodge points out that the average bookworm actually spends only minutes a day reading a book while at the same time devoting hours to television or a computer screen. She writes: “According to the Pew Research Center, the average adult American reads 12 books a year, with half of Americans reading 4 or less. Those with a college degree do pick up more books at 17 a year, with half reading 7 or less, but it’s not that much of a difference in the grand scheme of things.”