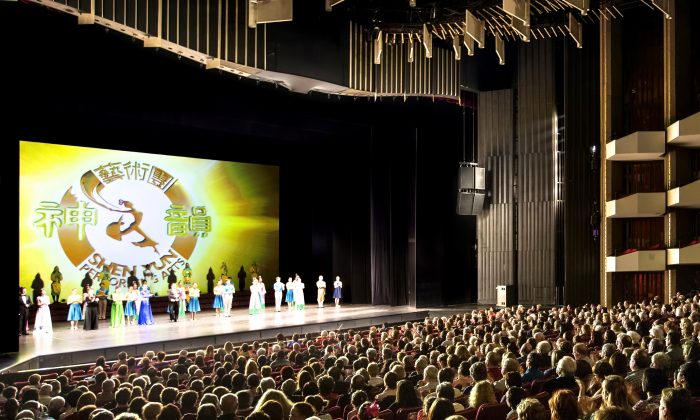 The cast of Shen Yun Performing Arts says goodbye to Ottawa after their final performance at the National Arts Centre on Jan. 4, 2015. (Evan Ning/Epoch Times)
Company

Although snow and freezing rain blanketed the National Capital Region over the weekend, thousands of enthusiastic theatre-goers braved the icy conditions to take in Shen Yun Performing Arts, which wrapped up its Ottawa performances on Sunday, Jan. 4.

The celebrated classical Chinese dance and music company performed four shows at the National Arts Centre from Jan.2 to 4, to much acclaim.

“I think it is very marvellous, brilliant,” said Bruce Linghu, Taiwan’s Ambassador to Canada, after the finale performance. “Everyone watching the show would find it breathtaking.”

“It was just amazing, I was blown away,” echoed NDP MP Ruth Ellen Brosseau after the Jan.2 performance.

New York-based Shen Yun is on the Canadian leg of its global tour, fulfilling its mission to revive 5,000 years of divinely inspired traditional Chinese culture. Based on the three pillars of Buddhism, Daoism, and Confucianism, this ancient culture was systematically destroyed by the communist regime, says the Shen Yun website.

Everyone watching the show would find it breathtaking. — Bruce Linghu, Taiwan’s Ambassador to Canada

Conservative Party of Canada Senator Thanh Hai Ngo said Shen Yun is an excellent showcase of ancient Chinese culture and art forms, and one of the best shows to ever grace the NAC.

“I think it’s excellent. … It’s interesting,” he said after the Jan. 3 performance.

“For the Canadian people who do not know the Chinese culture, I think this is the best [show] for them to know.”

Bulgaria’s ambassador to Canada Dr. Nikolay Milkov was also at the Jan. 3 performance and said China’s traditional culture represented the true spirit and legacy of the Chinese people.

“It seems to me that the tradition is much bigger than the political influences that are coming and going with centuries. It [tradition] goes through centuries and it will last forever.”

“It’s a fantastic way to start off the New Year. I feel rejuvenated and filled with love and joy from watching the show. You can feel the energy from all the performers,” he said.

Canadian artists and dancers were also generous with their praise for Shen Yun’s artistic elements, including the choreography, technique, costuming, and high-tech digital backdrops.

“This performance is absolutely amazing … the colour of the costumes, the choreography is absolutely beautiful, the dance, and the music, everything balanced together—absolutely great,” said veteran fashion model Joel Bourdeau, who has been in the business for 20 years.

“It was, wow, nostalgia. Took me back to when I was on stage. … I could hear the music and I wanted to dance,” she said.

“All of the performers have great stage presence. Their technique was impeccable,” said another former dancer, Susan Nault, who attended on opening night.

Shen Yun’s music, produced by a live orchestra that includes traditional Chinese instruments, wowed musician Karl Reznick, who has played in a band for 40 years at venues in Ottawa, Toronto, and Montreal.

“I love it,” he said. “Especially the traditional instruments, the sounds they produce, from the coughing of the horses, the neighing and whinnying of the ponies—it really invigorates the steps of the dances, I find.”

Marco Pagani, president and CEO of the Community Foundation of Ottawa, said Shen Yun “touches all your senses” and was impressed by the interaction between the dancers on stage and the vibrant, digitally animated backdrops.

“The way they integrate the dance, the music, and the visuals, and the back with the video (backdrops)—it’s truly a multimedia spectacle, and I think they do it spectacularly well with just a ton of grace. The grace truly comes out,” he said.

Michel Cavallin, executive director of operations, at the Royal College of Physicians and Surgeons of Canada, said the backdrops helped to portray the spiritual themes in the performance.

“With the screens in the background and the dancers popping up, it makes it three-dimensional. It very much relates to the spirituality of each of the pieces with the deities coming to life,” he said.

Shen Yun has been performing to full houses in Ottawa each year since 2007. The company has since attracted a loyal following, with some audience members making Shen Yun an annual tradition.

Former Canadian cabinet minister David Kilgour has seen Shen Yun many times, and says the performance is an outstanding effort that represents hope for China’s future.

“I am enormously encouraged by this [performance]. It’s an artistic achievement, unparalleled achievement,” said Mr. Kilgour, who has long worked to advance human rights in China.

Politician turned policy adviser Joel Bernard who saw the performance this year for the third time, said Shen Yun showcases the height of the China that once was, and could be again.

“When you sit through one of these [Shen Yun performances], you fall in love with China,” he said.