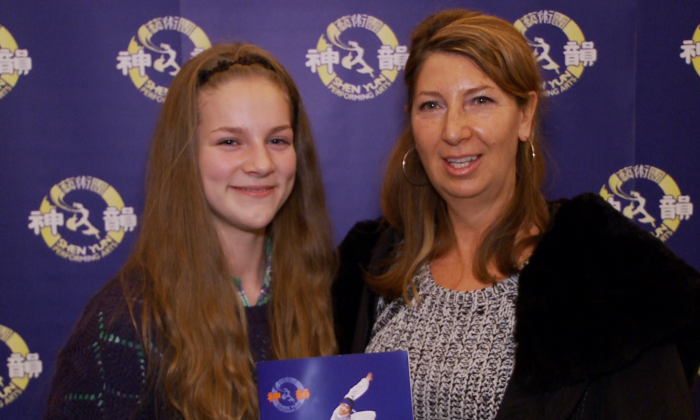 Carol McLeod (L) and her granddaughter Madison McDonald admired the skill of the dancers in the Shen Yun Performing Arts production at the national Arts Centre in Ottawa on Jan. 4, 2014. (NTD Television)
Arts & Culture

OTTAWA, Canada—Shen Yun Performing Arts’ engaging depiction of Chinese traditional culture through music and dance left Yves Dupuis with a feeling of serenity after he saw the show at the National Arts Centre on Jan. 4.

“I feel peaceful. I feel so great. Such beautiful, beautiful dance, and the atmosphere was very peaceful. I loved it. I really appreciated the show,” he said after the performance, which drew a full house despite freezing rain and treacherous driving conditions.

Mr. Dupuis, a retired government economist, said he was cognizant of the hard work the dancers must have put in to reach such a high calibre.

“[They] must have been training a lot to provide a performance like that. I’m very impressed.”

Carol McLeod, a consultant who owns her own business, said she wanted to see the show when it was in Ottawa last year and take her granddaughter, Madison McDonald, but she was out of the country. So this time she made sure to get tickets as soon as they came on sale.

“I was impressed by it,” she said of the performance.

“The skill of the performers is quite outstanding, the choreography, the social commentary under it all. There’s a lot of pieces to it. It’s really actually quite well done. I enjoyed reading about the individual dancers, principal dancers in the program in advance.

“Very, very talented people to make it all come together, make it look so easy. It’s not very easy at all.”

The skill and finesse of the dancers also impressed Ms. McDonald, a dancer herself.

“It was really impressing because what they’re doing isn’t easy and they did it with such grace. They made it look easy which it’s not. And it was really beautiful put all together,” she said.

Classical Chinese dance evolved over thousands of years, eventually developing into the vast and distinctly Chinese dance form that Shen Yun is reviving as part of China’s traditional culture. It can range from being elegant and sedate to involving combinations of leaps, turns, flips, spins, and other aerial and tumbling techniques.

“They were amazing,” Ms. McDonald said of the dancers. “They must have worked really hard to execute those moves really nicely.”

“Their technique is amazing and their skill is perfect.”

She said she particularly enjoyed Handkerchief Blossoms, a northeastern folk dance that welcomes the coming arrival of spring, the handkerchiefs depicting the plum blossom.

“It was very beautiful. Altogether they were all in sync and it just looked amazing. It looked very hard because when they threw it [handkerchief], and then they did a flip, and then they got up and caught it. That was amazing.”

Shen Yun will continue the Canadian portion of its world tour with shows at the Place des Arts in Montreal from January 7-11.