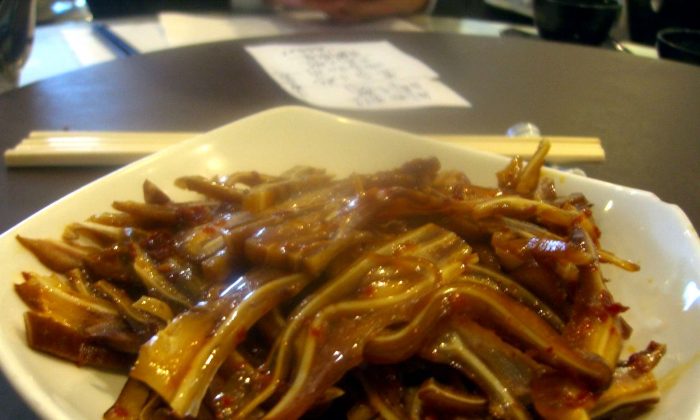 OTTAWA—”I was the most popular trading partner,” says 28-year-old Alton Wu with a laugh. He is not referring to international trade relations, but to the popularity of the contents of his lunchbox when he was a student at Henry Larsen Elementary School in suburban Ottawa.

His father, Eugene Wu, nods in agreement, a delighted smile spreading across his face as he proudly serves gua bao to guests at his restaurant Brother Wu on St. Laurent Boulevard.

An exotic version of the hamburger, gua bao is a portable and delicious snack that the younger Wu’s school friends clamoured to exchange for the tuna sandwiches and other more mundane contents of their own lunchboxes.

Gua bao is a popular street food in Taiwan and one of several dishes that originated in the kitchens of the Hakka people. The Hakka are an ethnic Chinese group whose ancestral homeland was in Hakka-speaking Chinese provinces such as Guandong and Fujian, and who migrated to other parts of China, Taiwan, and other countries like India and Canada. Their language, Hakka, is a dialect of Mandarin Chinese.

To make gua bao, tender slices of braised pork belly are wrapped in a fluffy steamed bun (more like a mini-pancake made of wheat flour) and garnished with pickled mustard greens, cilantro, ground peanuts, and spices, creating a mini-street festival of textures and flavours. (Recipe below)

The elder Wu points out that while the ingredients might sound exotic, the buns, pork belly, and other ingredients are readily available to Canadians at TNT, a supermarket chain specializing in Asian foods that was originally owned by Taiwanese entrepreneurs Jack and Cindy Lee, but is now part of the Loblaws company.

About 18 to 20 percent of the population of Taiwan claim Hakka ancestry, says Wu, resulting in many Hakka traditions becoming an integral part of Taiwanese culture.

Authentic Hakka food is seldom found outside the homes of Hakka people, although Hakka Indian restaurants are proliferating in Toronto and Vancouver, serving dishes that Hakka people adapted when they migrated to Kolkata, India, in the 19th and 20th centuries.

Wu says he thinks that the Ottawa gourmand is ready to be introduced to Hakka cuisine, but takes a practical, step-by-step approach to it.

He has created a menu that consists mainly of dishes that are more familiar to Canadians, such as sweet and sour chicken balls and shrimp chop suey.

But guests who wish to enjoy traditional Hakka food are welcome to call him 48 hours ahead of their intended visit and request specially prepared Hakka dishes.

Gua bao is a popular street food in Taiwan and one of several dishes that originated in the kitchens of the Hakka people.

Wu says that as a child in Tongluo Township in the mountainous rural County of Miaoli in Taiwan, where his family owned a farm, special dinners were likely to include shredded pork belly with a special dried and marinated cabbage, or stir-fried seafood with dried bean curd.

Wu has fond memories of these special days when such feasts were served.

One was “Tomb-Sweeping Day.” The entire family, including those who had migrated to cities, would reunite every  year on the 15th day after the spring equinox, around April 4 or 5, a very special time in an ancestor-worshipping culture. Families go on picnics and hikes after cleaning and beautifying the tombs of their ancestors, and offering them food and drink.

Alton Wu, who was born in Canada, has visited his grandparents in Taiwan several times. His grandmother, of course, would pull out all the stops to ensure that her grandson had the best meals of his life.

“We had a lot of Hakka food—fresh chicken straight from the chicken coop on the farm, fish, and vegetables,” he says. “But my favourite was chicken.”

His father has trained his executive chef Qu-Delin to recreate this chicken dish. Named three-cup chicken after its three key ingredients, it is a Hakka dish that has become a staple of Taiwanese cuisine. Bite-sized chicken pieces are cooked in sesame oil with soy sauce and rice wine. Its flavour is intensified with garlic and ginger.

Other Hakka favourites are deep-fried tofu, a light, crisp appetizer, and a special Hakka stirfry.

One particular favourite on the regular menu is General Tsao’s chicken. While not strictly Hakka, Wu says it has an interesting Taiwanese connection.

The dish was hastily concocted in Taipei when then-Premier Chiang Ching-kuo, the son and successor of President Chiang-Kai Shek, walked into a restaurant late one night and demanded food. The chef presented this dish, along with a story to make it more impressive. He said it was the favourite of General Tsao of the Ching dynasty era who had defeated the British during the Boxer Rebellion, an anti-British uprising in China between 1899 and 1901!

Fry pork slices in frying pan until slightly crisp. Add all the other ingredients except shredded preserved cabbage and cook for at least one hour, or until the pork belly is very tender.