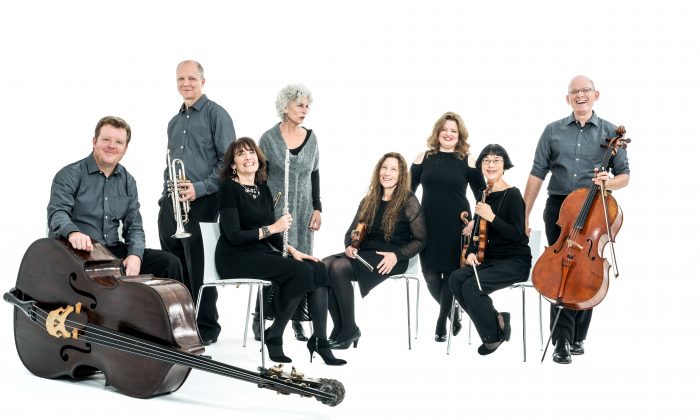 Orpheus Chamber Orchestra doesn’t have a single conductor—it has dozens.

The Grammy Award–winning ensemble consists of anywhere between 20 and 40 musicians who each have an equal say in every piece they perform.

During rehearsals this means any of the musicians may be asking, Is this tempo working? What colors do we want to bring out? What kind of breathing room do we want to give this phrase, and what are the musical nuances of that phrase? Well, how about we play it and see?

Then on stage, there is a higher level of physicality than audiences typically see in an orchestra. Section leaders are giving cues, leading with their bodies, the musicians constantly look to each other, while soloists face the audience to project their sound out.

At the heart of Orpheus, formed in 1972, is a democratic creative process and willingness to collaborate among all colleagues.

This is an ensemble made of musicians who want to have an effect on the end result, to be completely involved in an artistic presentation, and to feel like their voices are heard in the process of bringing a great score to fruition.

It starts with the score.

Usually, the musicians in an orchestra work together to bring the conductor’s vision to fruition. The conductor interprets the music and in effect becomes an intermediary between the musicians and the composer, Wyrick said.

In Orpheus, like with a chamber ensemble, there is no such figure to follow, so the musicians all study the full orchestral score.

First, a group of core musicians for the piece—section leaders—hash out a framework for the interpretation. Then at the first rehearsal, it might all change. Anyone can contribute anything at any time.

Up close, there are nuances and details in the playing and interaction between musicians that might never be heard or seen, Wyrick said. So in the rehearsal process, they also have people take a spot in the audience to see what is translating beyond the stage and what needs more enunciation.

“You want to project true from the music directly through to the audience, and you’re the person that can do it, if you have the skills,” Wyrick said.

The performances also require the musicians to be nimble—there’s a spontaneity that’s unique to chamber ensembles, said Alan Kay, a clarinetist and Orpheus artistic director. “Even from performance to performance, things can change. … Someone might be feeling something differently one night.”

“It means a high degree of listening,” said Kay, “More so than in a conducted, normal symphonic situation where your eyes are really glued to the conductor. Our eyes—and more importantly, our ears—are glued to each other so we can make changes at the drop of a hat.”

For bigger symphonic works, this can be a challenge. And because everyone needs to be able to see each other, there’s also a limit on how many people can be onstage at once.

Take Beethoven’s Fifth Symphony, which Orpheus tackled just four years ago. The musicians knew they would not have the mass—the sheer number of strings—usually associated with that symphony, but the musicians wanted to be able to bring their style of playing to the piece as well.

This is a piece that has been played thousands and thousands of times, Kay said. It could be “easy to sit back and let it play itself.”

“But to explore it, to dig in, to try to find new things about it, to try to make it feel new and fresh, is a great challenge, and that’s what we always try to do,” Kay said.

“We’re all involved in collaborating in a final artistic product, the music making at the highest level.

“We want to present a strong point of view about a piece as we possibly can. Not just let a piece fly by, but to really present a piece with a perspective.”

Orpheus, which presents a program at Carnegie Hall every season, was founded by a group of musicians who wanted to create an orchestra with the intimacy of a chamber ensemble. The idea was that all the musicians involved have good ideas and a vision for the pieces they perform and want to contribute them.

In the orchestra world, this is an anomaly.

Orpheus’s democratic approach to the creative process eventually became the subject of a Harvard Business case study, which drew attention in the education and business fields. The group’s leadership and decision-making process, called the Orpheus Process, has even been trademarked, and musicians have brought it into school programs over the years.

It’s not always easy. It involves leadership, interaction with other players, negotiating ideas, diplomacy, and facilitating a means to consensus and agreement, Wyrick said. “It is so much about communication within the ranks directly—directly with the musicians and directly with the score as well.”

In many interviews and case studies, musicians expressed great satisfaction with the work and art. The quality of music has also only increased as Orpheus matures, according to critics (and shown by increased ticket sales). Researchers including the late Harvard psychology professor J. Richard Hackman and FastCompany founder William Taylor credit the sense of responsibility the musicians feel.

On Dec. 3, Orpheus will play Mozart’s Piano Concerto No. 21 at Carnegie Hall with pianist Fazil Say, as well as “Silk Road,” a piece composed by Say.

The process is still collaborative with input from all sides, but in these cases, the soloist is basically a leader among leaders, Kay said. “If we’re doing a Mozart piano concerto, we’re usually playing it with a pianist who’s played it a hundred times before. We want to know, we want to understand what their interpretation is. We want to get as close as possible to representing that person’s views as we can.” The same goes for when they are playing with the composer as a soloist.

“Somebody once said our job as musicians should be to make old music sound new and to make new music sound old—I think that’s really great and I think it’s true,” Kay said. “With a brand new piece of music, we want to make it sound so convincing that an audience is willing to give it a shot.”

Orpheus sees itself as part of the long continuum of classical music. In addition to playing new works by emerging composers, the ensemble has also commissioned about 50 new works to date.

“Part of keeping classical music alive is creating new classical music. That has always been so,” Wyrick said. “We’re hoping we can expand the canon of our art form.”