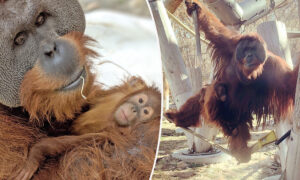 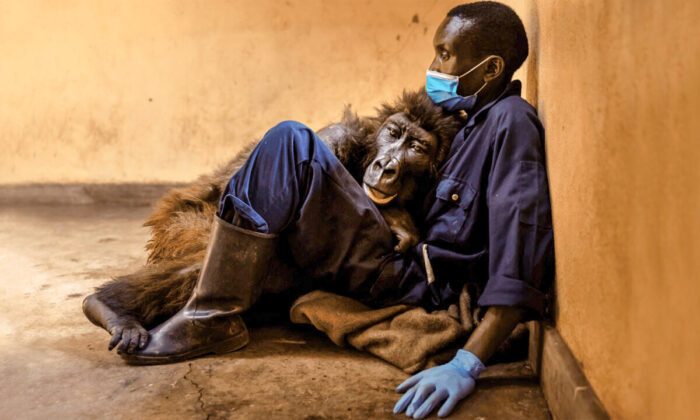 Orphaned Mountain Gorilla, 14, Dies in the Arms of Her Caretaker: ‘I Loved Her Like a Child’

An orphaned mountain gorilla from Africa, who became renowned after a selfie with a park ranger went viral, died in the arms of her caretaker and “lifelong friend.”

At the age of 14, Ndakasi, the beloved gorilla that had been cared for at Virunga National Park’s Senkwekwe Center in the Democratic Republic of Congo for more than a decade, took her last breath on the evening of Sept. 26. Her condition had deteriorated following a prolonged illness, according to a statement by the park.

“It was a privilege to support and care for such a loving creature, especially knowing the trauma Ndakasi suffered at a very young age,” caretaker Andre Bauma said. “I am proud to have called Ndakasi my friend.”

The mountain gorilla, who was born to the Kabirizi group in April 2007, was only 2 months old when she was found by Virunga rangers clinging to her mother’s lifeless body.

Nyiransekuye, Ndakasi’s mother, had been “gunned down by armed militia.” Rangers then became aware that there were no family members present to care for the infant gorilla and they thus nursed her back to health and immediately transferred her to a rescue center in Goma, where she was introduced to Andre.

During the first night, Andre kept the baby gorilla on his bare chest providing the warmth and comfort she needed. Luckily, Ndakasi survived.

However, she wasn’t able to make her way back to the wild because she was still dealing with the trauma of losing her family and was vulnerable due to the long period of rehabilitation.

In 2009, Ndakasi was transferred to the Senkwekwe Center—the only facility in the world that cares for orphaned mountain gorillas—where she went to live a happy and peaceful life with other mountain gorillas and caretakers for over a decade.

Over the last few years, Ndakasi’s heartwarming personality began to shine through. She was featured in many television shows and movies, including a 2014 Netflix documentary called “Virunga,” where she won audiences’ hearts with her laughter while being tickled by her caretaker.

In 2019, Ndakasi became a viral sensation when she photobombed a selfie of park ranger Mathiew Shamavu. The picture, which was taken on Earth Day, shows Ndakasi and fellow orphaned gorilla Ndeze posing with their bellies out.

“I loved her like a child and her cheerful personality brought a smile to my face every time I interacted with her,” Andre said. “She will be missed by all of us at Virunga but we are forever grateful for the richness Ndakasi brought to our lives during her time at Senkwekwe.”

Ndakasi, according to the statement, embodied the spirit of Virunga, and “her story of survival is interwoven with that of the Park’s.”

The global population of mountain gorillas was critically endangered when Ndakasi was born. However, through the years, the species has grown by 47 percent; from 720 individuals in 2007 to an estimated 1,063 in 2021.