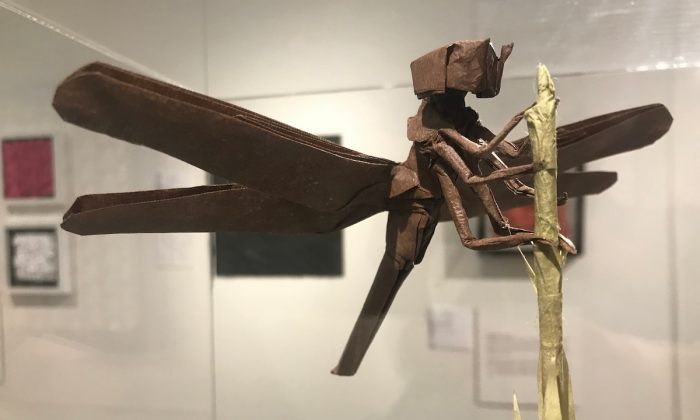 Origami: A Relationship Between Mathematics and Art

NEW YORK–The relationship between mathematics and art has always existed. From ancient civilizations, to the Renaissance, to present day, mathematical ideas have been illustrated in various artistic mediums. This relationship is now on full display at the National Museum of Mathematics, which is featuring an exhibition entitled “Math Unfolded: An Exhibit of Mathematical Origami Art.”

The museum, in association with OrigamiUSA, has debuted an exhibit featuring complex origami artwork by 24 different artists.

OrigamiUSA Chair of the Board Charlene Morrow and President of OrigamiUSA Wendy Zeichner co-curated the exhibit with the museum, which will run from July 27, 2019 through Jan. 3, 2020.

Not only did Morrow and Zeichner curate the exhibit, they have both had a passion for origami for over 30 years.

Morrow was developing a mathematics program for high school students, and encountered an origami book. She quickly became interested in the art form, and created an origami and geometry workshop for her students.

Zeichner had gone to Disney World in Florida with her husband in 1987, and were at the Epcot Center in the park. There was a Japanese pavilion, and vendors were selling origami paper and books. She bought some paper and books to give to a friend to decorate her Christmas tree.

That evening, she began reading the book, and quickly began making origami. Before she knew it, she had used nearly all of the paper. Her passion for origami was born.

“I just found origami to be so enchanting,” Zeichner told The Epoch Times.

The purpose of the exhibition was to present a series of origami art pieces that have a significant connection with mathematics. There have been numerous origami exhibits in other galleries, but none had focused on the relationship between mathematics and art.

Both Morrow and Zeichner are deeply involved in the origami community, which helped them curate the exhibit. They came up with a list of origami artists whose work deeply employ mathematics.

“Beyond the technicality, it was really fun and interesting to choose a set of artists,” Morrow said.

The 24 artists use mathematics in their work in many different ways, and used many different materials other than standard paper, ranging from vinyl to Japanese gold-edged polypropylene ribbon.

Dr. Robert Lang is a physicist by profession who has been making origami for over 50 years.

The exhibit features seven of Lang’s works, all seven of which are folded from one sheet of paper. Like all of the pieces in the exhibit, there are mathematical concepts behind his work.

For instance, his beetle-like piece (pictured above) features hex-plating, in which Lang uses a mathematical technique that operates on a grid of equilateral triangles in hexagonal array.

Lang hopes viewers realize how integral mathematics is in our everyday lives.

“I hope they take away an understanding of how deeply embedded mathematics is in diverse aspects of the real world, and even in a field, art, that you might not think mathematics would play a role in,” Lang explained.

Mathematics is often viewed as an abstract subject, and Morrow believes that origami is an effective way to illustrate and visualize mathematics.

At minimum, the art of origami features and illustrates geometry. Some of the more complex mathematical concepts behind the works include the Fibonacci Sequence, combinations and permutations, equations, fractals, and different algorithms.

Viewers are able to see the inherent beauty of the mathematics behind the works of origami.

“Even without thinking about math at all, they start to understand the beauty of mathematics by looking at the origami,” Zeichner explained.

Moreover, mathematics and art don’t have to be mutually exclusive.

“I think it’s important that people understand that you can be interested in science, and mathematics, and art at the same time, and that they can connect, and they don’t have to be separate realms,” Morrow said.

Not only is origami a medium for portraying mathematical ideas, the art form has real world applications. Proteins and DNA fold, and origami can help illustrate those biological functions. The folding aspect of origami also applies to airbag technology and medical stents.

“What ends up happening sometimes is that something that you explored for pure intellectual curiosity ends up having some usefulness in the world,” said Cindy Lawrence, CEO and director of the National Museum of Mathematics.