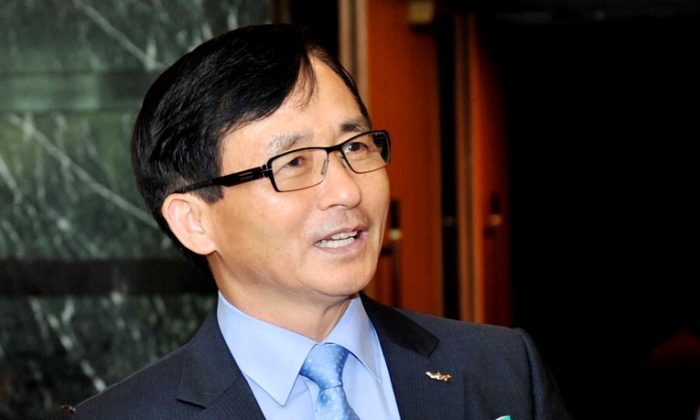 CHANGWON, South Korea—”I cannot fully grasp the meaning of the words ‘Shen Yun,’ which I understand to be some sort of bond between heaven, earth and human beings,” said Shin Sangjung. “But after seeing Shen Yun, I am enlightened to the fact that God’s oath to humans will certainly be fulfilled.”

Shen Yun is a New York-based classical Chinese dance company, which can be best understood by looking at its name. Shen means divine and Yun is translated as bearing, referring to the intent, spirit, and personal aura of a dancer, according to the company’s website. Together, Shen Yun means “the beauty of divine beings dancing.”

Mr. Shin explained “One of the songs states ‘The gods made an oath to deliver us to heaven.’ And I truly believe Gods will honor such oath.”

“We must have faith in Gods and live our lives to the fullest,” added Mr. Shin.

The lyrics that Mr. Shin mentioned is from the song “Divine Pledges Fulfilled” sung by soprano Song Tianling. Shen Yun vocalists use genuine bel canto tenor and soprano technique, which is different from alto or baritone singing styles, overcoming the technical limitations of singing in high registers, according to Shen Yun’s website.

“I am a Catholic. And I believe the concepts from the lyrics transcend all religions. I am just so touched,” said Mr. Shin.

Mr. Shin, a poet and the conductor of Budsori Choir, said good music can heal the mind and body. “My heart is filled with a serene sensation after hearing this Shen Yun music.”

“Whenever people mention China, an oppressive sensation inevitably follows,” said Mr. Shin. “But today, after seeing the dances and music from ethnic Chinese minorities, I feel this is something quite personal and dear to me.”

Mr. Shin said the dances also spoke to him. “The beauty of the Miao dance is like a fresh spring that will forever flow within my heart.”

Ethnic and folk dances, in addition to classical Chinese dances, make up the essence of Shen Yun performance. And from southern China the ethnic group Hmong, a sub-group of the Miao, is featured in the program In A Village of the Hmong.

“The story The Fable of the Magic Brush is excellent in using the mentality of painters to illustrate the heavenly principle of good is being rewarded with good and evil met with evil,” said Mr. Shin. “This innovative and original idea just resonates within my heart.”

The reality that Shen Yun cannot be seen in China did not sit well with Mr. Shin, who said “Art is above anything else, and China does not have the rights to oppose art in any form.”

“Shen Yun is showing the entire world authentic Chinese culture. China not only shouldn’t oppose Shen Yun on any ground, it should support Shen Yun, and give recognition for what it has accomplished,” said Mr. Shin.

Goh Hogon, chairman of Samsung Climate Control Co., was in attendance to see Shen Yun at Sungsan Art Hall Grand Theater on April 30. It was Mr. Goh’s third time to see the performance, and unlike previous years, this year he purchased 125 tickets to invite employees and family members to come along.

“The male dancers are very manly and the female dancers are not only very gentle, but they show what is it like to be a traditional Chinese woman. I am deeply touched,” said Mr. Goh.

Mesmerized by the interplay between the animated backdrop and the dance, Mr. Goh added “The stage and the background have united as one, as dancers jumping out from the background. So real and authentic. Simply splendid.”

Shen Yun uses a vividly animated backdrop to extend the stage to different realms, from snow-capped Himalaya to a heavenly palace. And to tell the story, performers interact with the backdrop.

“What Shen Yun put on stage is traditional Chinese tradition,” said Mr. Goh. “And I will recommend the performance to others.”