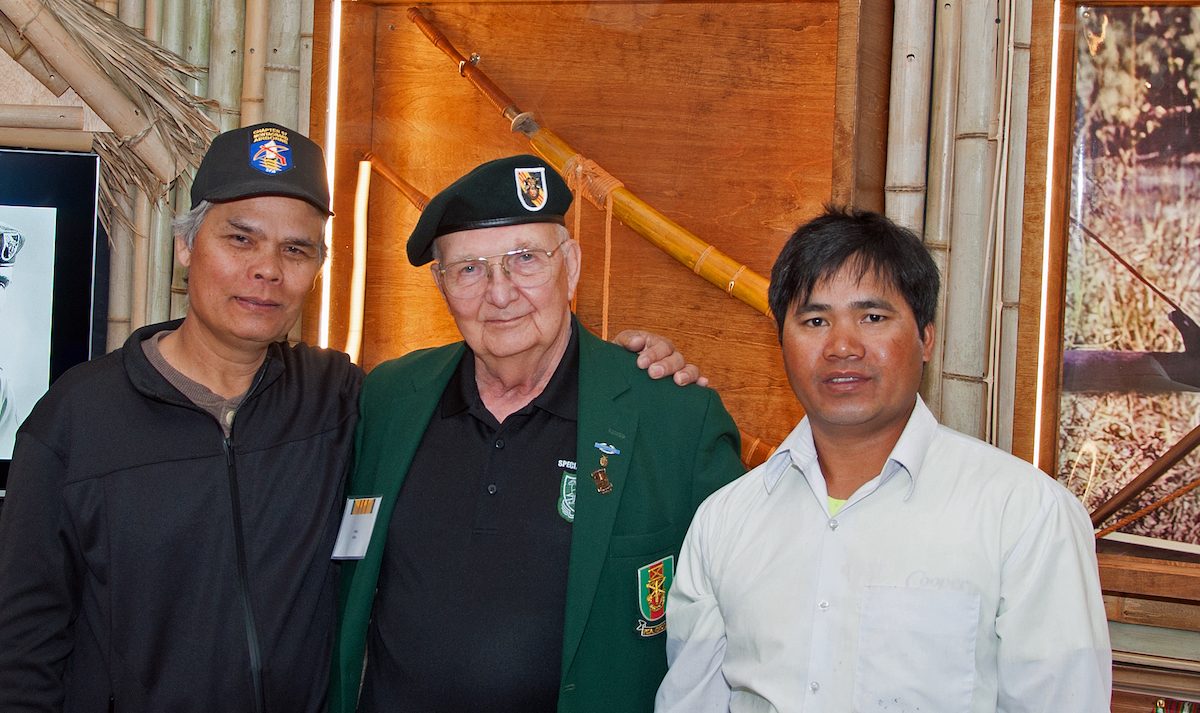 Mike Mika (C) was a Green Beret who served in the Vietnam War. He is the first participant in the Special Forces Oral History Initiative. (Courtesy of Lyle Hendrick and Mike Mika)
People

Oral Histories of the Green Berets

The Green Berets are one of the most elite units in the United States military and are known as the “quiet professionals,” as most of their missions are classified. Now, one former Green Beret is on a mission to record oral histories of Green Berets and their declassified stories.

Lyle Hendrick is 63 years old and lives in Columbia, South Carolina. Hendrick earned his Green Beret in 1983, and was on active duty until 1987. He was part of the 1st Battalion 10th Special Forces and was stationed in Bad Toelz, Germany.

If the Cold War were to get hot, his unit was to parachute behind Soviet lines to collect intelligence and perform demolition operations.

Years after Hendrick separated from the service, he decided to embark on a unique project called the Special Forces Oral History Initiative. The University of South Carolina’s Department of Oral History had a showcase in December 2018, where students were paired with a veteran, and the students recorded an oral history about them.

Hendrick wandered around the showcase and began to think that the Green Berets deserved to share their stories as well.

“Each one of us has a story, and I thought to even capture that and then put it into the collection would be a great service to them, to their family, to the community, and to history,” Hendrick told The Epoch Times.

The first participant, Mike Mika, had his oral history recorded with a tape recorder. In the future, Hendrick plans to use a tape recorder and a camcorder so that the words, emotions, and facial expressions can be captured.

Hendrick also hopes participants will share maps, photographs, and other historical documents to supplement the recordings.

Then the veterans explain their motivation behind joining such a tough unit as the Green Berets. Participants are free to share the experiences they had on active duty, such as a particular battle or conflict they were involved in.

Veterans are also encouraged to share the greatest lesson they have come away with from their experience as a Green Beret.

“There are plenty of stories, but the thing is to go beyond just the story, go on to a point where it can be collected,” Hendrick said.

Hendrick is also keenly aware of the high number of veterans who commit suicide. He thinks if a man’s story is heard and shared, a suicide might be prevented—either of the veteran himself or another veteran listening to the story.

A Green Beret in Vietnam

Mika is 76 years old, and was the first Green Beret to participate in the oral history project. He and Hendrick are in the same Special Forces Association chapter in South Carolina, which is how Mika became involved.

“The nature of the things that we did and the way we reacted to them, we generally don’t talk about anything that we do,” Mika said.

He and Hendrick realized that while Green Berets may be reluctant to talk about their experiences, they might be more comfortable sharing their stories with other Special Forces veterans.

Mika was in the United States Army for 21 years, and was a 27-year-old Green Beret who was deployed in Vietnam from January 1969 until May 1970.

He and his unit worked with an ethnic group called the Montagnards, a name the French gave them, meaning mountain people.

The real name of the group is Degar, and there used to be about 21 different tribes that spanned Vietnam, Laos, and Cambodia. The Green Berets had been advising and training the group since 1961, and they would often send a medic to treat the villagers.

The North Vietnamese Army and the Viet Cong frequently pilfered food and resources from the Montagnards, and would conscript young men from the village.

If they demanded something from the village elder and he didn’t comply, they would kill him to intimidate the village.

The Green Berets fought alongside the Montagnards against the North Vietnamese Army and the Viet Cong. The mission was highly effective.

“We were able to raise about a 75,000 man army utilizing the Montagnards,” Mika said.

Hendrick hopes to expand the project nationwide, and wants to give more Green Berets the opportunity to share their stories. He also hopes families will be able to learn more about their fathers’ and grandfathers’ experiences in the Special Forces.

Hendrick said Mika was pleased to be able to participate in the project, and that Mika is making a great effort to raise funds for the initiative.

Hendrick and Mika also want to educate the public about these stories and ensure they’re not lost to history.

Today, the Green Berets operate combat missions in Syria, Afghanistan, Iraq, and Yemen. They also work in some 70 to 90 countries at the request of the Department of State, the president, or an intelligence agency, to advise and train allies.

“It’s service. These guys are dedicated to what they do. They went into the military, they’re professional soldiers, and so whatever the country says this is what you’ve got to do, they’re going to go and do it,” Mika said.