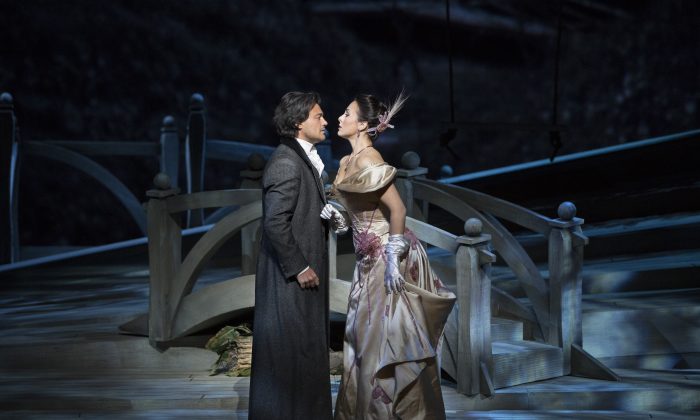 Tenor Vittorio Grigolo as Werther and mezzo-soprano Veronica Simeoni as Charlotte in Jules Massenet’s “Werther,” about a poet whom we would likely now call manic-depressive. (Marty Sohl/Metropolitan Opera)
Arts & Culture

NEW YORK—The success of any production of Jules Massenet’s “Werther,” the opera based on Goethe’s novel “The Sorrows of Young Werther” depends to a great extent on the tenor playing the manic-depressive title character. The Metropolitan Opera has brought back the production directed by Richard Eyre, starring Vittorio Grigolo, and the tenor has the looks, acting chops and, most important, vocal ability required for the role.

Eyre makes some changes to the opera that do not detract from the impact of the work. First, he changes the time period from the late 18th to the late 19th century, basically moving it into the period when Massenet wrote the opera.

Second, the director adds action during the playing of the overture: a mother dies and her family mourns her, after which winter turns into spring. The latter effect is achieved through Wendall K. Harrington’s imaginative video projections, which are especially effective in the first act. The sets and costumes are by Rob Howell.

In Act 1, it is revealed that the woman who died was the Bailiff’s wife and his eldest daughter, Charlotte, is taking care of the other children. Although it is early July, the family is rehearsing a Christmas carol.

A couple of the Bailiff’s friends arrive and they discuss Werther, a young poet who is going to accompany Charlotte to a ball later that day. The title character arrives and extolls the beauty of nature. He then meets his date and she leaves the children in the care of her 15-year-old sister Sophie. After Charlotte and Werther depart for the ball, Charlotte’s fiancé Albert arrives.

By the time the ball is over, the impressionable poet is smitten, and Charlotte seems to feel the same way. However, when they are about to kiss, the Bailiff yells out that Albert is there. The young woman admits that she had promised her dying mother that she would marry Albert.

When the second act begins, Charlotte and Albert have been married for three months. Werther and Albert maintain a cordial relationship. Nevertheless, the poet keeps pursuing Charlotte and brushes off Sophie when she asks him to dance with her.  When he confronts Charlotte, she urges him to leave town until Christmas.

The third act takes place on Christmas Eve.  Charlotte is re-reading Werther’s letters to her and realizes that she reciprocates his feelings. He appears and they have a turbulent scene together, at the culmination of which he kisses her. She pulls away and again orders him to leave.

Albert shows up and figures out what has been going on. A servant brings a note from Werther asking to borrow Albert’s pistols to take with him on a journey. Albert orders his wife to comply with the poet’s request, a sign that the husband is not as sympathetic as he seemed earlier.

Werther, distraught in his room, shoots himself in the chest– realistically portrayed.

In the last act, Charlotte arrives to discover the poet is dying. She admits her love for him, and he dies in her arms as children are eerily singing Christmas carols outside.

Vittorio Grigolo looks the part of a young romantic poet and sings with real passion. He is the most animated of actors, perhaps sometimes excessively so. In any event, he delivers the goods vocally.  The highlight of the evening was his rendition of the famous aria, “Pourquoi me reveiller.”

As Charlotte, mezzo-soprano Veronica Simeoni is making an impressive Met debut in her one performance. (The others all feature Isabel Leonard, a house favorite.)  She is affecting in the part and gives a tour de force performance of the Letter Scene (like Tatiana’s similar scene in Tchaikovsky’s “Eugene Onegin” except that Sophie is reading passionate letters to her rather than writing one to the man she loves).

Soprano Anna Christy is so charming as Charlotte’s sister Sophie that one wonders why the poet fails to respond to her apparent interest. Bass David Bizic is a convincing, vocally suave Albert. The excellent Met orchestra is led by Edward Gardner.