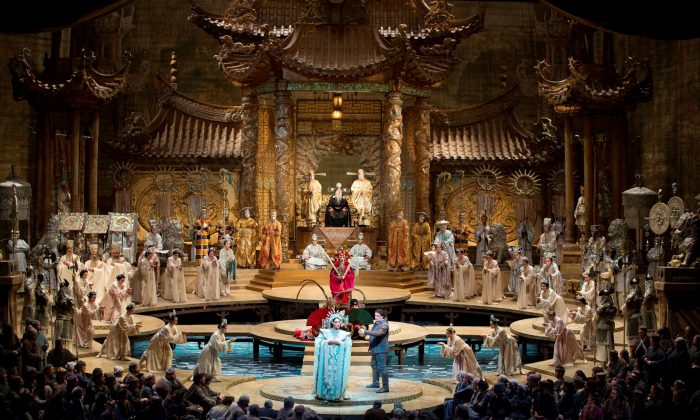 NEW YORK—What is the most spectacular set at The Metropolitan Opera this season? As in many prior years, it is Franco Zeffirelli’s Peking Imperial Palace in “Turandot,” which was first unveiled in 1987.

With The Met’s top-flight orchestra, chorus, and strong cast, the music casts its own spell.

Although “Turandot” takes place in ancient China, the work is based on a 1762 play by Italian writer Carlo Gozzi. Like Giuseppe Verdi, composer Giacomo Puccini’s (1858–1924) talent lasted until the end of his life. In fact, “Turandot” was unfinished at his death and completed by Franco Alfano. While the score reflects Puccini’s melodic gift, it also incorporates themes from traditional Chinese music.

Puccini was usually attracted to weepy stories, like “Madame Butterfly” or “La Bohème,” but “Turandot” is not especially heartwarming. The most affecting character is not the ruthless title figure whom the hero loves, but the devoted slave girl Liù, who only has eyes for him.

Icy Princess Turandot is eligible to be married, but the dating ritual is deadly; suitors have to answer three riddles or die. At the beginning, the Prince of Persia is beheaded for failing the test. Calàf is among the onlookers and strangely decides the princess is the woman for him.

Coincidentally, he recognizes in the crowd his long lost father, the exiled King Timur of Tartary. The old man is traveling with Liù, a slave girl, who readily admits that her feelings toward Calàf are the reason she continues to care for his father.

When Calàf announces his intention to win Turandot’s hand in marriage, his father and Liù tell him he’s nuts. Three comic characters—the ministers Ping, Pang, and Pong—also try to discourage him.

In the second act, Turandot appears and relates how her ancestor, Princess Lou-Ling, was kidnapped, raped, and murdered by an enemy army. As a result, Turandot is determined never to marry and to carry out revenge on any suitors. (Turandot could be thought of as a forerunner of the #MeToo movement.)

Calàf answers her three riddles, but he inexplicably gives her another chance to execute him. He declares that if she can learn his name by dawn, she can have him beheaded.

Turandot issues a proclamation that no one can sleep until the stranger’s identity is discovered. Soldiers capture Timur and Liù and bring them before the princess. She orders them to speak. The slave girl says that she alone knows the suitor’s name but refuses to answer even when she is tortured. She grabs a dagger and, declaring her love for the stranger, kills herself.

Suddenly and inexplicably, the princess softens her resolve, and Calàf then reveals his name. Liù is quickly forgotten, and the two lovers go off to live happily ever after.

There was a 45-minute intermission after Act I, but the audience didn’t complain. In fact, even though the music was playing, they burst into applause when they saw the Peking Imperial Palace.  This has happened at every performance of the opera that I have attended over the years at The Met.

The title role in the opera calls for an almost Wagnerian sound—it was probably the finest Italian role of Birgit Nilsson—and here was performed by soprano Martina Serafin, who has made a specialty of the part at the Met and around the world. Her big voice soared over the orchestra in her famous aria “In questa reggia.”

As Calàf, tenor Marcelo Alvarez made a strong impression, whether belting the showstopper “Nessun dorma” or in a tenderer vein, delivering his entreaty to Liù not to cry (“Non piangere, Liù”).

The most appealing character in the opera is the slave girl Liù, and soprano Guanqun Yu (the only Asian in the cast) contributes some of the most beautiful singing of the evening. Her aria in Act I, “Signore, ascolta,” was truly moving. (On April 5th, the last performance of “Turandot” this season, soprano Hei-Kyung Hong will appear as Liù, a role she has sung over 30 times with the company.)

The role of Timur often goes to singers who are past their prime, which fits the frail old man. However, here he was played by a younger artist, bass-baritone Alexander Tsymbalyuk, so the part was unusually well sung.

Conductor Marco Armiliato led a vibrant performance of the colorful score and the chorus was up to its usual high standards.