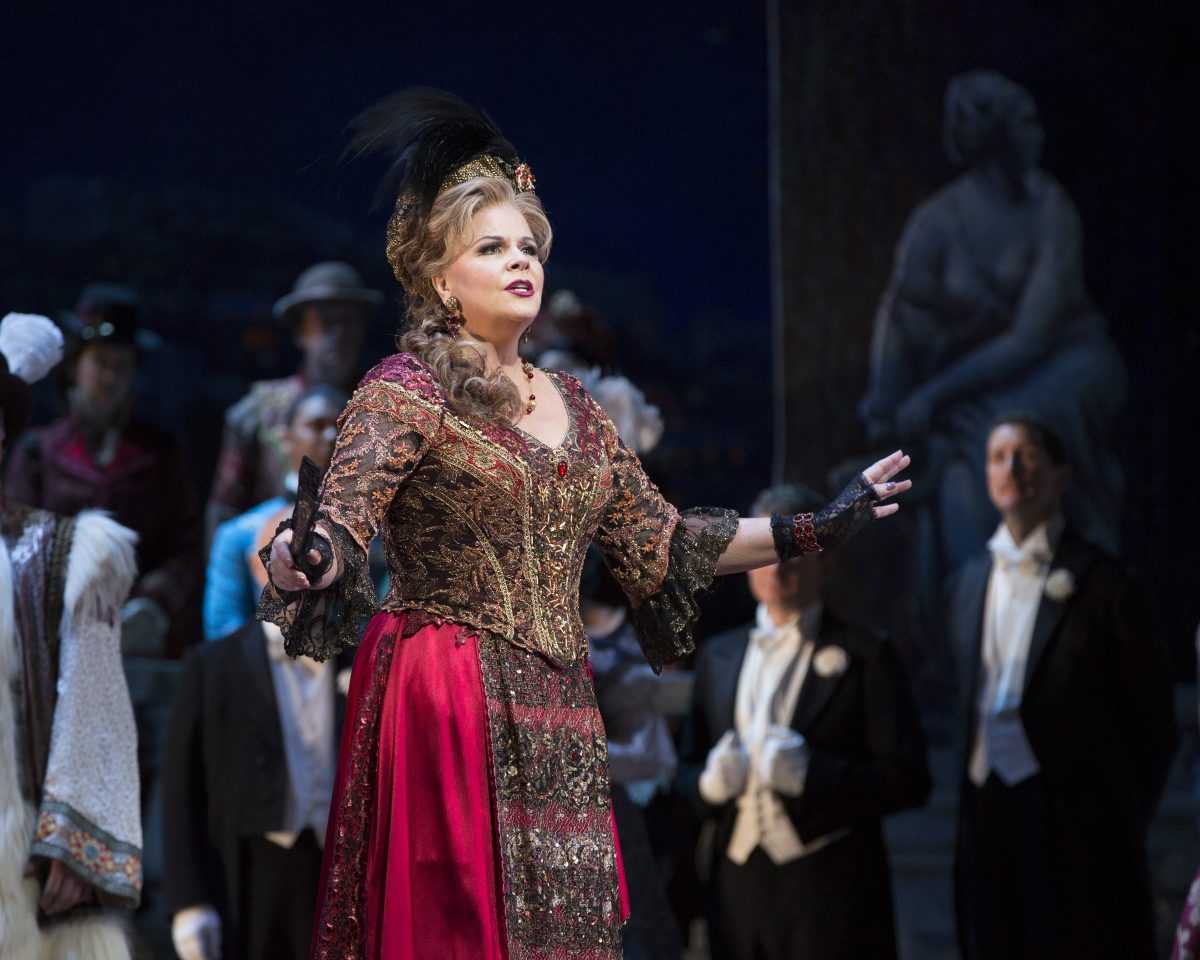 NEW YORK—Although operetta is usually thought of as a 19th-century form, Franz Lehár’s “The Merry Widow” (“Die Lustige Witwe”) premiered in 1905, and the composer continued to create popular works in this genre until the early 1930s.

“The Merry Widow” is back at the Metropolitan Opera, retaining its fizzy production by director-choreographer Susan Stroman (of “The Producers,” “Contact,” and “Crazy for You”) but with a new star in the title role: Susan Graham.

The production is a reminder that Lehár’s work was a forerunner of the Broadway musical. It also serves to confirm Graham’s status as a wonderful singer and charming actress.

The operetta takes place in Paris during 1900. Hanna Glawari (Susan Graham) is a beautiful widow from Pontevedro, a fictional Eastern European country on the verge of bankruptcy. Baron Mirko Zeta (Sir Thomas Allen), the ambassador from Pontevedro, is about to hold a ball at the embassy to help raise money for his homeland.

The baron hopes to convince the widow to marry another native of Pontevedro, the dashing Danilo Danilovitch (Paul Groves) so her fortune will stay in their country. In fact, Hanna and Danilo are former lovers, but they could not marry earlier because she was then considered lower class. Money changes everything.

Meanwhile, the baron’s young wife, Valencienne (soprano Andriana Chuchman), is carrying on a romance with the handsome Camille de Rosillon (tenor David Portillo). Camille writes “I love you” on her fan, which she immediately loses. The baron has no idea that his wife is carrying on with Camille and instead worries that the Frenchman will woo Hanna.

After the ball, most of the guests go to a party at Hanna’s villa. The baron learns that Camille has been seen romancing a mystery woman. He wants to find out her identity so he can marry her off to Camille and keep the Frenchman away from Hanna.

Valencienne retrieves the fan and writes “I am a respectable wife” on the back. Hanna, trying to protect her friend’s marriage, switches places with Valencienne and announces that she is engaged to Camille. Danilo is enraged and heads back to Maxim’s. The other partiers follow him there.

When Danilo confronts Hanna, she explains that she was just concealing her friend’s identity. He calms down, but not enough to declare his love. Danilo announces to the others the truth about Hanna and Camille, but won’t reveal the name of the mystery woman.

The baron’s assistant, Njegus, turns up with the fan. The baron recognizes it as his wife’s, declares himself divorced, and proposes to Hanna. However, she then reveals that under her husband’s will, she will forfeit her inheritance if she remarries.

The baron and the others suddenly lose interest in the widow, except for Danilo. Thinking Hanna is now poor gives him the impetus to propose marriage. She accepts without hesitation and then clarifies the terms of the will: The reason she will lose her late husband’s estate is that it will pass to her new husband.

To wrap things up, Valencienne points out to the baron that her fan states on the back, in her own handwriting, “I am a respectable wife.” (The baron had previously noted that the statement of love on the front of the fan was penned by someone else.) Thus, the couples are reconciled, and the opera ends happily for everyone.

Mezzo-soprano Graham proved as impressive in comedy as she is in operatic tragedies, such as Hector Berlioz’s “Les Troyens.” She seemed to have real rapport with Groves as they sparred and flirted.

Vocal categories may have been changed from the earlier production, when Hanna was sung by a soprano and Danilo by a baritone, but it didn’t diminish the charm of the work. Graham’s singing of the nostalgic “Vilja Song” remains the musical highlight of the evening along with the famous waltz that she sings with Groves. The can-can number choreographed by Stroman is also a delight.

In his Met debut, conductor Ward Stare made the melodic score as delectable as a Viennese pastry. The cast remains the same in future performances except for Taylor Stayton, who will replace David Portillo as Camille.

Barry Bassis
Barry has been a music, theater, and travel writer for over a decade for various publications, including Epoch Times. He is a voting member of the Drama Desk and the Outer Critics Circle, two organizations of theater critics that give awards at the end of each season. He has also been a member of NATJA (North American Travel Journalists Association)
SHARE
Friends Read FreeCopyFacebookTweet
SHARE
Friends Read FreeCopyFacebookTweet
You May Also Like