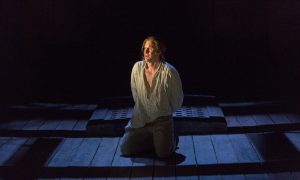 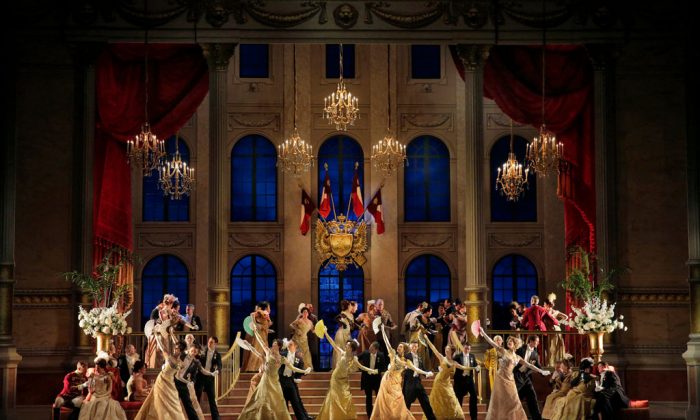 Opera Review: The Merry Widow Waltzes Into the Met

NEW YORK—Franz Lehár’s 1905 “The Merry Widow” (“Die Lustige Witwe”) is one of the most popular operettas, and the new production at the Metropolitan Opera shows why. Two Broadway veterans in their Met debuts are among the reasons for the success of the revival: director-choreographer Susan Stroman (of “The Producers,” “Contact,” and “Crazy for You”) and musical theater star Kelli O’Hara.

Other notable talents on hand were Renée Fleming in the title role, Sir Thomas Allen as Baron Mirko Zeta, and Nathan Gunn as Count Danilo. The production was unveiled on New Year’s Eve, but I caught a later performance.

Fleming is ideal as the merry widow; she looks lovely, and her singing of the “Vilja Song” is the musical highlight of the evening.

The operetta takes place in Paris during 1900. Hanna Glawari (Renée Fleming) is a beautiful widow from Pontevedro (a fictional Eastern European country on the verge of bankruptcy). Baron Mirko Zeta is the ambassador from Pontevedro. He is about to hold a ball at the embassy to help raise money for his homeland.

The Baron hopes to convince the widow to marry another native of Pontevedro, the dashing Danilo Danilovitch, so her fortune will stay in their country. In fact, Hanna and Danilo are former lovers but they could not marry earlier because she was then considered lower class. Money changes everything.

Meanwhile, the baron’s young wife, Valencienne (Kelli O’Hara), is carrying on a romance with the handsome Camille De Rosillon (Alek Shrader). Camille writes, “I love you” on her fan, which she immediately loses. The Baron has no idea that his wife is carrying on with Camille but instead worries that the Frenchman will woo Hanna.

After the ball, most of the guests go to a party at Hanna’s villa. The Baron learns that Camille has been seen romancing a “mystery woman.” He wants to find out her identity so he can marry her off to Camille and keep the Frenchman away from Hanna.

Valencienne retrieves the fan and writes, “I am a respectable wife” on the back. Hanna, trying to protect her friend’s marriage, switches places with Valencienne and announces that she is engaged to Camille. Danilo is enraged and heads back to Maxim’s. The other partyers follow him there.

When Danilo confronts Hanna, she explains that she was just concealing her friend’s identity. He calms down but not enough to declare his love. Danilo announces to the others the truth about Hanna and Camille, but won’t reveal the name of the mystery woman. The Baron’s assistant, Njegus, turns up with the fan. The Baron recognizes it as his wife’s and declares himself divorced and proposes to Hanna. However, she then reveals that under her husband’s will, she will forfeit her inheritance if she remarries.

The Baron and the others suddenly lose interest in the widow, except for Danilo. Thinking Hanna is now poor gives him the impetus to propose marriage. She accepts without hesitation and then clarifies the terms of the will: The reason she will lose her late husband’s estate is that it will pass to her new husband.

To wrap things up, Valencienne points out to the Baron that her fan states on the back in her own handwriting “I am a respectable wife.” (The Baron had previously noted that the statement of love on the front of the fan was penned by someone else.) Thus, the couples are reconciled, and the opera ends happily for everyone.

Kelli O’Hara’s singing is up to the Met’s high standards.

O’Hara has operatic training and, while I expect her to remain a musical theater rather than an opera star, her singing is up to the Met’s high standards. Even in the large house, her charm comes through. Moreover, her articulation of the words is even better than Fleming’s.

As the Baron, Sir Thomas Allen (now 70 years old) is still in fine voice and acts with gusto. Alek Shrader seemed a bit uncomfortable vocally as Camille. Carson Elrod (looking a bit like Martin Short) is funny in the non-singing part of Danilo’s assistant, Njegus.

“The Merry Widow” is being performed in a new English translation by Jeremy Sams. While I prefer opera in the original language, operetta is different since it falls somewhere between opera and Broadway with quite a bit of dialogue. The problem is that sometimes, especially in a hall as large as the Met, the words are hard to understand.

Among the pleasures of the production are the dances choreographed by Stroman, especially the can-can. The Met orchestra played with finesse, under the baton of Sir Andrew Davis.

Incidentally, O’Hara will next star in “The King and I,” and Fleming will make her Broadway debut in a non-singing role (albeit as an opera diva) in the comedy “Living on Love.”