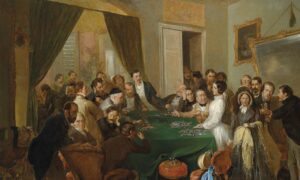 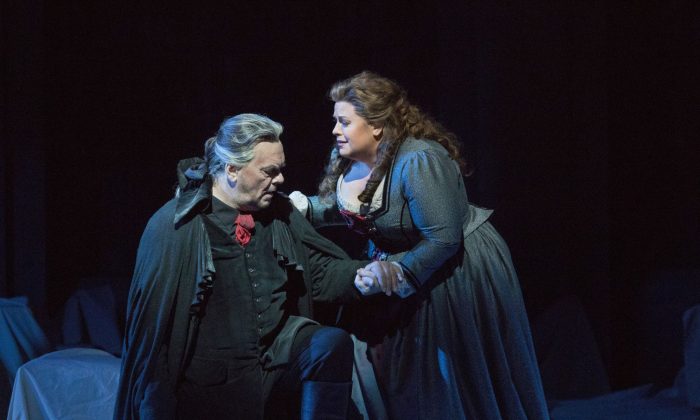 Michael Volle at the Metropolitan Opera
By Barry Bassis

NEW YORK—Richard Wagner’s “Der Fliegende Holländer” (“The Flying Dutchman”) is back at the Metropolitan Opera with a strong cast headed by Michael Volle in the title role. Yannick Nézet-Séguin, the music-director designate of the Met, conducted with style.

The opera takes place on the Norwegian coast. While Wagner did not specify the time period, the 1989 August Everding production sets the action in the mid-19th century, the time period when the opera was composed and first performed.

A ship helmed by a Norwegian sea captain named Daland was on its way to its home port when it was knocked off course. When the storm ends, the Flying Dutchman’s ship drops anchor next to Daland’s vessel. The Dutchman appears and reveals his predicament. For some unknown reason, he has been condemned to sail the seven seas until the end of time. Every seven years, he is permitted to land and seek a wife who can free him of his curse. (He apparently doesn’t realize that once wed, he may have the opposite problem, known as the “Seven Year Itch.”)

Conductor Nézet-Séguin again showed why he is considered such a valuable asset at the Met.

The Dutchman meets Daland and brags to the Norwegian about his immense wealth. He offers to pay generously for a night’s lodging. When he learns that the captain has a daughter, the Dutchman offers to pay a fortune for her hand in marriage. After seeing a chest of jewels that the Dutchman describes as a small sample of his on-board collection, the mercenary captain accepts.

Act 2 begins with women singing and spinning in Daland’s home on the coast. Daland’s daughter Senta doesn’t take part because she is fascinated by a painting of a pale man dressed in black. She then recounts the tale of the Dutchman’s curse. Though Senta has a suitor named Erik, a hunter, she shocks the women by confessing that she believes she is the Dutchman’s future wife and savior.

Erik becomes distraught when he overhears the conversation and he informs the women that he spotted Daland’s ship approaching. When he is alone with Senta, he admits he is impoverished, but offers her his unconditional love and blames her father for thinking of nothing but money. Erik warns her of his dream that she would be taken away by a stranger brought by Daland. Rather than being alarmed, Senta seems oblivious to Erik’s despair and relishes the thought of running off with the Dutchman. She is more sympathetic toward the man she never met than to her suitor.

When Daland finally appears with the Dutchman, Senta immediately recognizes him and is mesmerized. Her father complains that she hasn’t embraced him and figures out that he is the third wheel and discreetly leaves the room. Senta assures the Dutchman that she intends to bring him salvation and is aware of the sacrifices she must make to bring him peace. When Daland returns and learns that Senta agrees to marry the Dutchman, all three are happy.

Act 3 takes place on the beach overlooking the two ships. The Norwegians are celebrating and try to convince the Dutch crew to join them. The ghostly sailors strike terror in the hearts of the villagers by declaring that the devil has blessed their ship. Erik turns up, still frantically trying to convince Senta that he and not the Dutchman is the more suitable marriage partner.

The Dutchman sees the pair conversing but misconstrues their conversation. He thinks she has changed her mind about marrying him and says goodbye. Senta assures him that she knows of his curse and is not deterred but he boards his ship and starts to sail away. She calls out that she is faithful even after death and jumps off a cliff to prove the point. This act allows the Dutchman to achieve his salvation.

Baritone Michael Volle made his Met debut as Mandryka in Richard Strauss’ “Arabella” in 2014. The same year, Opernwelt magazine named him singer of the year. His appearance as Hans Sachs in “Die Meistersinger von Nürnberg” at the Met confirmed his status as a major star. As the Dutchman, he delivers an authoritative performance, charismatic and rich-toned.

Rising star Amber Wagner, a soprano from California, unleashed a powerful voice as Senta. She is not yet in Volle’s class as an actress but she matched him note for note. Other talented Americans in the cast included the excellent tenor Ben Bliss as the Steersman, another talented tenor A.J. Glueckert as the jilted Erik and powerhouse mezzo-soprano Dolora Zajick as Senta’s nurse, Mary. German bass Franz-Josef Selig convincingly portrayed the unsympathetic Daland.

Conductor Nézet-Séguin again showed why he is considered such a valuable asset at the Met.