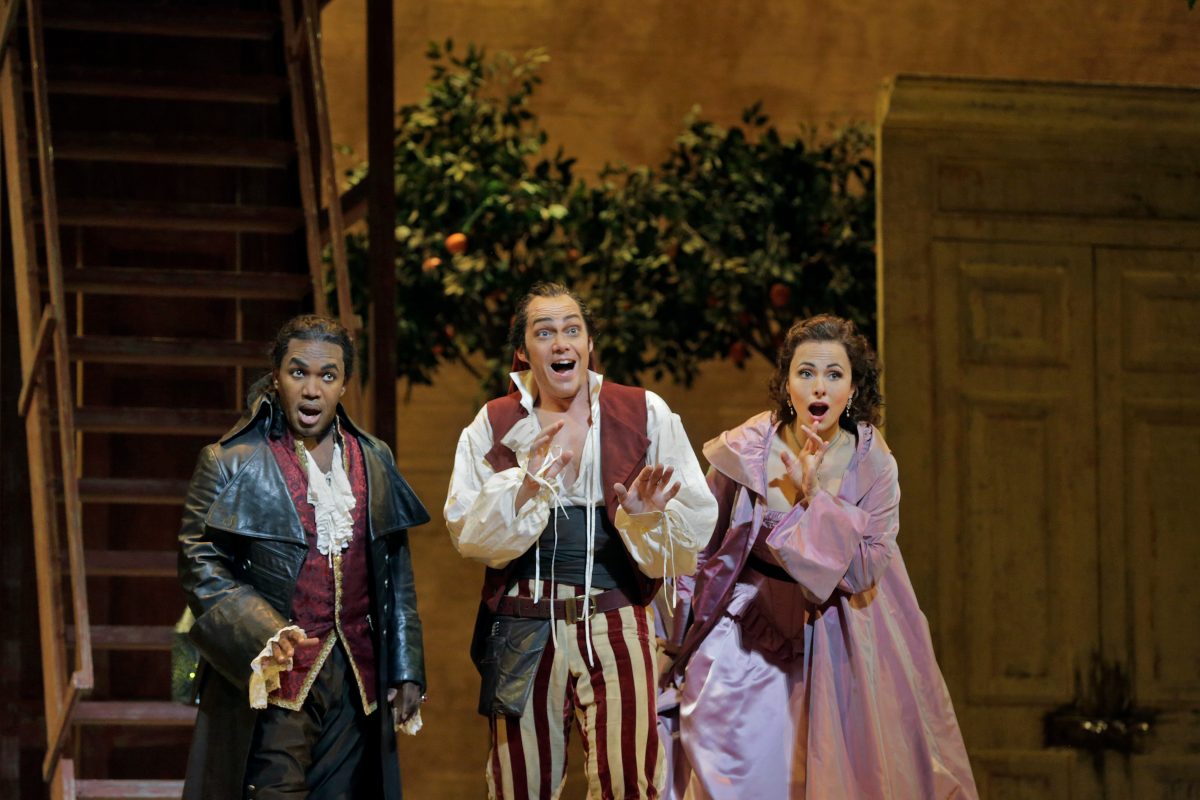 Opera Review: ‘The Barber of Seville’

A spirited production at the Met
BY Barry Bassis TIMEDecember 2, 2014 PRINT

NEW YORK—Giuseppe Verdi once called Gioachino Rossini’s 1816 “Il Barbiere di Siviglia” (“The Barber of Seville”) “the finest opera buffa in existence.” The audience at the current revival at the Metropolitan Opera would no doubt heartily agree. The opera was first performed in the Met’s very first season (1883–84) and has lost none of its luster.

The story, adapted from the French play by Beaumarchais, deals with a beautiful young woman, Rosina, who is under the control of her guardian, Dr. Bartolo. The pompous old man wants to marry his ward.

Meanwhile, she is being romanced by Count Almaviva, who appears in a series of disguises. Rosina thinks he is a poor student named Lindoro. He has already won her heart with his singing and good looks, when she spotted him from her balcony.

Figaro, the title character, assists the Count in his effort to win Rosina. Almaviva arrives at Bartolo’s house pretending to be an inebriated soldier with orders to be billeted there. Bartolo tries to claim he is exempt from the requirement that he house soldiers, but during the commotion that results when the civil guard shows up, Almaviva passes a note to Rosina.

In the second act, the Count pretends to be Don Alonso, a music teacher and student of Basilio. He claims that Basilio is sick and offers to give the young woman her music lesson. He uses the letter from Rosina to Lindoro to prove his bona fides to Bartolo. When the Count and Rosina get together, they express their mutual love.

Figaro arrives to shave Bartolo and manages to steal the key to Rosina’s balcony. Basilio appears in good health, but he is convinced to go along with the ruse that he has scarlet fever when he is bribed by the young lovers.

Bartolo, fearing the romantic competition, plans to marry Rosina that evening. When he shows his ward her letter to Lindoro, she feels that the young man has betrayed her. She then admits that she had arranged to elope with the student. When Bartolo leaves to obtain help from a group of soldiers, Almaviva mollifies Rosina by revealing his true identity. By the time that Bartolo returns, Rosina and the Count are married, and the old man admits defeat.

Director Bartlett Sher has come up with some delicious comic bits, beginning with some stage business during the overture by Dr. Bartolo and his dour servant Ambrogio. Figaro arrives on a wagon pulled by a bevy of beauties. (While Figaro is the womanizer and the Count loyal to one woman in “The Barber of Seville,” in the follow-up work, “The Marriage of Figaro,” the situation is reversed. Figaro is in love with his fiancée Susanna, while Almaviva, now married to Rosina, is an inveterate skirt-chaser.)

Native New Yorker mezzo-soprano Isabel Leonard adds another flawlessly sung, delightfully acted role to her repertoire. Her “Una voce poca fa” was beautifully sung. Like her Cherubino in Mozart’s “Marriage of Figaro” earlier in the season, she proves that she has developed into one of the opera world’s leading comediennes. That she could also be a moving Blanche last year in the tragic “Dialogue of the Carmelites” shows her remarkable range.

Lawrence Brownlee, another American star, is one of the leading bel canto tenors. His golden voice, always used tastefully, brought the house down as Count Almaviva in Act 1’s “Ecco ridente” and again at the end of the opera. He also acts with comic flair.

Bass Maurizio Muraro as Dr. Bartolo looked and sounded just right, while Paata Burchuladze as Basilio was more secure as an actor than as a singer. He had some difficulty with the “La Calunnia” (“Slander”) aria.

“Il Barbiere di Siviglia” will be repeated with the same cast on Dec. 3 and 6 at the Metropolitan Opera, Lincoln Center. For more information, see metopera.org.