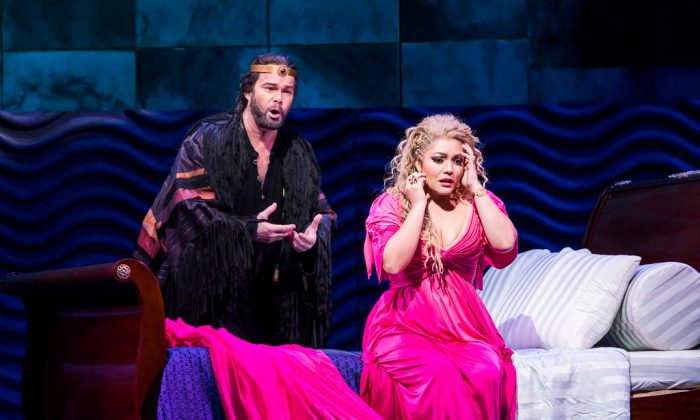 Ailyn Pérez is Thaïs at the Met
By Barry Bassis

NEW YORK—American soprano Ailyn Pérez has made the transition from promising young artist and award winner—including the 2012 Richard Tucker Award—to established star. This season, she has the leads in three operas at the Metropolitan Opera. The first is the title role in Jules Massenet’s 1894 “Thaïs,” and she demonstrated why she has achieved that artistic stature.

“Thaïs” has a ludicrous storyline even though it is based on a respectable literary source: a novel by Nobel Prize winner Anatole France (1844-1924).

Athanaël visits Nicias, his wealthy friend in Alexandria. Nicias is amused by the monk’s plan since he is Thaïs’s current lover, but only for one more night. Despite his selling off valuable properties, he could not afford her any longer.

That evening at Nicias’s house, Athanaël confronts Thaïs and she publicly rejects his plea for her to give up her way of life. She bluntly tells him his religious practices are unnatural.

In the second act, the holy man turns up unannounced in the courtesan’s bedroom. Now, she feels doubts about her career choice, and Athanaël’s preaching suddenly carries more weight with her.

She agrees to follow the holy man into the desert and even yields to his demand to burn down her house. They escape from an angry crowd that Nicias had enticed with the hope that they would convince the local courtesan to stay in Alexandria.

In the third act, the pair are struggling to cross the desert to reach the convent where Athanaël plans to deliver the convert. He feels a twinge of guilt when he sees her bleeding feet, but she assures him she welcomes her salvation. Once they reach the convent, Athanaël realizes that, thanks to his efforts, he probably won’t see her again.

Although Thaïs has been at the convent only a short time, the nuns are ready to declare her a saint and she dies with visions of angels. The holy man arrives too late.

Anatole France’s novel was intended as an attack on the excesses of Christian piety. The opera transforms the tale into one of romanticism and redemption.

The most famous melody in “Thais” is “Méditation,” an orchestral interlude with a violin solo, well played by David Chan with the orchestra expertly conducted throughout the evening by Emmanuel Villaume.

Thaïs has some technically difficult arias, such as “Dis-moi que je suis belle,” to which Pérez brought a lustrous tone, some impressive high notes and convincing acting. That she happens to be beautiful also helps when playing this part.

Gerald Finley was scheduled to play Athanaël but he bowed out because of illness. His replacement, bass-baritone Bradley Garvin filled in with distinction. The holy man actually has the largest role in the opera and has his own famous aria (“Voilà donc la terrible cité”) as well as the final duet with the courtesan “Baigne d’eau mes mains.” He has to portray both a holy man and a flesh and blood character who lusts after the heroine. Perhaps because he is tall, good looking and has a rich voice (and can be seen on YouTube singing hymns with his mother playing piano), he put me in mind of the late Jerome Hines (who had a long and distinguished career at the Met).

Tenor Jean-François Borrs as Nicias also impressed for both his acting and suave vocalizing.

In addition to “Thaïs,” Pérez will be appearing at the Met this season as Countess Almaviva in “Le Nozze di Figaro” and Juliette in “Roméo et Juliette.”