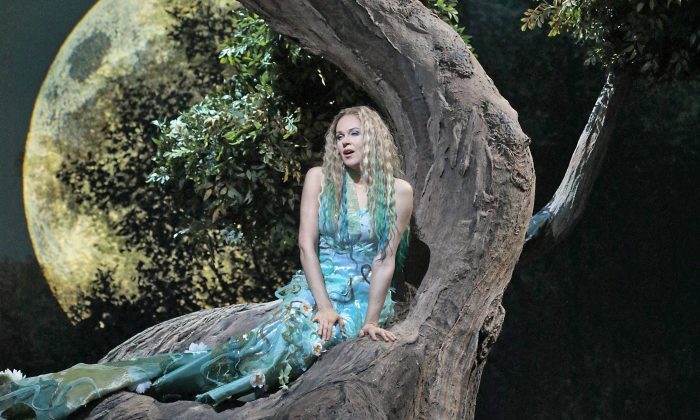 It took almost a century for the work, which premiered at the National Theater in Prague in 1901, to be performed at the Metropolitan Opera in 1993, but now it is back in a new production, directed by Mary Zimmerman and starring Latvian soprano Kristine Opolais.

The fairy-tale plot involves a water nymph, Rusalka, who sees a handsome prince swimming in the lake and immediately falls in love with him. Her father, the Water Sprite, warns her that humans are intrinsically evil. Though he is opposed to his daughter’s plan, he nevertheless refers her to the witch Jezibaba. Rusalka implores the Moon to communicate her love to the Prince.

The title character is one of the signature roles of Latvian soprano Kristine Opolais.

Jezibaba appears and cautions the water nymph that if the romance doesn’t work out, the Prince will die and Rusalka will face damnation. Also, the price of becoming human is the loss of her voice. Undeterred, Rusalka drinks the potion.

When the Prince turns up with a hunting party, he is smitten with the lovely young woman despite (or perhaps because of) her failure to speak.

At the castle, preparations are being made for a wedding of the Prince and his mute fiancée. The Gamekeeper and the Kitchen Boy express their suspicions that something is wrong with the bride to be. Rusalka is like a fish out of water, unable to talk to anyone and a target of ridicule. The Foreign Princess, who has come for the wedding, pokes fun at the silent young woman and even the Prince has qualms about his love interest.

The Water Sprite pays a visit to his daughter at the castle, and he is the only one who can communicate with her. She fears that the Prince has lost interest in her and, in fact, the fickle royal has switched affections to the Foreign Princess. After the Prince rejects the water nymph, she leaves with her father.

Back at the lake, Rusalka tells the unsympathetic Jezibaba of her rocky romance. The witch suggests a solution. She hands the nymph a knife and recommends that Rusalka stab the Prince to death. This strikes the lovelorn heroine as too extreme, and she throws away the weapon. When she returns to the water, even her sisters reject her.

Meanwhile, the Gamekeeper and the Kitchen Boy seek help from Jezibaba, claiming that their Prince has been bewitched by the mysterious girl from the forest. The Water Sprite hears their comments and comes to his daughter’s defense, asserting that the Prince is the deceitful one.

In the last scene, the distraught Prince turns up, desperate to make amends with Rusalka. She rebukes him for his infidelity and offers to give him the kiss of death. He immediately accepts the offer and expires after the final kiss.

Rusalka prays for his soul and disappears, to suffer eternal damnation. Obviously, this version of “The Little Mermaid” story is darker than what Hans Christian Andersen had in mind.

The title character is one of Opolais’s signature roles. She sang the most famous aria in the opera, “Song to the Moon,” at the 2016 Richard Tucker Gala, and brought the house down again when she performed it here.

Opolais, looking like Disney’s Ariel, is so lovely and such a consummate actress that she held the stage even in the second act when she was silent (except when she sang to her father).

As the prince, tenor Brandon Jovanovich made a strong impression. Rising star mezzo-soprano Jamie Barton was terrific as the witch. The soprano Katarina Dalayman was bright-toned and fiery as the Foreign Princess luring the Prince away from Rusalka. The bass Eric Owens had a strong presence as Rusalka’s father, the Water Sprite. Daniela Mack, a mezzo-soprano, gave a lively performance as the Kitchen Boy and baritone Alan Opie was effective as the Gamekeeper.

Zimmerman’s production, a collaboration with set designer Daniel Ostling, costume designer Mara Blumenfeld, and lighting designer T. J. Gerckens, is a pleasure to behold in every scene, whether set in the forest or the castle.