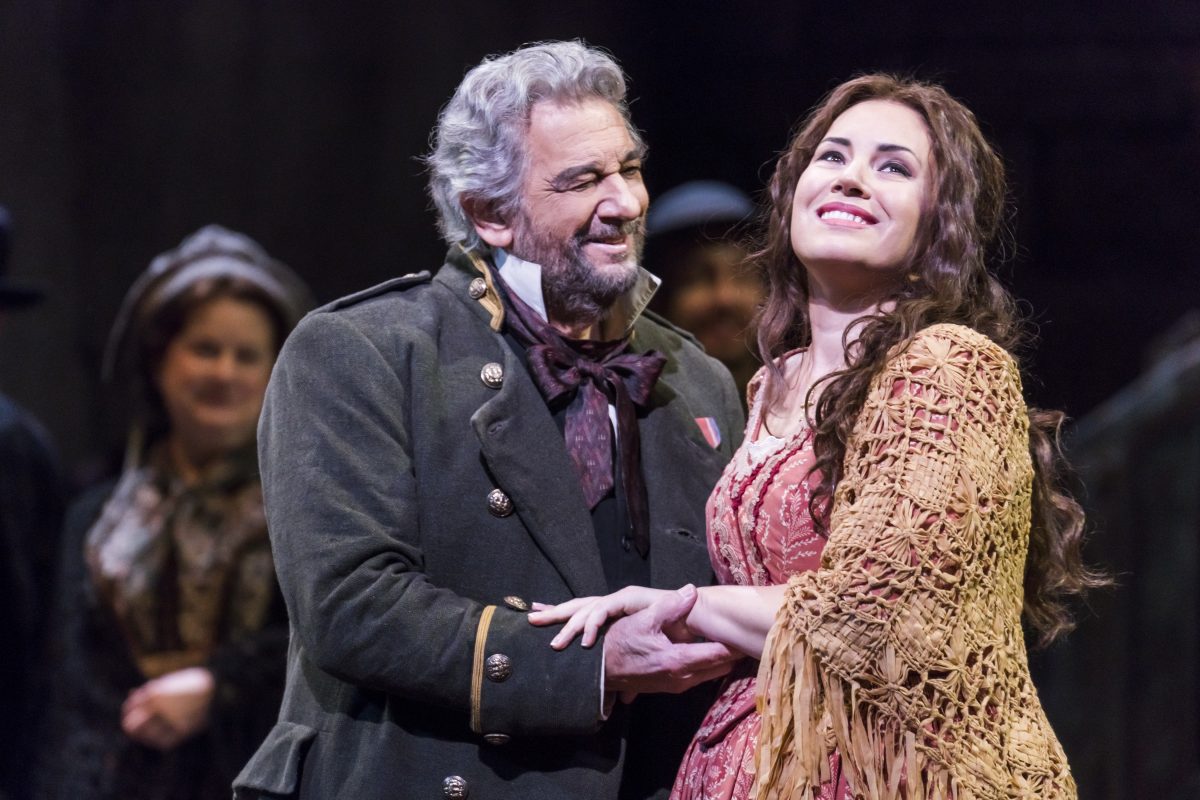 Plácido Domingo as Miller and Sonya Yoncheva in the title role of Verdi's "Luisa Miller," a story focusing on two fathers and their children. (Chris Lee / The Metropolitan Opera)
Performing Arts

Love and death at the Met in rarely performed Verdi gem
BY Barry Bassis TIMEMarch 31, 2018 PRINT

NEW YORK—Giuseppe Verdi’s “Luisa Miller” is being revived with a starry cast, with Plácido Domingo as Miller, Sonya Yoncheva as the title character, and Piotr Beczala as her lover Rodolfo.

The opera, which premiered in 1849, is adapted from Friedrich von Schiller’s play “Kabale und Liebe” (“Intrigue and Love”). The composer and his librettist Salvadore Cammarano dropped much of the intrigue and concentrated on the story of doomed love.

Although the opera, Verdi’s 15th, is engrossing from start to finish, with solo arias, duets including wrenching ones between a father and daughter, trios, and quartets, it is not performed very often. This production by Elijah Moshinsky has not been presented at the Met since 2006.

The opera takes place in the Tyrolean Alps. Luisa is being romanced by a young man she thinks is a commoner. (This is a common device in operas, such as Verdi’s “Rigoletto” and Gioachino Rossini’s “Barber of Seville.” As in the TV series “The Americans,” it seems strange that no one around town sees through the disguise.)

The young man is actually Rodolfo, the son of the local count named Walter. Luisa’s father, Miller, has doubts about the suitor. His suspicions are confirmed when the villainous Wurm, the count’s retainer who wants the girl for himself, blows the whistle on the masquerader.

Meanwhile, back at the castle, Count Walter has arranged for his son to marry a widowed duchess, Federica. Rodolfo has known her since childhood but has no romantic feelings for her. When the count informs his son about the plans he had made, Rodolfo rejects them and reveals his love for Luisa.

The old man is furious and has Luisa and Miller arrested. Rodolfo secures their release by threatening to reveal the family secret: Walter and Wurm murdered their royal cousin, a fact Rodolfo had learned from the dying man. (Walter later claims that he committed the crime so that his son would have a higher station in life.)

By the start of Act 2, Miller is back in prison for insulting the count and faces a death sentence. Wurm convinces Luisa that the only way to save her father is to write a letter saying that she acted as a gold digger to gain Rodolfo’s affections and that she really loves Wurm. As part of the charade, she goes to the castle to convince Federica of the veracity of the letter. Count Walter and Wurm show the document to Rodolfo and talk him into agreeing to marry the duchess to get even with Luisa.

When Act 3 begins, Luisa and Miller, now released from prison, plan to move away from the village. The despondent Rodolfo enters and drinks poison, after which he tricks the young woman into doing the same. After he informs her that she is dying, she reveals that the letter is phony and that he is her true love. Before expiring, Rodolfo manages to stab Wurm to death.

The phenomenal Plácido Domingo plays the old soldier Miller. Now 77, the former tenor who used to appear as Rodolfo is now working his way through Verdi’s baritone roles. His voice is still powerful and his tone firm, and he continues to command the stage even if he doesn’t sound like a true Verdi baritone.

After tackling Giacomo Puccini’s “Tosca” and “La Bohème,” Sonya Yoncheva is portraying her third lead role of the Met season as Luisa. A true singing actress, she proves that she is equally at home with Verdi. Her rendition of Luisa’s “Tu puniscimi, O Signore” was exquisite.

The biggest ovation of the evening went to tenor Piotr Beczala when he sang the most famous aria in the opera, “Quando le sere al placido.” He is one of the world’s finest tenors and deserves to be better known by the general public.

The two basses, Alexander Vinogradov and Dmitry Belosselskiy, were effective as the villains Count Walter and Wurm, respectively.

While the set by Santo Loquasto did not evoke applause, it actually depicts the scenes the composer and librettist had in mind (unlike the recent Las Vegas “Rigoletto” and the Coney Island “Così fan tutte”).

“Luisa Miller” may be second-rung Verdi but, as the cheering audience confirmed, it’s one that opera lovers should not miss.

A “Met: Live in HD” transmission is scheduled for April 14.