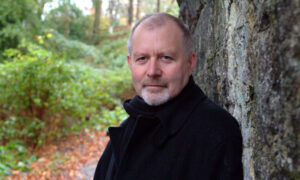 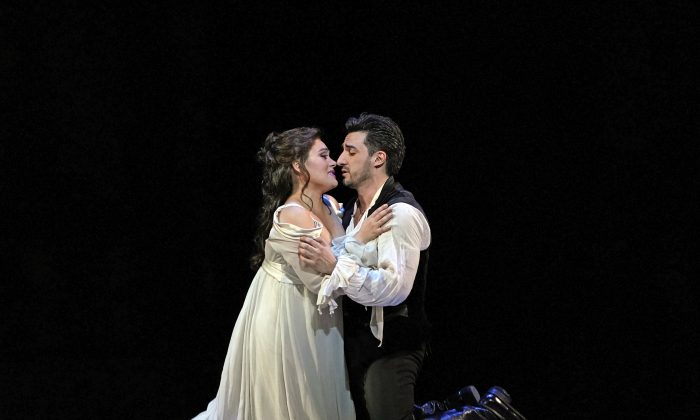 Ailyn Pérez as Juliette and Charles Castronovo as Roméo in Gounod's “Roméo et Juliette.” Andrea Shin stepped in for Castronovo on the night the performance was reviewed. (Ken Howard / The Metropolitan Opera)
Performing Arts

Originally, Bryan Hymel was scheduled to sing the male lead. However, he became ill and was to be replaced by Charles Castronovo. Then, he also cancelled for health reasons and, at the performance I attended, Korean tenor Andrea Shin stepped in, acquitting himself quite well. He deserves extra credit because this was his Met debut. At present, Castronovo is scheduled to return for the remaining performances.

Probably none of these tenors could have surpassed the conductor of the performance, Plácido Domingo, who excelled as Roméo in the 1970s when he was singing tenor roles. Domingo’s conducting was completely supportive of the singers.

This production, directed by Bartlett Sher (who is currently represented on Broadway by the delightful revival of “My Fair Lady”) updates the setting from the Renaissance to 18th-century Verona. Nevertheless, the plot stays fairly close to Shakespeare’s play, and many of the Bard’s lines appear in the text.

The opera starts with the chorus singing about the long-running feud between the Montagues and the Capulets.

At a masked ball in the Capulet palace, Juliette’s cousin Tybalt raves to Count Pâris about her beauty. Juliette’s proud father presents his daughter to the guests.

Roméo of the Montague family surreptitiously arrives with his friends Mercutio and Benvolio. He tells them of a dream he had, which Mercutio ascribes to fairy queen Mab. Roméo spots Juliette and falls in love at first sight. The young woman tells her nurse she has no intention of getting married but changes her mind as soon as Roméo speaks to her.

Roméo puts on a mask and makes a hasty retreat when the combative Tybalt comes over.

Act 2 is the balcony scene at the Capulet house, during which the young man expresses his love for Juliette. After a short interruption by the servants, the two decide to wed.

Act 3 takes place in Frère Laurent’s cell, where the young couple tells the priest that they want to marry. He agrees, thinking this may lead to peace between the families.

Outside, members of the Montagues and Capulets become embroiled in an argument. Roméo tries to make peace. However, when Tybalt kills Mercutio (who utters a curse on both their houses before expiring), Roméo fatally stabs the aggressor.

As punishment, Roméo is ordered to leave Verona permanently. He secretly marries Juliette but, after a night together, he departs from the city.

Juliette’s father tells her that she is to wed Paris later that day. Frère Laurent comes up with a plan to assist Juliette. He gives her a sleeping potion to create the illusion that she has died, so that she might later escape with Roméo.

This fools her family, and her body is placed in the family’s crypt.

When Roméo arrives and finds her lifeless body, he believes she has passed away. In despair, he takes poison. Juliette wakes to find her groom dying. She fatally stabs herself and the lovers sing a final duet, expressing their love and hope that God will forgive them for taking their own lives.

Despite the fact that Shin stepped in at the last minute—he had been the understudy for the part—his rendition of “Ah! lève-toi, soleil” (Ah, rise sun) in the balcony scene, was the high point of the performance. He has the dashing looks of a romantic hero and a fine voice that he uses with musicianship.

As Juliette, soprano Ailyn Pérez  once again enchants. Her “Je veux vivre” (I want to live) was beautifully sung and perfectly conveyed the intoxicating rapture of youth by a teenager at a ball in her parents’ house.

This has been a banner year for Perez, the third starring role at the Met this season. She impressed in all three. In “Thais,” she was a courtesan who finds religion, and in “The Marriage of Figaro,” she played a countess with a philandering husband. Here as a lovelorn and tragic teenager in the last, she, in addition to her singing, she is also believable.

The rest of the cast was also strong: baritone Joshua Hopkins as the headstrong Mercutio, tenor Bogdan Volkov as the combative Tybalt, bass Kwangchul Yuon as the sympathetic Frère Laurent, baritone Bradley Gavin as Count Paris, mezzo-soprano Karine Deshayes as Stéphano, tenor Tony Stevenson as Benvolio and bass Laurent Naouri as Juliette’s father (the head of the Capulet family).

The Met chorus was excellent, as usual.