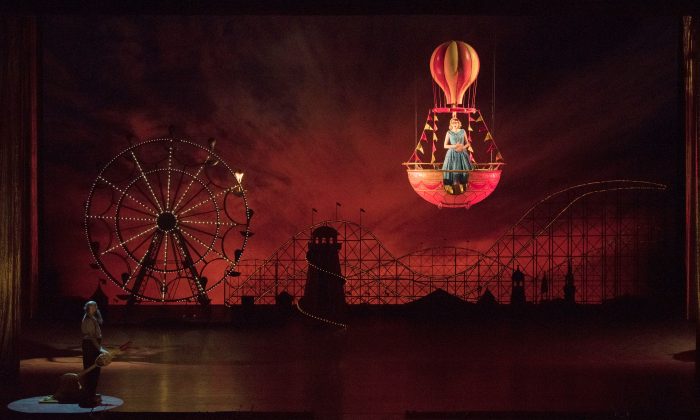 Coney Island at the Met
By Barry Bassis
Print

NEW YORK—Where can you see sword swallowers, contortionists, bearded ladies, and snake handlers? The surprising answer is on the stage of The Metropolitan Opera at the performances of Mozart’s “Così fan tutte.”

Although the opera was originally set in 18th-century Naples, for the new production at the Met (a product in partnership with the English National Opera), director Phelim McDermott has moved the action to Coney Island in the 1950s. Add to that a first-rate cast (including Broadway veteran and Tony Award-winner Kelli O’Hara), and the opera is a musical and visual feast.

“Così fan tutte” (which premiered in 1790) was the last collaboration between Mozart and Lorenzo Da Ponte, the librettist of “Don Giovanni” and “Le Nozze di Figaro.”

At the beginning of the play, two friends, Ferrando and Guglielmo, express their belief in the fidelity of their fiancées, Dorabella and Fiordiligi, who happen to be sisters. An elderly cynic named Don Alfonso bets the men that he can prove them wrong in 24 hours. (The title means “All women are like that,” and that is the premise of the opera).

The sisters live in the Skyline Motel, where Despina, the maid, complains about having to work so hard and is enlisted by Don Alfonso to help in his scheme to trick the sisters.

Ferrando and Guglielmo pretend to go off to war and then return in disguises. They put on fake mustaches (which is no more credible than Clark Kent wearing glasses, so no one will recognize him as Superman).

Each of the men makes passes at the other’s fiancée. The women initially resist but become more sympathetic to their new suitors when the men appear to take poison in despair over their rejection. Despina passes herself off as the doctor who heals them.

Dorabella gives Guglielmo a locket with Ferrando’s portrait. When Ferrando learns about this, he explodes in anger. Both sisters agree to marry their new suitors, and Despina (as justice of the peace) performs the ceremony. The men feign returning from the war and express their dissatisfaction at discovering the sisters’ infidelity. However, they relent when Dorabella and Fiordiligi beg their forgiveness.

The men reveal their scheme, and the original couples pair off. Don Alfonso basically tells them that they now have a more realistic view of human nature.

Though “Così fan tutte” is a comic opera, Mozart includes some music with deep feelings. One example is Fiordiligi’s aria “Per pietà, ben mio, perdona,” in which Majeski sings in a hot air balloon that rises and descends during her moving rendition. As her sister, Malfi delivers the upbeat “E amore un ladroncello.”

Bliss’s rendition of “Un’aura amorosa,” with his melting tone, confirms that he is one of the leading Mozart tenors. Maltman is an ideal Don Alfonso, scoring with both his singing and acting.

Kelli O’Hara gives a winning performance as Despina, finding all the humor in the role and holding her own vocally with seasoned opera singers.

The Coney Island setting, by McDermott with his excellent design team (Tom Pye designed the sets, Laura Hopkins the costumes, and Paule Constable the lighting) and the authentic sideshow performers (including a five-foot-long Burmese python), makes the performance truly special.

In fact, the action begins during the overture when the performers step out of a box in the center of the stage.