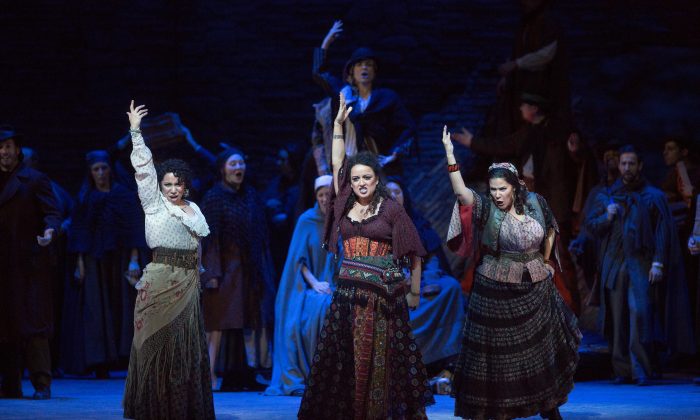 Clémentine Margaine's Carmen Has It All
By Barry Bassis
biggersmaller
Print

NEW YORK—Like businesses everywhere, the Metropolitan Opera has to contend with the flu season. The original plan had been to split the performances of “Carmen” between two stars in the title role: Sophie Koch and Clémentine Margaine. Koch had to cancel for health reasons, but fortunately Margaine was available to fill in for her, taking over the entire run.

The Don José, sung by Marcelo Alvarez, also canceled the first performance, but by the second, which I attended, he appeared, albeit with an opening announcement asking for the audience’s indulgence: he had not yet fully recovered.

Georges Bizet penned one memorable melody after another.

Despite these glitches, the Met delivered a memorable night at the opera.

Sir Richard Eyre’s production of Georges Bizet’s “Carmen” manages to be colorful while eschewing kitsch. Even before the music begins, the audience is placed on notice that they are about to witness a tragedy by the jagged red line, like a stab wound, across the curtain.

The main reason for the enduring popularity of the opera is that Bizet penned one memorable melody after another, and the Met’s cast and orchestra, conducted by Asher Fisch, deliver.

The opera takes place in Seville and begins with an innocent young woman, Micaëla, looking for the man she wants to marry, army corporal Don José. As he is on guard duty elsewhere, his fellow troopers make advances toward the young woman, who extricates herself and makes a getaway. (What is often treated as innocent horseplay by the soldiers in other productions is here presented as sexual harassment.)

When Don José returns from guard duty, he spots Carmen, a gypsy who works in a cigarette factory. She sings “Habanera” about the free nature of love and tosses a flower to the young soldier. The orchestra plays the haunting theme of “The Flower Song,” making it apparent that Don José is as lost as Fred MacMurray was in “Double Indemnity” when he first saw Barbara Stanwyck’s ankle bracelet.

Don José and Micaëla then meet and sing a tender duet in which he asks for news about his mother. Immediately afterward, Carmen gets into a fight with one of the other factory workers, and Don José is ordered to take her to prison. She convinces him to let her go and, as a result, he is the one who is locked up.

The second act is set in a tavern filled with a colorful crew of flamenco dancers and smugglers. The bullfighter Escamillo enters and sings the famous “Toreador Song.” He makes a pass at Carmen, but she rejects him.

Margaine is a spectacular Carmen.

Don José has just been released from prison, but Carmen makes fun of him for saying he must return to his barracks. He responds to her taunts by singing “The Flower Song” about how, during his confinement, he treasured the flower she had thrown to him.

After Don José gets into a fight with his commanding officer, who also has designs on Carmen, he is forced to join Carmen and her smuggler friends.

Act 3 takes place in the smugglers’ mountain hideaway. A fortuneteller reads the cards and warns Carmen that her death is approaching. Escamillo turns up and gets into a quarrel with Don José over their romantic rivalry. Then, Micaëla appears—this hideaway doesn’t seem very hard to find—and pleads with Don José to return to their village, where his mother is dying. He leaves, but warns Carmen that he will be back.

The last act begins with a crowd cheering for the bullfighters on their way to the arena. By this time, Carmen has linked up with Escamillo, and they enter together. He goes off to fight the bull, and Don José confronts Carmen, pleading with her to go off with him. She says she would rather die. He takes her at her word, fatally stabbing her.

The stage revolves to reveal Escamillo being hailed by the crowd—a stunning ending.

Margaine is a spectacular Carmen, singing with a rich voice that can be sultry or arrogant, and she even dances with style (as she demonstrated in the second act tavern scene). She looks the part and makes it clear why her performance has been rapturously received around the world.

The Spanish word “duende,” translated as “a quality of passion and inspiration,” seems to fit Margaine’s performance.

The hapless Don José is a good role for tenor Alvarez, who has made the transition from lyrical to dramatic roles. He is not an especially subtle actor, but he compensates with his vocal resources. The only flaw in his singing was at the end of “The Flower Song,” when he seemed to attempt a falsetto. Hopefully, this will be resolved when his health improves.

Some of the finest singing came from soprano Maria Agresta as Micaëla. Though the innocent young woman often comes across as bland compared to the fiery Carmen, Agresta projected a strong personality. Her Act 3 aria, “Je dis que rien ne m’épouvante,” was one of the highlights of the performance.

Bass Kyle Ketelsen was a dashing Escamillo and delivered the “Toreador Song” with gusto.

Christopher Wheeldon’s choreography is also praiseworthy and was danced with style by Maria Kowroski and Martin Harvey.

The opera will be performed through Feb. 18, albeit with some cast changes. Janai Brugger will appear as Micaëla on Feb. 3, and Michael Todd Simpson will take over as Escamillo on Feb. 15. Louis Langrée will conduct on Feb. 15 and Feb. 18.

Not even the flu season can diminish the power of Bizet’s masterpiece at the Met.