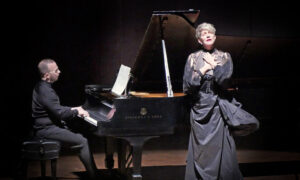 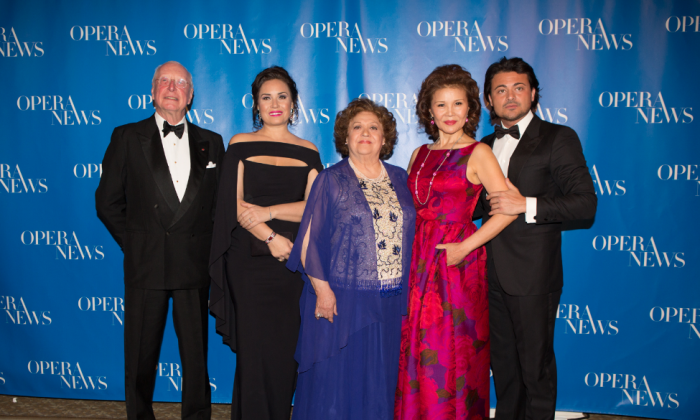 NEW YORK—Opera News, started by the Metropolitan Opera Guild in 1936, has the largest circulation of any classical music magazine in the United States. The black tie-award dinner for distinguished achievement in opera is an annual event looked forward to by music lovers.

The 13th annual award presentation was held at the Grand Ballroom of New York’s Plaza Hotel. Before the award presentation, an auction was held with attendees bidding on such unique items as a singalong of old pop songs in the winner’s own home by mezzo-soprano Stephanie Blythe accompanied by her ukulele, a week at a villa in Tuscany, and other unusual items. The bids were in the thousands of dollar range but the money went to a good cause: opera.

Quinn Kelsey, a native of Hawaii, is recognized as one of the world’s leading Verdi baritones. Asked in an exclusive interview with The Epoch Times as to why there are so few notable singers with this special type of voice, he pointed out that we recently lost one, referring to the great Dmitri Hvorostovsky.

Most baritones start their careers in the lyric range, he said, and eventually work their way into the lower range that Verdi favored.  But his own development was backward. He began with “Rigoletto” and thus gravitated to these roles right from the beginning.

Next season, he will appear in two of Verdi’s father roles at the Metropolitan Opera: Amonasro in “Aida” and Germont in “La Traviata.” He is currently starring as Enrico in Donizetti’s “Lucia Di Lammermoor,” the heroine’s brother. At the awards show, Kelsey gave the award to tenor Vittorio Grigòlo.

Getting to Know the Honorees

The ceremony began with greetings from Richard J. Miller, Jr., president of the Metropolitan Opera Guild, and F. Paul Driscoll, editor in chief of Opera News.

Bulgarian soprano Sonya Yoncheva has a gorgeous voice, which she uses with musicality and dramatic flair. A video of her singing the “Ave Maria” from Verdi’s “Otello” was immeasurably moving. It was appropriate that Domingo give her the award, since one of her earliest accolades was the top prize and the special CultureArte prize at Plácido Domingo’s Operalia competition in 2010. Also, Domino was onstage with her recently in “Luisa Miller” at the Met. Yoncheva also starred at the Met this season in “La Boheme” and “Tosca.”

Charismatic Vittorio Grigòlo started singing as a boy soprano in the Sistine Chapel Choir. A photograph showed him at 9 years of age with Luciano Pavarotti. He distinguishes himself not only with beautiful singing but also with his intense acting.

This season at the Met, he played the title character in “Tales of Hoffman,” even dancing during one aria, and sang of his despair as the doomed Cavaradossi in “Tosca.” He is ending the season with his Edgardo in “Lucia Di Lammermoor.” A video was projected of his ecstatic rendition of “Ah, lève-toi soleil” from Gounod’s “Roméo et Juliette.”

The only conductor to receive an Opera News award this year was William Christie. He was introduced by Joyce DiDonato, who cited him as key in her development. Yoncheva also cited him as a conductor from whom she learned much when she was starting out.

DiDonato mentioned Christie’s important work with the ensemble he founded, Les Arts Florissants, which revived interest in the baroque operas of Marc-Antoine Charpentier, Henry Purcell, George Frideric Handel and Jean-Philippe Rameau, among others.

Hei-Kyung Hong had her Met debut in 1984 as Servilia in “La Clemenza di Tito.” It was her Mimi in “La Boheme” that elevated her to star status. The South Korean soprano came to New York to study at Juilliard when she was 15 and, although she has performed at opera houses around the world, the Met has been her home base. Hong appeared this season as Liù in Puccini’s “Turandot.”

She spoke of her impoverished childhood in Korea and thanked her mother for raising her with musical training. She then paused and again thanked her mother for also raising Hong’s children. A dedicated wife, Hong took off three years to take care of and mourn her ailing husband, who ultimately died of cancer.

It was only fitting that Fiorenza Cossotto received her award from another famous mezzo soprano, Dolora Zajick. Cossotto’s debut was an important event. She was Sister Mathilde in the 1957 world premiere of Poulenc’s “Dialogues of the Carmelites.” She scored an early success as Leonora in Donizetti’s “La Favorita” at La Scala in 1962. The singer was known for her earth-shaking voice and dramatic fervor. A video of her Amneris from “Aida” conveyed the potency of her singing. The audience sang “Happy Birthday” to Cossotto, who just turned 83.

The evening (which also included a cocktail party and a lavish meal of burrata with fava beans, pan roasted filet of beef and Fifth Avenue cheesecake) ended with mezzo-soprano Stephanie Blythe accompanied by pianist Craig Terry. The opera star showed that she is also a Broadway belter, with two golden oldies: “Serenade in Blue” (a 1942 song composed by Harry Warren, with lyrics by Mack Gordon) and the 1931 “Wrap Your Troubles in Dreams” (by Harry Barris with lyrics by Ted Koehler and Billy Moll).

If you love opera, you should subscribe to Opera News. Even better, try to attend next year’s Opera News awards ceremony.