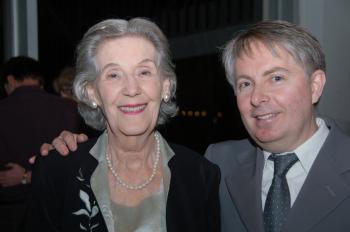 VANCOUVER, British Columbia—An actor and his grandmother were just two of the delighted audience members to take in Shen Yun Performing Arts’ opening show at the Queen Elizabeth Theatre on Friday evening.

Mr. Grove, who played with Will Ferrell in the popular Christmas movie Elf, was very impressed by the unique cultural show.

“It’s very theatrical, and it’s telling a grand, big story, and has lots of history as well, which is fascinating. It’s beautifully choreographed. Everything is told really easily.”

Mr. Grove, who has also acted in several other television shows and movies, said a number of different aspects of the show stood out for him.

“The drums are really powerful for sure, the colour, and the choreography again. The movement—there are just so many levels, and it’s so precise and synchronized. The story telling is really clear, so it’s impressive.”

“I think its fantastic, I just love it. The drummers and everything are wonderful. I’m revelling in it. It’s really fascinating, superb.”

She especially enjoyed the classical Chinese dance, the centrepiece of the show and an integral part of traditional Chinese culture.

Ms. Macloed said she got a strong feeling that she had seen the show before—even though she hadn’t.

“I’m sure I had a reincarnation in China—it just seems familiar to me. It just seems as though I’ve seen it before, but I never have.”
She praised the innovative backdrops,  which are custom-designed to coordinate with the costumes, choreography, lighting, and storyline for each dance.

After completeing its seven-show run in Vancouver, Shen Yun will go to Calgary, Edmonton, and Regina.