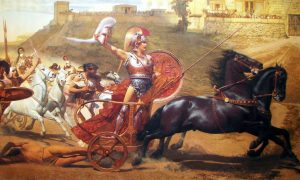 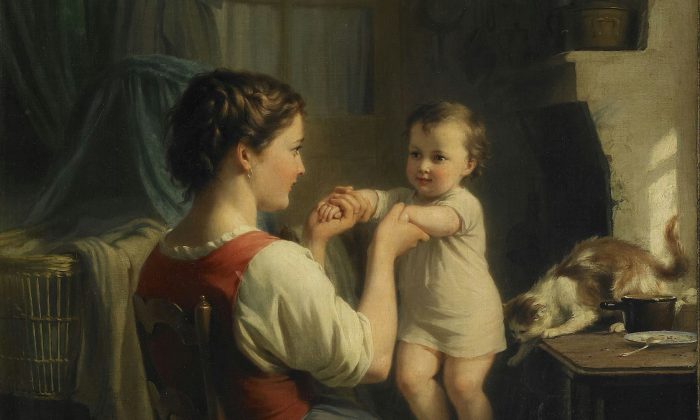 Reading a beautiful passage can sometimes tickle our hearts, delighting us much like a mother who takes pleasure in her child. A detail from “Mother and Child With Cat” by Fritz Zuber Buhler. (Public Domain)
Literature

Only the Heart Sees Rightly

Ruminations on reading
By Susannah Pearce

They say a picture is worth a thousand words. Sometimes this is true. A picture comes in handy when police are seeking a suspect in a crime. If all they posted on the “Most Wanted” board at the post office was a thousand words describing the ne’er-do-well, it would be significantly less likely to be noticed. The concepts of geometry would be really difficult to grasp without pictures. There is a reason Ikea assembly instructions are mainly laid out in pictures.

But, while it may be true in these cases that a picture is worth a great many words, it is not merely a matter of bookkeeping (1 picture = 1,000 words). There are times when only words will do. It is, in fact, mildly ironic that the phrase “a picture is worth a thousand words” gets across a point in seven succinct words that would be difficult to make with a picture.

Anyone who has looked through an old family photo album knows the frustration of turning over a photograph in the hope of finding the subjects of the snapshot identified, and finding it blank. How then can we make sense of the picture without the words?

A well-written passage in a good work of literature that describes scenery can convey something more about the place than can be captured in many photographs. I have never been to Norway, but reading Norwegian author Sigrid Undset’s novels, set in her native country, has made me long to go to this land where the breathtaking and dramatic landscape has shaped the history and cultural character of the people.

Willa Cather has done the same for Santa Fe, New Mexico, in her brilliant work “Death Comes for the Archbishop.” If I am ever fortunate enough to visit, I will feel a familiarity and connection with these places because the authors have invited me into their love for them.

Poems too can convey vivid images that a picture could not capture. Take, for instance, William Wordsworth’s poem “Daffodils.”

I wandered lonely as a cloud
That floats on high o’er vales and hills,
When all at once I saw a crowd,
A host, of golden daffodils;
Beside the lake, beneath the trees,
Fluttering and dancing in the breeze.

Continuous as the stars that shine
And twinkle on the milky way,
They stretched in never-ending line
Along the margin of a bay:
Ten thousand saw I at a glance,
Tossing their heads in sprightly dance

The waves beside them danced; but they
Out-did the sparkling waves in glee:
A poet could not but be gay,
In such a jocund company:
I gazed—and gazed—but little thought
What wealth the show to me had brought:

For oft, when on my couch I lie
In vacant or in pensive mood,
They flash upon that inward eye
Which is the bliss of solitude;
And then my heart with pleasure fills,
And dances with the daffodils.

In a mere 153 words, the poet conjures up in the reader’s mind more than simply an image of some daffodils—more even than the whole scene he saw. He seems to magically offer to the reader the happy feeling that the scene brought about in him. With words, he causes a spring breeze to cool the reader’s cheek. No wonder his name is Wordsworth!

Poetry consists of words, with a weird magic, much like the way an optical illusion boggles the visual senses, or the way a great work of art transcends a mere diagram of the same scene. What gives them this mysterious quality?

I think the answer is found in the most memorable passage of Antoine de Saint-Exupéry’s strange and beautiful novella, “The Little Prince”: “It is only with the heart that one can see rightly; what is essential is invisible to the eye.”

These wise words were said to the little prince by the fox that had asked the prince to tame him, and was now, as a result, sad to have to say goodbye. What is essential is the relationship—the ritual and care—that had transformed them both when the fox had been tamed by the boy.

It gives a deep quality to their vision, by which they see each other differently than they see all other boys and all other foxes. It is the mutual caretaking of what lies between the two that sparks to life something that did not previously exist in either.

Transformed by a Spark

This spark of life also transforms words from description into poetry. The scene inspires the poet, whose careful attention and work tames the scene, giving it a meaning it did not previously possess when it was not his. The poet becomes responsible for the scene, which captured his imagination and he tamed onto paper.

It can be the same with a painting. The exact rendering and balanced composition in a work of art is not the only thing that makes it an object of beauty. It is often wrongly said that beauty is in the eye of the beholder—as if beauty is merely an opinion.

The Delight in Beauty

An artist or poet invites the beholder of his work to share in this weird magic. It is felt by the reader or viewer as delight, a sort of tickle deep in the heart. That is what good poetry and great art do. They enfold the observer in the embrace of the original relationship and the beauty recognized.

That there is in us the capacity for delight is itself a bit of magic. Why should our hearts tickle at the sight of, the memory of, or another person’s account of beauty? What beautiful relationship are we being enfolded into? Where does this magic come from?

We do not create it ourselves. Think of a mother delighting in her baby. She smiles at him and her smile causes the delighted baby to smile, which increases her delight in him. All of creation resounds with the creation and cultivation of a divine poet. The Poet of perfection.

Words well composed are sometimes worth a great deal more than a picture. They allow us to participate in the poetry of creation.