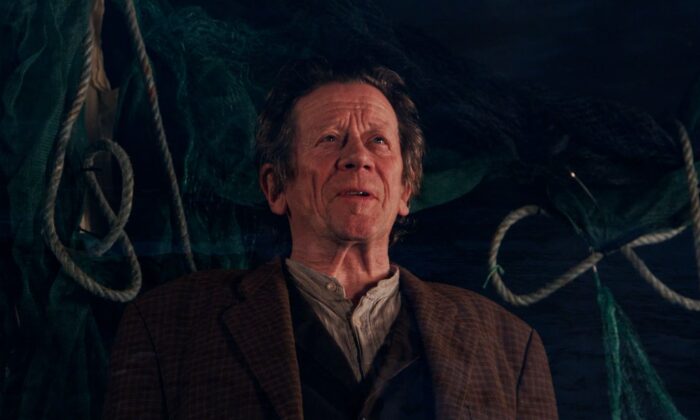 Brendan Conroy in the one-man “The Aran Islands: a Performance on Screen.” (Courtesy of Irish Repertory Theatre)
Performing Arts

Online-Theater Review: ‘The Aran Islands: A Performance on Screen’

A haunting and evocative experience awaits viewers of “The Aran Islands: A Performance on Screen,” made possible by New York’s Irish Repertory Theatre, which first presented a stage version of the work in association with Co-Motion Media in 2017.

The Aran Islands, off the coast of Galway, Ireland, had been remote and mysterious back in the late 1890s when the great Irish poet and playwright John Millington Synge decided to visit them, at the suggestion of his friend, that other great poet and playwright W.B. Yeats.

Two of J.M. Synge’s many plays, the noted “The Playboy of the Western World” and “Riders to the Sea,” were permeated with material from his travels to the islands. Remarkably, Synge was able to make a powerful mark on Irish and world literature before dying, sadly, at age 37.

Synge’s writings have here been translated into the current digital presentation. An other-world mood permeates the film. One can almost smell the churning sea, the fog, the gray mist, the never-ending stressful physical realities.

The remarkable actor Brendan Conroy inhabits Synge’s spirit. His performance is a revelation. I’ve never been particularly fond of one-person shows, but Conroy embodies a myriad of people, jumping out at the viewer with a variety of idiosyncrasies. One old man is so bent over with rheumatism that he appears more like a spider than a man.

The villagers greet the poet warmly, with a kind of old-fashioned courtesy. Men ply him with stories, one relating to a faithful wife who protects her husband from having five pounds of his flesh ripped from him in payment of a debt, for the debtor is forbidden to draw one drop of blood, a throwback to Shakespeare’s “The Merchant of Venice.”

Two very moving episodes of burials are described. In one an 80-year-old woman is buried, with attendant care and ceremony. The women of the village cover their heads with their red petticoats. But the overall feeling is not so tragic. She was old, after all.

However, when later, a young man has been drowned in the sea, while performing his duties as fisherman, his family moan and weep intensely, their suffering beyond measure.

Synge explains that this burial goes beyond the specifics of this one young man. It expands to the rage and grief the entire group feels, at the inevitable end that they will all meet: the men by drowning in the fierce sea, and the women never ceasing to mourn the fate that has been cruelly dealt to all of them.

The project was originally filmed in Dublin, as well as on the islands themselves, during the COVID-19 lockdown. Thus, the terrible pandemic has helped bring about an intensely moving artistic offering. The adaptation and direction by Joe O’Byrne are superb as are his camera work and editing.

Brendan Conroy, with his flexible face, hands and arms, and voice, conveys a cross-section of humanity—of folk both simple and complex—and never to be seen again, as times have changed.

I myself visited the Aran Islands, maybe 20 years ago, but the large island, Inishmore. It was a lovely spring weekend, the sky blue and bright. The only unusual event was that when I checked out of my charming bed-and-breakfast, the proprietor impetuously hugged me, a tear in her eyes. As if she knew she would never see me again, this stranger from so-called civilization.

‘The Aran Islands: A Performance on Screen’
For scheduling information, visit IrishRep.org
Viewing: Free, donations suggested
Streaming at: Broadway on Demand through March 28