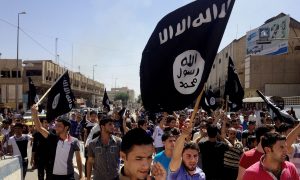 Despite Bombing, ISIS Is No Weaker Than a Year Ago
0
Share Now
TelegramFacebookTweetEmailTellMeWeReddit
Copy Link 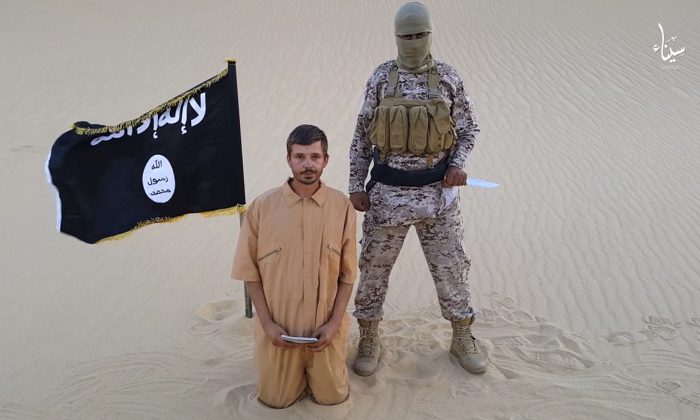 This image made from a militant video posted on a social media site on Wednesday, Aug. 5, 2015, which has been verified and is consistent with other AP reporting, purports to show a militant standing next to another man who identifies himself as 30-year-old Tomislav Salopek, kneeling down as he reads a message at an unknown location. (Militant video via AP)
Africa

CAIRO—An online image circulated Wednesday purported to show the beheading of a Croatian hostage held by the ISIS group’s Egyptian affiliate, the first such killing of a foreign captive in Egypt since the extremists set up a branch here.

The killing of the 30-year-old oil and gas sector surveyor likely will rattle companies with expatriate workers in Egypt and cast a cloud over President Abdel-Fattah el-Sissi’s attempts to boost international investment to revive the economy, battered by years of turmoil.

The still image, shared by Islamic State sympathizers on social media, showed the apparent body of Tomislav Salopek, a married, father of two, wearing a beige jumpsuit looking like the one he had worn in a previous video. A black flag used by the Islamic State group and a knife were planted in the sand next to him.

The photo carried a caption in Arabic that said Salopek was killed “for his country’s participation in the war against the Islamic State,” and after a deadline had passed for the Egyptian government to meet their demands.

The picture also contained an inset of two Egyptian newspaper reports, with one headline declaring Croatia’s support of Egypt in its war against terrorism and extremism and another saying Croatia reiterated its support for the Kurdistan region. Croatian troops also were part of the coalition forces in Iraq and they still serve in the NATO-led force in Afghanistan.

The Associated Press could not independently verify the image. However, it bore markings consistent the filmed hostage demand the group made last week.

In that video, the ISIS affiliate set an Aug. 7 deadline for Egyptian authorities to free “Muslim women,” a term referring to female Islamist prisoners detained in a sweeping government crackdown following the 2013 military ouster of the country’s Islamist president.

The extremists’ videotaped demand was entitled “A Message to the Egyptian Government,” and was shot in the style of previous ISIS propaganda videos.

Salopek, a surveyor working with France’s CGG Ardiseis, was abducted in western Cairo last month. The company has an office in the leafy Maadi suburb, where many expats and diplomats live.

The ISIS group holds about a third of Iraq and neighboring Syria in its self-declared “caliphate.” In Syria, Islamic State militants have killed foreign journalists and aid workers, starting with American journalist James Foley in August last year.

In Libya, an ISIS affiliate also has beheaded its captives. In February, they released a video showing them behead a group of Coptic Christians from Egypt in an online video. In April, another video showed them behead and shoot dead groups of Ethiopian Christians.

Egypt has seen an increase in violence since the ouster of Islamist President Mohammed Morsi, with attacks by suspected Islamic extremists in both the Sinai Peninsula and the mainland focusing primarily on security forces.

Foreign interests also have been targeted increasingly, including the Italian Consulate, which was hit with a car bomb last month. That came just days after another bomb killed Prosecutor General Hisham Barakat in an upscale Cairo neighborhood.

Despite Bombing, ISIS Is No Weaker Than a Year Ago

But this is the first time the local Islamic State affiliate purportedly has killed a captive foreigner in Egypt, a major escalation as the country tries to rebuild its crucial tourism industry after years of unrest following the 2011 revolt against autocrat Hosni Mubarak.

Last December, the affiliate claimed responsibility for the killing of an American oil worker with Texas-based energy company Apache Corp. Apache had said that previous August that one of its supervisors had been killed in an apparent carjacking in the Western Desert, part of Egypt’s mainland.