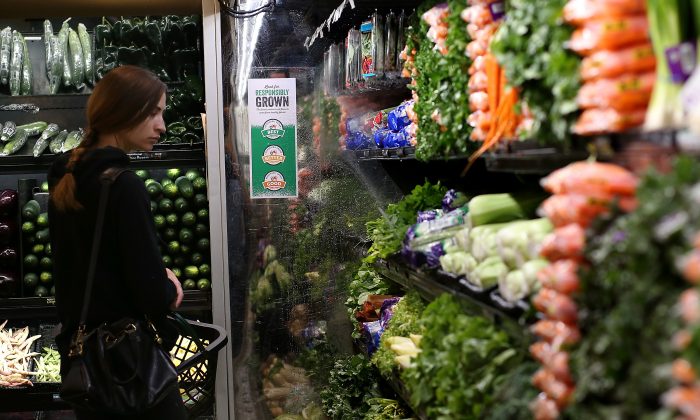 SAN FRANCISCO, CA - OCTOBER 15: A customer shops for produce at a Whole Foods market on October 15, 2014 in San Francisco, California. Upscale grocery chain Whole Foods Market launched a ratings program for fruits, vegetables and flowers that is intended to inform consumers about how the produce was grown, the environmental imapct and treatment of the workers wh produced it. The program is called "Responsibly Grown" and will label fruits and vegetables as good, better, or best, depending on growing conditions. (Photo by Justin Sullivan/Getty Images)
Food & Dining

One-Quarter of All Millennials Struggle to Pay for Groceries

Millennials are having a tough time paying for groceries, despite their financial security and optimism being at an all-time high, according to a new marketing survey from IRI, a market research firm.

IRI’s Shopper Sentiment Index is based on its quarterly MarketPulse survey. The index analyzes consumers’ shopping habits based on how much consumers look at prices when making purchases, their brand loyalty, and any changes in spending to maintain their desired lifestyle.

The higher the index number, the more optimistic the outlook: consumers are less price-driven, more loyal to their favorite brands, and not making changes to keep up their lifestyle.

Since the firm started compiling the index in 2011, the first quarter of 2015 was the best for millennials. They scored their highest, suggesting that the generation born after 1980 and before the 2000s is finally beginning to recover from the 2008 economic recession.

But when it comes to buying groceries, millennials are still struggling more than other age groups to afford them—25 percent are struggling, compared to 20 percent for the general population.

Here’s How to Trick Your Brain Into Buying Healthier Groceries

Due to the recession, millennials have had difficulty establishing their financial independence, with many of them still unemployed or underemployed, said Susan Viamari, editor of thought leadership at IRI.

“They’ve had less time to get to a firm footing before the economic downturn, plus higher school [tuition] bills,” Viamari said.

IRI’s data also shows that more and more millennials are turning to deals and coupons when shopping: 26 percent said they made more purchases on deals now than they did a year ago.

Increasingly, the millennial generation is turning to Internet coupon websites: 47 percent said they go on websites like SmartSource.com to get deals.

“Value is a huge target for millennials,” said Viamari, “the biggest bang for your buck.”

Recent studies indicate that millennials have different grocery-shopping habits than prior generations. A 2014 study by the Food Marketing Institute found that millennials tend to shop based on what they need for a particular recipe, instead of buying staples to stock their pantries.

And a 2012 market research report from global investment bank Jefferies and consulting firm AlixPartners revealed that millennials are shopping less at traditional grocery stores than other cohorts. They value freshness and convenience over store or brand loyalty, so they are no longer doing “one stop shopping” at the supermarket. Instead, they’re more likely to shop at different types of stores for different needs.