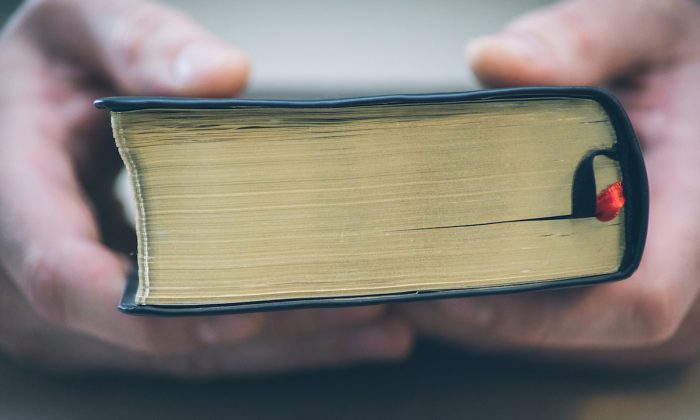 Much of Western literature, art, and American history is rooted in the Bible. (Shutterstock)
Literature

One Page at a Time: Bringing Back the Old Book

In the 1945 movie “A Tree Grows in Brooklyn,” based on Betty Smith’s novel about immigrants living in Brooklyn, New York, around the turn of the last century, we come across a scene of great import for us today. Francie and her brother Neeley are seated in their tenement apartment with their mother Katie and their grandmother. Every evening, the two children read aloud a page from the Bible and from Shakespeare while the two women sew.

On this particular evening, Neeley complains that no one in the room understands the lines from Shakespeare’s “Troilus and Cressida.” Katie tentatively agrees with him, but then says that the grandmother had long ago told her that these were the two greatest books. Maybe, Katie added, reading them “might even get you a job some day.”

Unfortunately, this reading, at least of the Bible, has stopped.

The Bible as a Foundation

To be ignorant of the Bible makes it impossible to connect deeply with the last 2,000 years of Western civilization. Painting, sculpture, poetry, music, and philosophy all are embroidered with uncountable references to the Old and New Testaments.

Literature in particular bows its head in homage to this monument of words. Even in the 20th century, writers as diverse as Ernest Hemingway, Marianne Moore, Thomas Wolfe, and Ray Bradbury allude again and again to passages from Scripture.

We might as easily argue that the King James Bible has heavily influenced the craft of writing. For over 400 years, English-speaking peoples read and heard these Scriptures. Looking again to our modern writers, we find, as one of many examples, Hemingway employing some of the rhythms of the King James Bible in his novels and short stories, cadences perhaps unconsciously inculcated in him by his religious mother.

For decades now, guided by the idea of “separation of church and state,” our public schools have either avoided or banned teaching the Bible as literature. By this banishment, as some writers and teachers have pointed out, our schools have removed a foundation stone of our liberal arts, our language, and our history.

Even the atheist and renowned deconstructionist Jacques Derrida taught Scripture to his university students. When asked why he spent so much time teaching the Bible, he replied with something echoing: If they don’t know the Bible, they won’t know much.

Precisely. Without some biblical knowledge, how could any student fully appreciate the mystery and miracle plays of the Middle Ages, the tales of Chaucer, the plays of Shakespeare, the poems of John Donne, and even such modernist works as James Joyce’s “Ulysses” or the poetry of T.S. Eliot?

Our history, too, is filled with references to the Bible. From the Mayflower Compact to the oratory of Martin Luther King Jr., our documents and public addresses bear a biblical stamp. The speeches of Abraham Lincoln in particular come to mind, with his outright embrace of numerous passages from Scripture, and the prose rhythms in his Gettysburg Address and Second Inaugural Speech displaying heavy influences from what he called the “Great Book.”

Years ago, we not only banned the Bible from literature classes, but we also erased the centrality of the Bible and religion from the founding of our country. In his online article “More Than a Culture War Rages in America,” Scott Powell of The American Spectator reports on this removal of religion from our public school history books:

In 1986, Dr. Paul Vitz, a professor of psychology at New York University, published the findings of a commission’s study in which he participated to examine the degree and nature of bias in 60 social studies and history textbooks used by 87 percent of public schools across the United States. Not only was there no God being thanked by the Pilgrims in the first Thanksgiving, but the study found that almost every other reference to the Christian influence of early America was systematically removed.

To make no reference to the religious beliefs of a people, to cut out the Bible and religion as major influences on our ancestors, is akin to writing a history of the Crusades without reference to the Cross.

Victor Hugo once wrote that “England has two books, the Bible and Shakespeare. England made Shakespeare, but the Bible made England.”

Yes, and England made America.

Please do not misunderstand me. I am not advocating instruction in the Bible for religious purposes, but for cultural literacy. We have a precedent to guide us in this endeavor. In ancient Greece and Rome, many philosophers, poets, and statesmen came to disbelieve in the Olympian deities, the pantheon of divine and semi-divine figures, yet they nonetheless recognized that Homer’s “Iliad” and “Odyssey,” and Virgil’s’ “Aeneid” were wellsprings of their culture, and they drank deeply from those waters.

The Bible occupies a similar place in our culture and tradition. Whether we are believers or not, the Old Book is a beam, perhaps the main beam, that undergirds our civilization; only now that beam is broken.

Proverbs 16:16 states, “How much better is it to get wisdom than gold! And to get understanding rather to be chosen than silver!”

Our society possesses plentiful gold and silver. What we need now is greater wisdom and understanding of our past and our traditions, and deeper connections to that past.

Repairing and restoring that beam will be difficult. No government program will assist in that restoration, and given the temper of our times, we can reasonably assume that few schools will at present undertake to teach the Bible as literature.

No—like so much that needs doing today, if we seek change, we must step up and take responsibility. Perhaps, like Neeley and Francie, we can begin mending that broken beam by reading one page at a time, one day at a time.