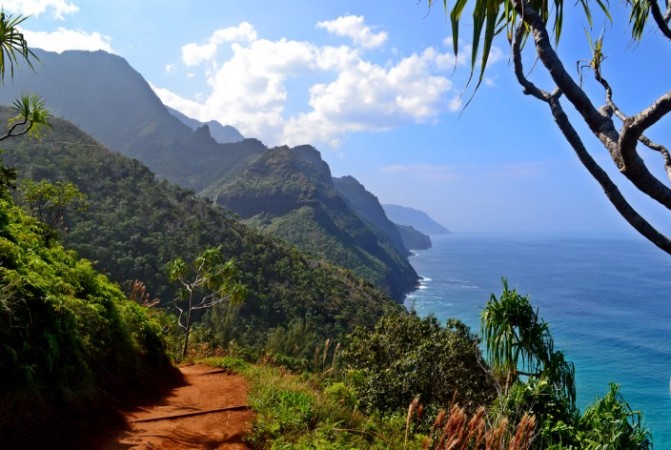 One of the Most Challenging Kauai’s Hike

The Kalalau trail is an at times very challenging eleven mile hiking trail which hugs the north shore Napali coast. It’s the only way to see this stunning stretch of Kauai without forking out big bucks for either the helicopter or boat tours which visit there. Those who choose to hike the entire eleven miles in will generally stay at least one night before heading back the same way, as the trail simply dead-ends and does not connect through to the west side of the island. I suppose some hardy and intrepid trekkers might try to hoof it all the way in and out in a day but you’d have to be a) insane, and b) completely nuts.

At the trailhead there are plenty of prominent signs warning hikers of the trail’s difficulty, the need to bring ample drinking water, to wear proper footgear and sun protection, the hazards of flash floods, giant man-eating insects, lions and tigers and bears, oh my! They basically try to convince you to turn around and go back to your car and forget the whole idea.

Undaunted by the dire warnings of our imminent demise should we choose to proceed, we slathered on sunscreen, donned our hiking shoes, toted our water bottles and hiked the first two miles of the trail to Hanakapiai Valley, along with a couple hundred other people who were: wearing flip-flops, carrying no water, ranging in age from infancy to about ninety, many of them obese and out of shape and looking like they needed a respirator after the first five hundred feet. I give them credit for trying. I just didn’t want to be the first guy to round some bend in the trail and find one of them beet-faced and convulsing on the ground.

The Napali coast is a series of ridges and cliffs and valleys which jut out until they plunge dramatically into the sea, so there is scarcely a level spot on the entire trail. You’re either going up or down and usually at a steep gradient. Much of the trail is composed of old volcanic rock which is either wet or covered in mud or both, meaning it’s slicker than snot. We took our time, stopping often for photos and simply to drink in the magnificent views and, frankly, because my energy level still wasn’t up to snuff.

For someone like me who’s spent his entire trail-hiking life in the Cascade and Olympic mountains of Washington, this was a fascinating and very different experience. Every turn of the trail brought a new vista of crystal clear, impossibly blue waters and soaring cliffs covered in jungle-like flora. I kept expecting to see Indiana Jones crash out of the undergrowth in his sweat-stained fedora with a moth-eaten map in one hand and his whip in the other and a few dozen natives in pursuit. Or maybe I just watch too many movies.

At the two mile mark the trail crosses a boulder strewn stream and gives you three options: a) take off your shoes and wade across barefoot; b) leave your shoes on and wade across and have wet footgear for the rest of the day; c) leave your shoes on and try boulder hopping across without slipping on the slick, wet stones and ending up with option b. We chose option c, and to my delight and surprise, both Irina and I negotiated the slippery stones without depositing our feet or fannies into said stream.

A short walk then brings you down to Hanakapiai beach. It’s not that big and there were perhaps twenty people or so meandering and lazing about, some eating lunches. No one swam as the rip currents are too strong there which disappointed us. It would have been a nice reward for our long sweaty trek to get there. We kicked off our shoes and waded in the waves, sat on the beach for a bit and headed back.

The return went quicker as we’d already stopped and taken plenty of pics on the way out. When we finally reached the trailhead, three teenagers were selling fresh coconuts out of the bed of their beater pickup truck. Five bucks a pop, which was probably overpriced, but what the heck, you gotta have a fresh coconut sometime while you’re in Hawaii, right? They hacked the coconuts open with their machetes, we drank the milk which wasn’t really milky at all but a semi-clear sweet liquid, just cool enough to be refreshing. Then we handed the coconut back to them and they chopped it in half and scooped around the meat so we could eat the rather bland flesh right out of the nut. Fun.