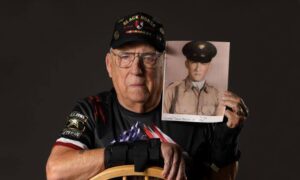 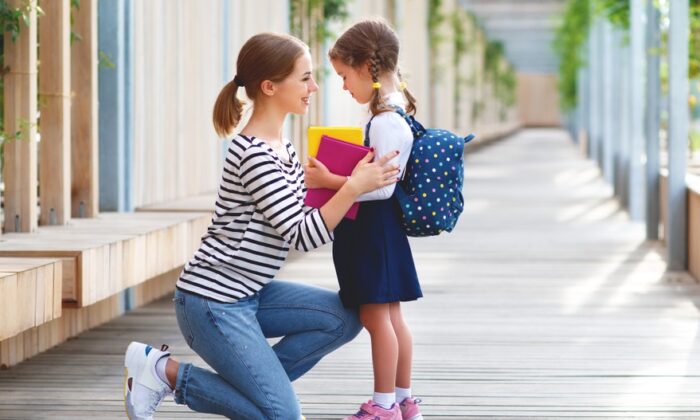 Some things never change about those early school days—memories are made and cherished by the young and old alike. (Evgeny Atamanenko/Shutterstock)
Family & Home

Once Upon a Time in a Classic Classroom

Memories from my childhood
By Anita L. Sherman

My 6-year-old granddaughter Maria is a first-grader this year. At this writing, and I pray it continues, her classes are in-person. Her kindergarten days were primarily spent in front of a computer due to the COVID-19 lockdowns.

She and I recently spent a delightful time shopping. It was a “grandmother date,” and together we chose a few outfits for school and, of course, a pair of black patent leather Mary Janes. Some items are just classic and have remained. She told me that her mother, my daughter-in-law Rose, had purchased her school supplies … crayons, pencils, highlighters.

My children are grown, so shopping (or ordering online) for packs of colored pencils isn’t on my agenda, but I found myself reflecting on my back-to-school days growing up in Portland, Oregon.

Yes, I know it’s a cliché, but things were simpler then. I attended St. Rose, a Catholic elementary school. And for me, the ritual of heading back to those small wooden desks with a hole in the upper right corner to hold a bottle of blue Sheaffer’s ink was sweet.

By third or fourth grade, we were expected to master the use of a fountain pen. I don’t even think ballpoints had been invented. If they had, we didn’t use them. For us, it was pencils, always to be kept razor sharp, and fountain pens.

Ink cartridges arrived on the scene later. We had to fine-tune the art of filling a fountain pen by gently mastering that tiny, slim silver lever on the side. A little and not enough ink always went in. Too much, and your fingers bore the permanent mark of your mistake.

And then, of course, there was Stephen. I’ll never forget the image of him occasionally drinking the ink because it gave him a blue smile. Stephen was quirky.

Rulers were your basic plastic variety with the tiny white numbers that eventually wore off, and crayons were gradually getting packaged in bigger and bigger sets—but for most of us stopped at 24.

Marbled composition books were very much in vogue as they are today, but mine were all black. There were no colors to choose from.

All my folders looked the same. I knew them only as PG folders and they were cream-colored, illustrated with sports figures in a cinnamon-colored ink. Lisa Frank (the designer of those cool psychedelic folders) hadn’t even been born yet, and Tweety Bird and company were just making their appearances on cereal boxes.

Zippered pouches for holding all the precious pencils and pens were around, but many of my classmates used old cigar boxes. These actually worked better because there was no zipper to break or plastic to get smeared with broken lead.

Backpacks were around, but they were used for hiking and canoeing trips. We had book bags, and if they had a strap, they were slung on one shoulder. They had lots of buckles and pockets, but the best part was the large plastic handle centered on top. Strutting down the street (most of us walked to school then), your book bag would gaily swing from side to side suspended by that handle that rarely, if ever, broke.

Taking your lunch to school was always risky in those days. Brown paper bags were acceptable, but having a metal lunch box was much better. However, the tricky part was the thermos. Rarely did liquids make it through the morning without leaking onto the rest of your lunch.

My mother preferred the red plaid variety, but I was insistent one year and arrived on the scene with a brand-new metal lunch box in brilliant color featuring Superman. For weeks, this served as lunchtime entertainment as everyone took turns reading the cartoon bubbles and turning the box to see newspaperman Clark Kent throw off his glasses and fly into the air in resplendent caped attire.

As far as clothes, again, it was simple. We wore uniforms. They started as burgundy jumpers with beige blouses but quickly changed to green plaid jumpers with white blouses bearing Peter Pan collars. You could jazz them up with a green cardigan sweater and/or a beanie. Oh, for lack of a propeller on top! Beanies were usually only seen on the younger students. The boys wore salt and pepper cords, crisply ironed shirts, and ties. I always pitied the boy who forgot his necktie.

As today, books had to be covered, but book socks were unheard of.

My father was a designing engineer and he always offered, and I always expected, that he would be the designated book coverer. I would leave my books on the dining room table with the plain brown or sometimes clear paper. In the morning when I got up, the books would be neatly covered and piled, ready for me to take to school. He did a beautiful job, measuring and folding each corner just so.

While my father handled anything “technical,” under which school supplies and covering books fell, my mother took care of the purchase of new shoes.

Back to School With Buster Brown

My mother and I would walk down Wisteria Avenue and into the Hollywood District, where the movie theater and several department stores were located.

My mother’s favorite was Miller’s. I remember its creaky wooden floors and fussy sales clerks, but in one corner of the store was the shoe department, and it was there that we would look at Buster Brown shoes.

For my mother, these were the shoes that she knew and trusted. They were made of leather, and you could polish them over and over and always get a shine. The suited shoe-man would have me stand on this thing that resembled a scale, but I think it was an X-ray machine, as he would always say, “They fit perfectly, and she has room to grow.”

Year after year, I would start the new school year with black-and-white saddle shoes or cream-and-brown saddle shoes or burgundy loafers. One year, it was black Mary Janes. But they were always Buster Browns.

Inside the shoe where your heel goes was a round decal bearing the image of the little Dutch boy with his dog.

I looked forward to our trips together to shop for school, the smell of her cologne, the brush of her coat against my cheek, and walking out of Miller’s with a brand-new pair of Buster Browns.

My pencils sharpened, my books meticulously covered, and my fountain pen not leaking, I was ready to walk down the hallways and find a new classroom each year.

My memories of those early school days are cherished. I’d like to believe that they provided me a springboard to a life of learning well beyond the classroom.

So far, first grade is going well for my granddaughter Maria. She’s putting her crayons, pencils, and markers to good use. She relishes bringing home new library books (in her backpack) each week, and I’ve seen her wearing her Mary Janes. She smiles when she talks of school.

Her memories are in the making.

Anita L. Sherman
Follow
Anita L. Sherman is an award-winning journalist who has more than 20 years of experience as a writer and editor for local papers and regional publications in Virginia. She now works as a freelance writer and is working on her first novel. She is the mother of three grown children and grandmother to four, and she resides in Warrenton, Va. Anita can be reached at anitajustwrite@gmail.com
TOP NEWS