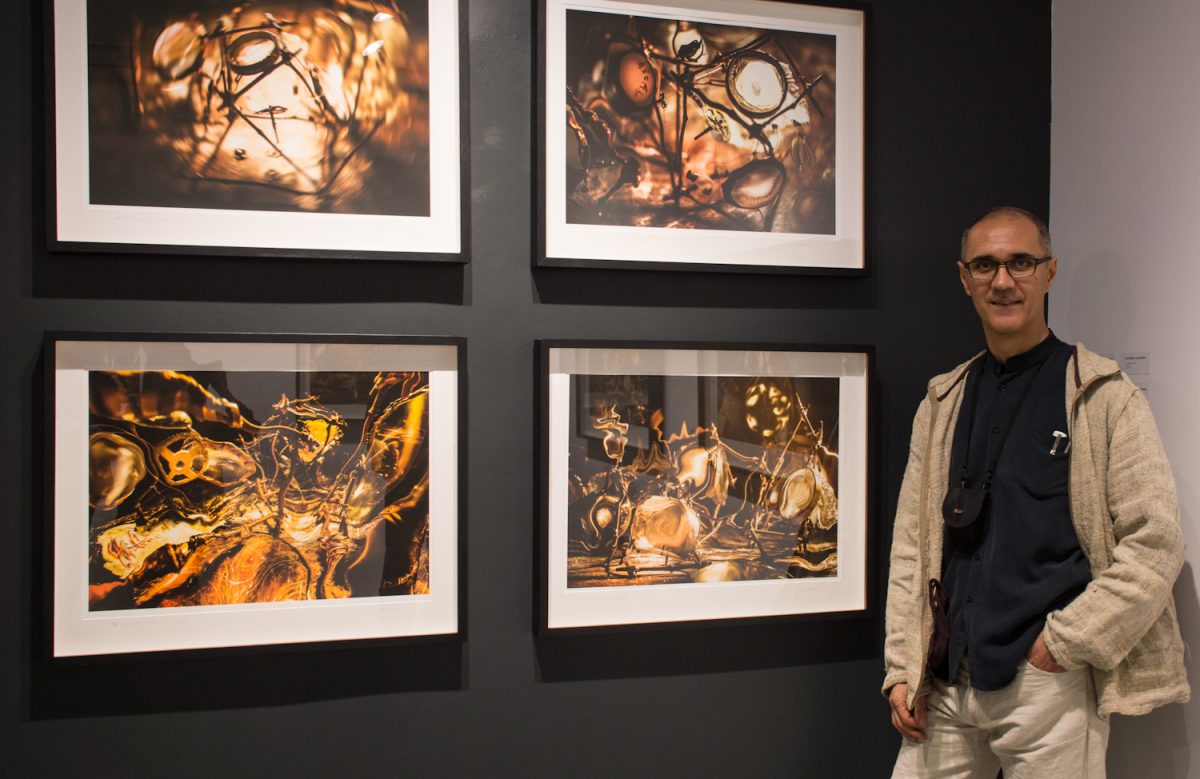 Romanian-Canadian artist Eugen-Florin Zamfirescu poses with some of his works on display at the TeodoraART Gallery in Toronto. (Elena Dumitru)
Arts & Culture

On the ‘Lanes of Quantum Memories’

TORONTO—Romanian-Canadian artist Eugen-Florin Zamfirescu is on a constant quest for new discoveries and new connections that will lead us closer to unravelling the mysteries of our existence.

From earlier exhibits—following the tracks of forgotten civilizations and predicting what might happen to ours, to revealing the effects of entropy on everyday objects—one can see that Zamfirescu is fascinated by both art and science and the potential each offers to understanding the other.

“Because of my equal love for art and science I often wander, like a Don Quixote, into the realm of one, hoping to find inspiration or answers for the other,” he says.

Zamfirescu goes on to explain his creative process. “Once a worthwhile concept is found and then gets crystallized, the artist in me takes over, to guide my thoughts, my eyes and my hands towards achieving a new series of works.”

With his latest photography exhibit, “Lanes of Quantum Memories,” Zamfirescu examines one of the most puzzling aspects of human existence—the human brain, which he believes is the key to unlocking our potential through understanding where our ideas and emotions come from.

The concept of the exhibit is inspired by the 1979 book “Gödel, Escher, Bach: An Eternal Golden Braid” by American professor of cognitive science Douglas Hofstadter. Hofstadter analyzes the works of a mathematician (Kurt Gödel), artist (M.C. Escher) and composer (Johann Sebastian Bach) in order to understand the human brain, including its ability to perceive patterns in the world.

Once a worthwhile concept is found and then gets crystallized, the artist in me takes over.
— Eugen-Florin Zamfirescu

Through photographs of various objects, such as looking glasses, lenses, clocks, wires, gears, and more, which are then digitally manipulated, Zamfirescu attempts to delve into the realm of the mind and the various forces of quantum mechanics that he thinks impact it.

Beyond what is known as biochemistry, the artist believes that electric, magnetic, gravitational, nuclear, and other forces yet unknown, and their interaction with our neurons, shape our thoughts, memories, and ideas, transforming the way we perceive the world.

Zamfirescu likens this 21st century exploration of the brain to Leonardo da Vinci’s experiments with flight during the Renaissance, as part of the human being’s quest to go beyond its limits. It is a path demanding courage, patience, and dedication—one which, according to him, will create a paradigm shift for the future of humanity.

“Lanes of Quantum Memories” runs Oct. 30–Nov. 16 at the TeodoraART Gallery in Toronto. For more information about the artist and his work, visit: http://eugenflorinzamfirescu.com