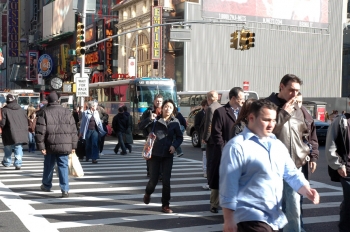 "Come on! It's the green light! What's that fellow doing?"

I sounded the horn twice before the car in front moved on.

"These people are to blame for traffic congestion! Are they colour-blind or what? They jump a red light yet when it's a green light, they just refuse to budge! Can they drive at all?" I grumbled to my friend who was with me in the car, sounding as if I was the best driver in the world.

"What the hell!" The car behind was frantically sounding the honk. I realized it was green light and quickly stepped on the accelerator. My mum fell ill just yesterday and was put in the ICU. My brother and I were contemplating when she should have an operation. I was apprehensive about it, as my mum was advanced in age. But without the surgery, her condition would deteriorate. The matter was weighing on my mind, that was why I did not notice the traffic light had turned green. "How impatient can he be! What's all the rush for?!" I muttered as I drove on.

Very often than not, we look at things from our point of view until we realize the truth.

I once read a story.

A boy was throwing a tantrum on a subway in New York. But the man beside him who looked like the father made no attempt to stop him. Everybody around the father and son was rather put off by them.

The writer of the story finally spoke up by telling the man, "Can't you see your son is making a scene? You ought to take him in hand."

The man realized what happened and apologized. "I'm sorry. My son just lost his mother in the hospital two hours ago. I'm at a loss as to what to do from now on… I'm really sorry."

All of a sudden, the writer found himself rather cruel.

When something happens, we tend to blame other people, and often expect others to be more understanding towards us.

Putting oneself in another person's shoes is easier said than done.

Nobody is a saint. We all have our moods. Before we do anything, let us spare a thought for other people.

The first thing that comes to our mind is usually emotional and shallow. But if we think further of why the other party does what he does, our anger will subside and dispute might be totally avoided.

So the next time we stop before a traffic light, let us be more patient, for the owner of the car in front might be going through some tribulation or ordeal in life.