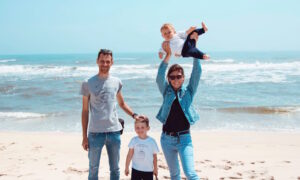 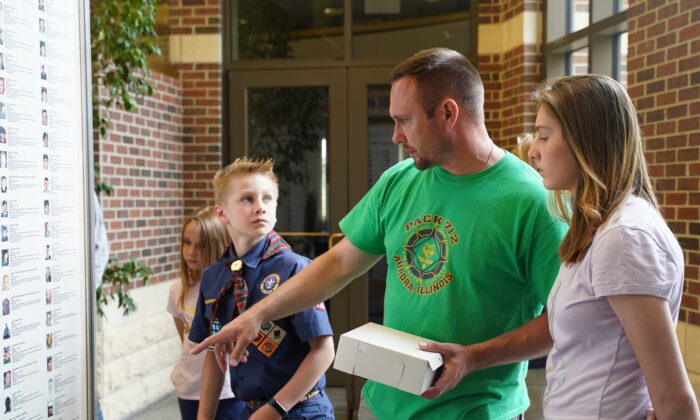 Drew Barczak tells his children about the fallen soldiers on a Wall of Honor displayed at Oswego Township Hall in Oswego, Illinois on May 31, 2021. (Cara Ding/The Epoch Times)
Memorial Day

OSWEGO, Ill.—Agoritsa Barczak, a mother of three from a Chicago suburb, pointed to pictures of fallen soldiers in Middle East wars and reminded her children that the privileges and freedom they were born in to come at a dear price.

“I remind them every day how lucky they are,” she told The Epoch Times on Memorial Day. “A lot of soldiers fought for this … everything that we consider ourselves lucky to have here.”

Agoritsa and her husband, Drew Barczak, took their kids to see the Wall of Honor, which is dedicated to soldiers killed in action amid Middle East conflicts, at Oswego city hall, just southwest of Chicago. The exhibit, which is updated annually, honors about 7,000 soldiers killed in the Gulf War, Afghanistan War, and Iraq War.

This is the first time the tribute has been displayed outside Oregon since it was created by high schooler Alicia Tallman in 2003.

Drew, a police officer who has seen his share of human tragedies, was moved to tears by a display honoring soldiers missing in action in the Middle East.

“When your country calls, they report for duty, they do what’s expected, and unfortunately, some don’t make it back,” he said. “We definitely want to pass on these experiences, so kids understand that freedom just isn’t free.”

Kim Ekker, a veteran who had served in the military in the 1980s, said she brought her 16-year-old son to the wall to pass on her understanding of the significance of Memorial Day.

“It’s important to make sure that my son knows what today is all about,” Ekker said. “The love of this country, the sacrifices these soldiers are making every day, and to just never forget they are out there keeping our freedom here.”

Ekker said seeing pictures of each fallen soldier was so different from getting the number of casualties from the news.

“You come here and you see the actual faces—they are so young. … When I see them, I think of their siblings and what their mom and dad are feeling.”

Pat Mastenbrook, operations manager of Vets Helping Vets, the organization that maintains the wall and brought it to Oswego, told The Epoch Times that the wall isn’t just a place for civilians to pay their respects and learn, but also a place of healing for combat veterans who made it home.

“Many of these veterans came looking for buddies on the wall during the night when it’s quiet,” Mastenbrook said. “Often, when they were killed, bodies were taken away, and there was no time for mourning. Their comrades have no closure for their deaths. … You see grown men cry when they leave here.”

Mastenbrook’s late husband was a Korean War veteran who later developed Alzheimer’s. During the difficult years she spent caring for him, she received unconditional help from many veterans. She decided to pay her way forward by helping veterans through the organization Vets Helping Vets. She told The Epoch Times that combat veterans killed in action deserve our tribute, but those who make it home also need our support.

“They come back damaged, and rightly so,” Mastenbrook said. “The biggest thing that helps them is knowing that there are people that care.”