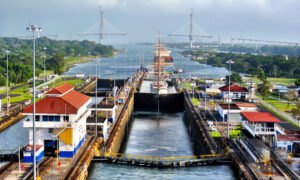 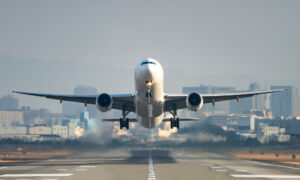 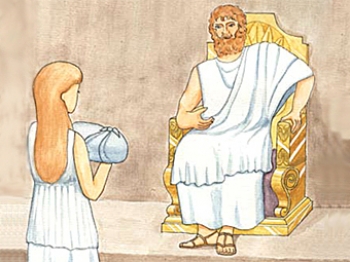 By Epoch Times Staff
Print
The Olympic Games are a celebrated and cherished event of modern times. They serve as a symbol of world unity, peace, sportsmanship, and the thrill of athletic competition.

Many already know that the Olympics originated in ancient Greece; but the actual, original origin remains unknown today, lost in the mists of time. However, many legends and myths do survive that offer different accounts of how the Games began. In the tradition of Greek mythology, these are stories where man and the divine walk the world together in close contact. The Greeks used these myths to pass on their history, teach lessons, or explain some natural phenomena. Of the stories about the origins of the Olympic Games, three are by far the most popular.

The first legend tells the creation of the universe and a war for control over all of heaven and Earth. The Greeks believe that before time and the universe existed, there was Chaos. Chaos was a formless nothingness, a dark void of empty space. Eventually Chaos gave birth to the Titan known as Gaia, the Earth. She then in turn gave birth to Uranus, the Sky, to be her equal and cover her. Joined together they then gave birth to more Titans: the Ocean, Intelligence, the Stars and the Wind, Rivers, the Sun, the Moon, the Dawn, Memory, Fate, and Rhea who was destined to become mother of the gods.

The youngest Titan was named Cronus. He would one day overthrow his father Uranus and make himself ruler of all things and father to the gods. Uranus hated all of his children and when Gaia gave birth to a race of giants, Cyclops, and monsters, he trapped them deep inside the Earth. This caused Gaia much grief, so she created a blade and gave it to Cronus to use against his father. Using the blade Cronus castrated Uranus and declared himself ruler over heaven and earth. He then took his sister Rhea to be his wife. However, all was not well, as it was prophesied that one day Cronus' children would rise and overthrow him in the way he had done to his own father. Needless to say he was not very happy when Rhea became pregnant. She gave birth to five children: Hestia, Demeter, Hera, Hades, and Poseidon. After each was born Cronus promptly swallowed them whole to ensure that they would not rise up against him.

But when Rhea gave birth to their sixth son, Zeus, she hid him away on the Island of Crete and wrapped a stone in his swaddling clothes. Mistaking the stone for the child, Cronus swallowed the rock without knowing. Free from the fate of his siblings, Zeus was raised by Gaia until he came of age, at which point he returned home to liberate his brothers and sisters. He tricked Cronus into drinking an elixir that made him vomit up all his children. Following this, a massive war erupted between the Titans and gods for control of the universe. Eventually the gods were able to subdue the Titans and imprison them in the deepest darkest places of the universe.

The final battle happened at Olympia where Zeus and Cronus met to battle. They wrestled for a great deal of time until Zeus was able to subdue his father. With this the war was over and the gods declared themselves rulers of the universe. To commemorate his victory, Zeus established the Olympic Games at Olympia so all would remember his match with Cronus.

Another myth about the Olympics revolves around the story of Zeus's son Hercules.

Zeus was a particularly lustful god, and his wife Hera was not too fond of his affairs. Zeus even consorted with mortal women, and often. After their union the woman would give birth to a demigod, a person who is half god, half human. Hera would go out of her way to cause misery and hardships for these other children of her husband. Zeus once impregnated a mortal woman named Alcmene from the house of Perseus, a Greek hero. When it was time for her to give birth, Zeus declared that on that day he would make the child born of the House of Perseus into a king. Hearing this, Hera caused Alcmene's sister in law, also of the House of Perseus, to give birth to her child three months early, while delaying Alcmene's birth. Because of this, the hastily born Eurystheus became king, instead of Alcmene's child.

Alcmene's child was named Hercules, who grew up to become the strongest man in the world. He was fabled for his unparalleled strength and courage. But Hera was not contented with having stolen the crown away from Hercules. In an act of spite, Hera caused Hercules to go into a fit of madness, ending with him murdering his wife and three children. When he came to his senses and realized what he had done, Hercules went to the Oracle at Delphi, a sage who could predict the future, to beg for forgiveness from the gods. The Oracle told Hercules that his sin would be forgiven if he were able to complete twelve labors set by the man he hated most, King Eurystheus. Eurystheus gave Hercules tasks that should have been impossible, but Hercules always managed to complete them.

These tasks became the legendary Twelve Labors of Hercules. The Fifth Labor required Hercules to clean the royal Augean Stables in a day. King Augeas had a stable of thousands of immortal oxen and horses. The stable hadn't been cleaned in ten years. Filth was piled high and the smell was so bad no one could even get near it. Hercules agreed to clean the stables if King Augeas would give him one tenth of the oxen. Thinking that the job was impossible, King Augeas agreed. Using his incredible strength, Hercules simply rerouted a nearby river to run through the stable and clean everything out. It didn't even take him the entire day he was allotted. King Augeas was furious. He refused to pay Hercules the oxen he had promised and so Hercules made war with the king.

With his unbelievable strength, Hercules was easily able to kill the King. He went on to complete all Twelve Labors. With his misdeeds now cleansed, Hercules decided to establish the Olympic Games to honor his father Zeus, and the strength and beauty of man. Hercules became the Greek ideal for strength and courage and a pinnacle of athleticism.

When Pelops grew to manhood he left for the land of Olympia which at the time was ruled by King Oenomaus. The King was offering his daughter Hippodameia’s hand in marriage to whoever could best the King in a chariot race … But there was a catch. If the suitor lost the race he would be beheaded. King Oenomaus had decorated the pillars of his palace with the many severed heads of the losers. The reasons for King Oenomaus's bloody game was a prophesy made by his Oracle. The Oracle told him that his future son-in-law would be responsible for his death.

Worried about losing, Pelops prayed to Poseidon, god of the sea and brother to Zeus. Poseidon gave Pelops a chariot pulled by winged horses to ensure his victory. However, Hippodameia, who meanwhile had fallen in love with Pelops, was worried that he might lose the race, and his life. Just before the race was to begin she changed the bronze linchpins of her fathers chariot to ones made of beeswax. Despite having the winged chariot, Pelops was neck and neck with King Oenomaus in the final turn of the race. Just when it looked like the King was about to win, the beeswax linchpin melted causing his chariot to break apart and Oenomaus was dragged to his death. Pelops was made king of Olympia and with his new wife Hippodameia, he created the Olympic Games to praise the gods and to honor the death of King Oenomaus.

Whatever the origins of the Olympic Games, their tradition continues to this day. People still honor the ideals of strength, courage and athleticism, and the ideals of peace and harmony for all people everywhere.