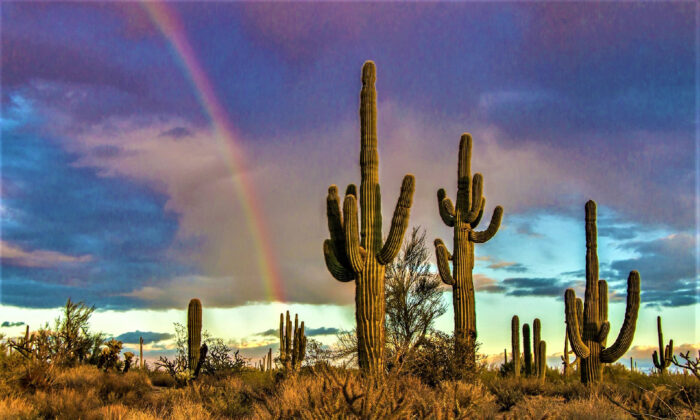 Bejeweled women dressed in the latest fashions stroll into Gucci, Neiman Marcus, and Tiffany, intent on adding to their wardrobes and adornments. My wife, Fyllis, is learning to rope cattle and clean horses’ hooves. The first impression we had during our visit to Scottsdale, Arizona, was the diversity of attractions—even when it comes to shopping.

World-famous stores are neighbors to specialty shops and boutiques. In the self-proclaimed “West’s Most Western Town,” it’s no surprise to pass places selling cowboy hats and boots and everything in between. One shop sells Native American art and artifacts created by members of more than 70 tribal nations.

The cowboy flavor remains, as Fyllis learned while she played the role of a working cowgirl. Part of her experience included a horseback ride in the Sonoran Desert, a vast wilderness that stretches through Arizona, California, and northern Mexico and covers an expanse about the size of Colorado.

It’s a cactus heaven. The majestic saguaros, which grow wild only in the Sonoran Desert, can reach 50 feet and live as long as 200 years. Other cactus species also find the Sonoran’s conditions inviting. Colorful names like purple prickly pear and teddy bear cholla add to their appeal.

What appears to be an uninhabitable wasteland in reality is home to some 60 mammal species and 350 types of birds. Their survival techniques are among Mother Nature’s most intriguing stories. Many animals sleep in the shade during hot days and venture out on cooler nights. Some survive on water they get from their food. The western banded gecko stashes away sustenance and water in its tail for use when needed.

Some of the desert’s magnificence is captured in sanctuaries and museums. The McDowell Sonoran Preserve is a mini-wilderness that’s home to hundreds of types of plants and animals as well as 225 miles of hiking trails. Five paths meander through the Desert Botanical Garden past its collection of plants from barrens around the world. Each path focuses on one topic, including plants of the Sonoran, desert wildflowers, and conservation.

Exhibits about how people lived in the hostile environment include how Native Americans used plants for food and medicine. Fyllis and I checked out the kind of roundhouse they once built and paused at a grinding stone to pound mesquite beans into flour as they did.

The Pueblo Grande Museum and Archaeological Park sits atop the remains of a village of the Hohokam people, who inhabited the area from about A.D. 450 to 1450. They were the first to cultivate the Sonoran Desert, using a system of irrigation ditches. Some of the trenches—and a ball court—still are visible.

Along with museums, Scottsdale’s neighborhoods combine interesting historical tidbits with shopping and recreational opportunities, with the center of much action being the Old Town neighborhood. Located on the original site from which the community expanded, this is a hub of museums, historic structures, dining, and shopping. From cowboy wares to Native American jewelry to brand-name items, any shopper who can’t find ways to spend money there isn’t trying.

Old Town is also crammed with many of the city’s more than 100 art galleries. Even the streets serve as an outdoor museum, with dozens of works that include a giant lizard, a metal rider astride a bucking horse, and a number of abstract sculptures on display.

Very different in atmosphere and appeal are tiny enclaves on the outskirts of Scottsdale. Cave Creek (population about 6,000) was settled in 1870 by miners and ranchers and served as a stopping point for U.S. Cavalry troops. The town clings proudly to its Western stores that sell cowboy gear, colorful saloons, and periodic rodeos.

While Cave Creek keeps alive vestiges of the Old West, the adjacent village of Carefree represents the present. It was built as a planned community of homes, some now valued at millions of dollars, that line streets with names like Easy, Tranquil, and Ho Hum.

Locals describe this juxtaposition of Old and New West as the “home of cowboys and caviar.” That same comfortable marriage of old with new, casual with chic, is everywhere. It’s common in and around Scottsdale to see men and women wearing jeans and Western hats carrying high-end purchases out of shops that would feel comfortable on New York’s Fifth Avenue or Rodeo Drive in Beverly Hills.

At one point, Fyllis and I came upon a gourmet hamburger restaurant where the parking lot was packed with top-of-the-line automobiles. The locals call it “Burgers and Bentleys,” a combination of upscale life with a laid-back attitude that adds to the charm and appeal of Scottsdale.

For more information about Scottsdale: ExperienceScottsdale.com, 800-782-1117.