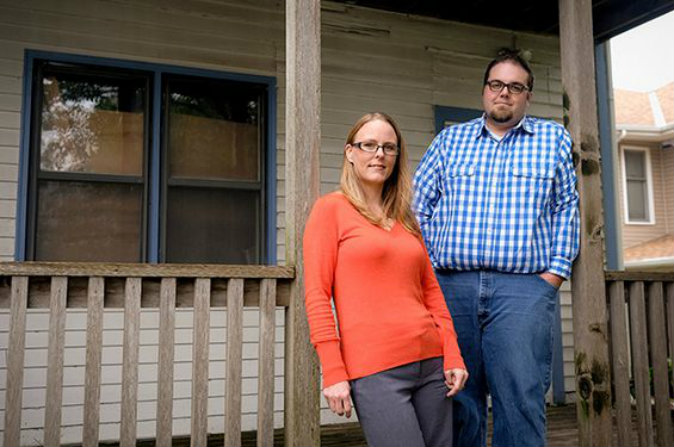 For Cassandra Rose and Conrad Goetzinger, shown on the porch of their home in Omaha, Neb., wage garnishments are the single largest expense in their budget. (Eric Francis/AP for ProPublica)
Debt Management

Critics say the 1968 federal law that allows collectors to take 25 percent of debtors’ wages, or every penny in their bank accounts, is out of date and overly harsh.

This story was co-published with NPR.

Like any American family living paycheck to paycheck, Conrad Goetzinger and Cassandra Rose hope that if they make the right choices, their $13-an-hour jobs will keep the lights on, put food in the fridge and gas in the car.

But every two weeks, the Omaha, Neb. couple is reminded of a choice they didn’t make and can’t change: A chunk of both of their paychecks disappears before they see it, seized to pay off old debts.

The seizures are the latest tactic of debt collectors who have tracked the couple for years, twice scooping every penny out of Goetzinger’s bank account and even attempting to seize his personal property. For Goetzinger, 29, they’re the bewildering consequences of a laptop loan he didn’t pay off after high school; for Rose, 33, a painful reminder of more than $20,000 in medical bills racked up while uninsured. The garnishments, totaling about $760 each month, comprise the single largest expense in the budget.

“I honestly dread paydays,” said Goetzinger. “Because I know it’s gone by Saturday afternoon, by the time we go grocery shopping.”

Across the country, millions of other workers face a similar struggle: how to live when a large fraction of their paycheck is diverted for a consumer debt, as ProPublica and NPR reported Monday. The highest rates of garnishment are among workers who, like Rose and Goetzinger, earn between $25,000 and $40,000, but the numbers are nearly as high for those who earn even less, according to a new study by ADP, the nation’s largest payroll services provider.

Those who fall into this system find their futures determined by laws that consumer advocates say are outdated, overly punitive and out of touch with the financial reality faced by many Americans.

“Most low income people are struggling to keep up with basic fixed costs,” said Michael Collins, faculty director of the Center for Financial Security at the University of Wisconsin-Madison. “That tends to absorb most of the budget. There isn’t much left.”

ADP’s study, requested by ProPublica, offered the first large-scale look at how many employees had their wages garnished and why.  In the Midwest, one in 16 workers earning between $25,000 and $40,000 had wages seized for a consumer debt in 2013. These numbers reveal a hidden population, advocates say, and should spur lawmakers to offer more protection.

The federal law regulating garnishment harkens back to 1968, when the financial life of Americans was much simpler. Time has eroded what even then were modest protections. The law barred creditors from taking any wages from the very poorest of workers, but used a calculation based on the minimum wage to identify them. Since the federal minimum wage hasn’t kept pace with inflation, today, only workers earning about $11,000 annually or less— a wage below the poverty line— are protected. The law also allows collectors to garnish a quarter of a debtor’s after-tax pay, an amount that government surveys show is plainly unaffordable for many families.

And the law is silent on perhaps the most punishing tactic of collectors: It doesn’t prohibit them from cleaning out debtors’ bank accounts. As a result, a collector can’t take more than 25 percent of a debtor’s paycheck, but if that paycheck is deposited in a bank, all of the money in the account can be grabbed to pay down the debt.

State laws, while often more comprehensive than the federal rules, vary widely. Only a handful, for instance, automatically protect a minimum amount of funds in a debtor’s account.

When garnishment protections do exist, the burden is usually on debtors to figure out if and how the laws protect their assets.

“In an awful lot of states, the information that the employee gets is going to be very, very confusing,” said William Henning, a law professor at the University of Alabama and chair of a committee drafting a model state law on wage garnishment.

Shortly before Thanksgiving in 2008, as the country was in the throes of the great recession, Goetzinger faced an unexpected financial crisis of his own. Every penny in his bank account, $688.43, went missing.

In a panic, he called his bank for an explanation, and discovered that a company he’d never heard of had garnished the account. There was nothing he could do.

The company, Midland Funding LLC, struck again five months later. Just $179.14 was in the account, but Midland took it all anyway. This time the damage extended beyond the lost cash, Goetzinger said. Not knowing the account was now at zero, he overdrew it. That triggered an overdraft fee, he said, and then another. Soon, the fees had him in a several-hundred-dollar hole. That’s when Goetzinger and Rose decided they’d had enough of banks. Goetzinger closed his account.

“What if they decided to, on payday, pull out every single bit of money we had in there?” said Rose. “That would completely devastate us. I don’t know what we would do, where we would go, how we would eat.”

Collins, who studies consumer decision-making, said this well-founded fear of banks is a common, and worrisome, consequence for low-income workers with outstanding debts. “We certainly hear that from consumers,” he said.

Back in 1968, when lawmakers passed the landmark Consumer Credit Protection Act, it specifically limited how much of a debtor’s pay could be seized. But it made no mention of bank account garnishments.

Carolyn Carter, director of advocacy at the National Consumer Law Center, said the lawmakers didn’t address bank seizures because they simply weren’t common at the time. As a result, she said, “the wages that are deposited in a bank account become suddenly much more vulnerable than anyone realized.”

Since the late ’60s, debt collection has changed in other ways that lawmakers couldn’t have anticipated. Today, buying old debt is an industry in itself.

Goetzinger’s bank account, for instance, was garnished by Midland Funding. Midland is a subsidiary of the publicly-traded Encore Capital Group, one of the country’s largest debt buyers. Last year, the San Diego-based company collected more than $1 billion on old debts.

At the time, the name Midland Funding meant nothing to Goetzinger. Uninsured and epileptic, he assumed the raids on his bank account stemmed from unpaid medical bills. But that wasn’t the source of the underlying debt—as Goetzinger learned this August when a reporter shared a copy of his court file with him. Even still, it was clear that the involvement of Midland, and its rights to pursue him, remained hazy.

About 10 years ago, shortly after graduating from high school, Goetzinger said, he bought a laptop. At some point, he fell behind on the payments to Dell, although he does not remember the circumstances. In 2008, court records show, Midland filed suit, saying it bought the debt from Dell’s lending arm. At the time of the suit, Midland claimed Goetzinger’s debt, including interest and fees, stood at $2,400.

The court file shows that a summons for the lawsuit was left at Goetzinger’s current address in 2008. However, Goetzinger said the house, which is owned by his step-father’s parents, was undergoing renovations and uninhabited at the time. Nebraska state law doesn’t require that defendants be served personally with lawsuits.

Encore Capital spokeswoman Lisa Margolin-Feher said the company only files suit against consumers when other attempts to collect are unsuccessful. “Our preference, by far, is to work directly with a consumer to tailor a repayment plan, rather than having to resort to state garnishment laws.”

Altogether, Midland has tried three different methods of collecting against Goetzinger. After multiple further attempts on his bank account proved unsuccessful, the court record shows, the company twice tried seizing his personal property in 2010 and 2012, but a sheriff deputy determined each time after visiting Goetzinger’s home that he owned nothing eligible for seizure. Finally, early this year, almost six years after the lawsuit was filed, Midland served Goetzinger’s employer with a garnishment order.

For most workers, the unexpected loss of a quarter of their wages would make life difficult. For low income workers who live from paycheck to paycheck, it can be devastating.

The Consumer Expenditure Survey, produced by the Bureau of Labor Statistics, reports that, for a worker with annual wages between $20,000 and $30,000, the average amount spent on basic costs such as housing, transportation, food, and health care is about $26,000. The average income for that population is also about $26,000.

A recent survey by the Federal Reserve asked thousands of consumers whether they could afford an emergency expense of $400. Less than half of respondents said they could without borrowing money or selling something. Nearly 20 percent said they could think of no way they might cover such a cost.

So how did the federal lawmakers in 1968 set 25 percent as the allowable limit for garnishments? Like many laws, it was the result of closed-door compromise.

“For a poor man—and whoever heard of the wage of the affluent being attached?—to lose part of his salary often means his family will go without the essentials,” argued Rep. Henry Gonzalez of Texas, in a speech on the House floor.

In the end, the House version of the consumer protection bill limited garnishment to 10 percent of income. But the Senate’s version didn’t limit garnishments at all. When a compromise bill finally emerged from a committee of lawmakers from both houses, the limit was 25 percent. Forty-six years later, that’s still the law in more than half of states.