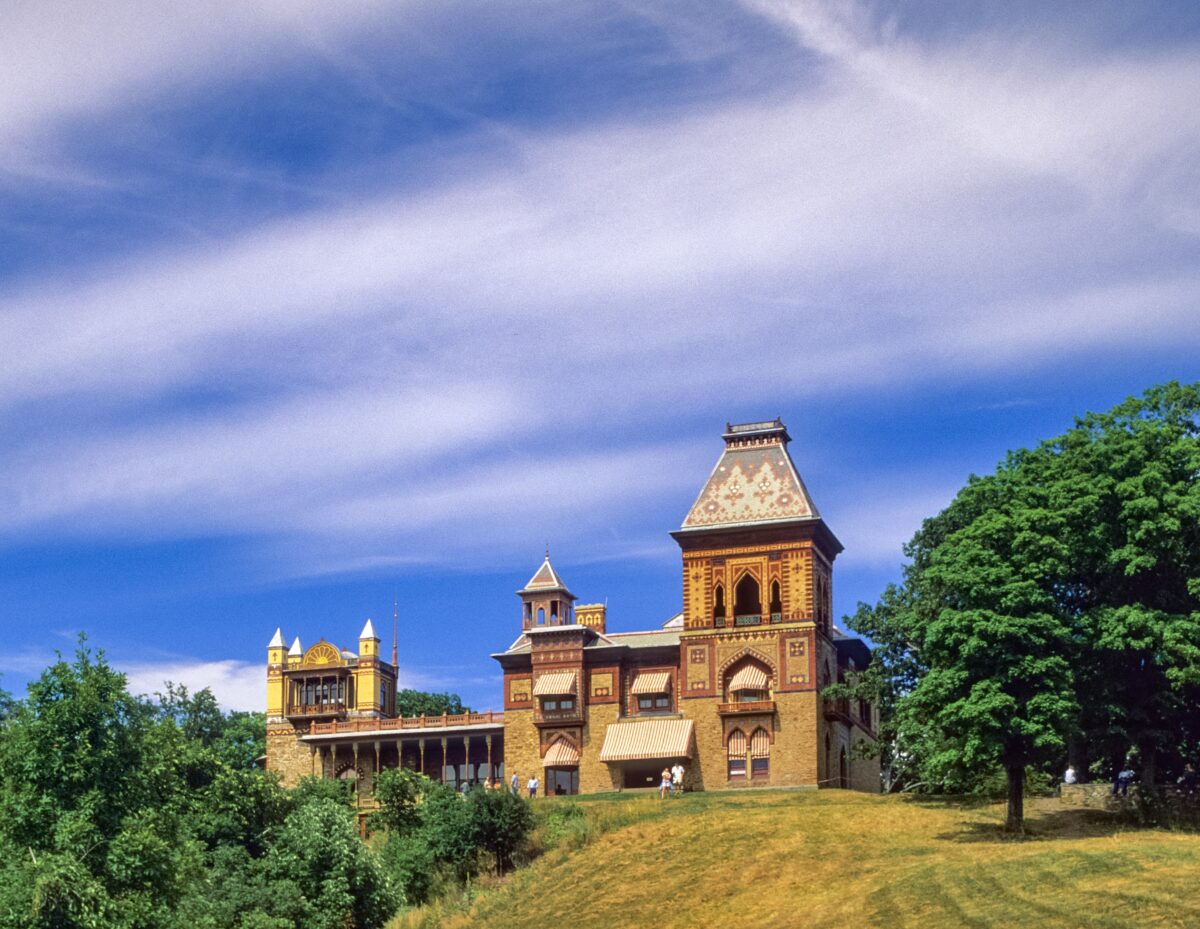 A view of the south facade of the main house at Olana.(Peter Aaron)
American Essence

On a ridge overlooking the Hudson River, artist Frederic Church composed his last, and perhaps grandest, work: a home and grounds for his family. He purchased the land above his first home, “Cosy Cottage,” before his trip to the Middle East and Europe. “I have just purchased the woodlot on the top of the hill. I want to secure if possible before I leave every rood [measure] of ground that I shall ever require to make my farm perfect.” Church’s vision was ambitious; not only did he want to expand his working farm, Church set out to create a foreground for the magnificent scenery in the distance—linking together a series of vistas with landscaped carriage roads. Church had formerly served as the park commissioner of Central Park and was fascinated with the possibilities of creating beautiful landscapes, working with the beauty already present in the natural world.

The hilltop that Church purchased was the same location that he and Thomas Cole visited when he was under the tutelage of Cole. The property overlooked Cole’s home on the Hudson River, and they would often walk there and sketch. Many of Church’s earliest works were inspired by the scenes from this particular site, and it was that very landscape that had started him in his work. Though Church was once the most famous artist in America, his popularity (and career) waned in the 1870s. There was no longer a great demand for his large canvases, and commissions for his paintings of antiquities decreased in frequency. His rheumatoid arthritis also made painting more difficult. As the world forgot about Frederic Edwin Church, the great artist still had the means to devote himself to his family and the building of their amazing estate—a task he set about with great energy.

From his days exploring the Maine wilderness, Church was keen on integrating human activities harmoniously with unspoiled nature. He even illustrated cottages and mills into his paintings of Katahdin, though they did not exist. When he returned from his travels, he planted trees—over 1,000 of them—and laid out the carriage roads. His property became the canvas upon which he began composing a living landscape. Church wrote of this process: “For several seasons after I selected this spot as my home, I thought of hardly anything but planting trees, and had thousands and thousands of them set out on the southern and northern slopes.”

New York architect Richard Morris Hunt had formerly designed the Churches’ “Cosy Cottage” and was retained by Church to design the house on the top of the hill. Following the model for the Park Avenue homes he created for his wealthy clients, Hunt sketched out a building that was largely Victorian en masse but a French château in style. Hunt went on to create George Vanderbilt’s vast “Biltmore” estate in the mountains of North Carolina.

Church had a different vision for his estate; his imagination had been stirred by a far more exotic muse. Awakened by his travels in the Middle East, Church found inspiration in Moorish and Persian designs. He asked his friend and architect Calvert Vaux (one of the designers for New York’s Central Park) to help him with the creation of this new vision. It was Church himself, however, who brought the project to life, and he fully immersed himself in building this masterpiece. He created scores of renderings as he experimented with the Eastern motifs; the tile patterns, intricate tile work, and screens flowed from his hands. The paint colors for the various rooms were initially mixed on Church’s palette. Though Hunt’s original massing of the house remained, Vaux and Church transformed it into a treasure palace from another land. The Churches named their palace “Olana,” inspired by a legendary Persian treasure house and fortress, thought by some to overlook the Garden of Eden.

The house was built between 1870 and 1872. Church himself designed many of the details and taught the local craftsmen the correct way to build them. “A feudal castle, which I am building under the modest name of a dwelling house, absorbs all my time and attention. I am obliged to imagine Persian architecture, then embody it on paper, and explain it to a lot of mechanics.” Church often experimented with a variety of designs on paper before committing them to actual construction. The Churches and their four children moved into the upper floors even though the interior of the house was not completed until 1876. Isabel Church homeschooled their children when they were young. Family was the focus for both parents, and they always traveled together. “Olana” became the canvas that Frederic and Isabel Church continued to work on together.

“Sometimes the desire to build attacks a man like a fever, and at it he rushes,” Church said of his passion for the house. Together, he and Isabel created a space for their family to live in that reflected their creativity and imagination. They filled the house with furnishings acquired on their 18-month trip to Europe and the Middle East. Church obtained fine art by other artists and was even able to buy back some of his own work at auction. The house became a gallery as well as a celebration of the family’s life.

The dining room was a mixture of European and Middle-Eastern styles, and Church selected copies of old masterworks to hang on its walls. Every inch of the house was filled with decorative art. Windows, framed by Persian motifs, opened upon magnificent views. In 1871, Church wrote: “The house will be a curiosity in architecture, and the picture from each window will be truly marvelous.” The eclectic decor was indeed an invitation to great conversations.

Though the Churches were forgotten by the world outside, they still entertained their many friends in their new palace. Author Samuel Clemens (Mark Twain) visited “Olana” and read poetry there. The day at “Olana” began with breakfast promptly served at 8 o’clock. After breakfast, the family and guests would gather in the sitting room for Bible reading before engaging in outdoor activities. Acres of wonder awaited discovery. In addition to being a working farm, Church’s landscapes provided endless vistas of the beautiful Hudson Valley. Lunch followed a full morning of activities, after which guests devoted themselves to quiet activities such as reading, napping, and letter writing.

Evenings would find the family and their guests gathered on the piazza to savor the views in the golden light. After dinner, there would often be recitations, tableaux, readings, and charades in the richly appointed court (center) hall. Don Wescott, narrator for a documentary about “Olana,” said: “The Church family home framed the living of daily life. It nurtured and protected their family.” The construction of the Churches’ estate also illustrated the journey made by Frederic and Isabel: a young couple that endured the death of their first two children and rose together to create a masterpiece home for their continued family to enjoy. Isabel passed away in 1899 and Frederic 11 months later. “Olana” the house lives on as a wonderful curiosity, but “Olana” the home is so much more—it truly celebrates lives well lived.

“They say my final masterpiece was this house upon the hill.” —Marc Cohn

In 1997, “Olana” was featured in Architectural Digest, where American singer-songwriter Marc Cohn picked up a copy and found inspiration. What Cohn discovered about Frederic Church motivated him to write the song he also titled “Olana.” “[Church’s] story about his family life and his creative life and his deep love for both resonated with me,” Cohn wrote. “Immediately after reading the article I started writing the lyric. As soon as I hit upon the idea of writing it in the first person—as Frederick Church—I was off and running.”