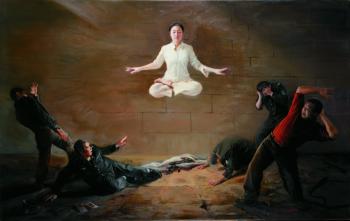 NEW YORK—Of the 19 oil painters who received an award in this year's Chinese International Figure Painting Competition, two of the top prize winners chose to paint on the same subject—one that is dear to their hearts.

“I started this painting with the hope to illustrate what is happening in China right now,” said gold winner Michelle Chen from Canada. Her piece, titled “Shock,” portrays the scene in a modern Chinese jail house, where a practitioner of the spiritual practice Falun Gong had been beaten because of the Chinese regime's campaign to eradicate the faith. Though the theme is dark, ultimately, the painting's message is one of hope.

In the scene the woman, dressed in white, levitates in meditation as her jailers look on in shock. “She is so beautiful even though she's been shackled. She's serene and compassionate,” Chen said. “Some of the police are shaken, one is kneeling in reverence, and others are afraid of what they see.”

{ntdtv http://english.ntdtv.com/ntdtv_en/ns_asia/2009-12-07/126884496715.html}
One of two silver prize winners is Li Yuan from Japan. His painting, like Chen's, illustrates the quiet strength that Falun Gong practitioners exhibit while under persecution. In his piece “Imprisoned Dafa Practitioners,” a man hanging from chains is heckled by three Chinese policemen, one of whom is piercing the victim's skin with a metal object. Despite all these, he looks upward into the light.

“The focus is not on the pain,” Li said. “I wanted to show the upward spirit rather than the pain—the inspiration was a simple idea.”

Li and Chen were two of 35 finalists whose submissions were put on display at Salmagundi Art Club through Dec. 5. Contestants entered paintings on a wide variety of subjects, including rural life, as in the work of silver winner Wei Way with “Old Woman Who Patches Clothes,” family, self portraits, nomads, and the native peoples of Asia.

Open to artists of Chinese descent, the competition is presented by New Tang Dynasty Television whose mission it is to promote and restore the tradition arts of East and West. The conclusion of the painting competition marks of the end of another round of NTDTV's annual competition series.