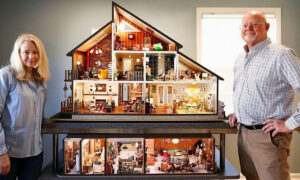 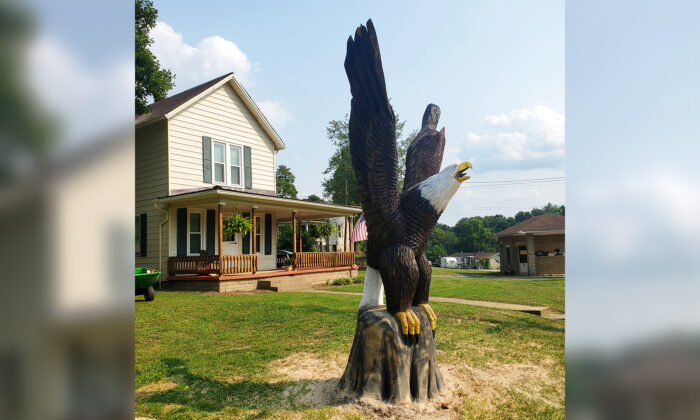 The majestic beauty of the American bald eagle never fails to inspire true patriots. An Ohio craftsman has immortalized this inspiration by carving two massive wooden bald eagle sculptures, which were recently honored during a flag-raising ceremony.

The impressive project, symbolizing the strength and freedom of the United States, was undertaken to honor veterans for their selfless service.

“These are some of the largest bald eagle carvings in the world!” McGrath told The Epoch Times.

Hall and McGrath’s shared project, which started around the Fourth of July and has since grown significantly, was conceived as a personal venture. However, it didn’t take long for local residents to notice the mighty sculptures slowly coming to life. Once the carvings were complete, the crowd of admirers only grew stronger.

On receiving an overwhelming response to his iconic creations, McGrath told The Epoch Times that he’s truly humbled.

“What an amazing project,” he said. “I am humbled by the public’s interest in my art.”

McGrath told WTAP-TV that he wanted to put an old tree to full use in a more creative way, instead of just carving a 4-foot bird.

After Hall encouraged him, telling him that he had the creative ability to go ahead and “just make it,” McGrath transformed the wooden lump into a 12-foot-6-inch-tall soaring bald eagle stand-alone masterpiece.

Carving both eagles took about a week to 10 days, with 8 hours of crafting work each day, according to the report.

“A lot of people are taking interest in it. … If it satisfies the community that much I’m all for it,” McGrath told the outlet.

The breathtaking work of art has been attracting traffic to the area since then. On Aug. 13, the bald eagle sculptures were displayed in their full glory after being commemorated in a special, official flag-raising ceremony.

McGrath said that it was “amazing” to have the veteran color guard do the official flag raising and to witness how much the community has loved their project.

“I think this is a wonderful addition for some people to really understand what our country is here for,” Hall told the outlet in another interview.

The captivating display is an apt ode to veterans and is surely serving to inspire the community as well. Check out some more photos below: