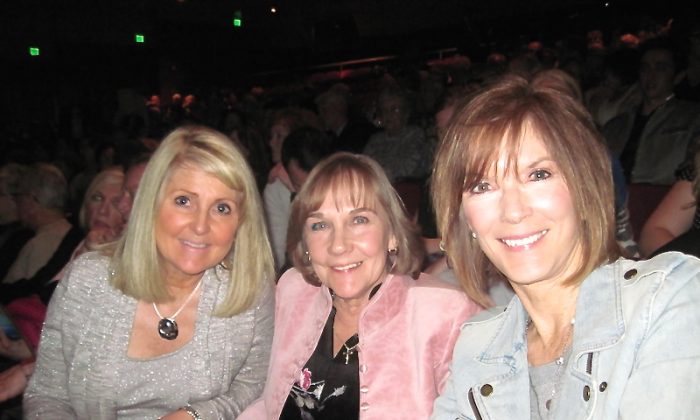 Becky Trujillo (L) with her friends at the Shen Yun Performing Arts performance at the Val. A. Browning Center on March 4, 2014. (Epoch Times)

“I thought it was great. The colors are neat; the performances are neat … It was great,” said Glen Judkins, a retired detective.

Based in New York, Shen Yun was formed by a group of leading classical Chinese artists with a mission to revive China’s divinely inspired culture. The company tours the globe each year, presenting its performances that feature classical Chinese dance and music to audiences worldwide.

He said that the performance allowed him to appreciate a China he wasn’t previously aware of and that it had opened him to a new awareness.

Mrs. Chipman, who has studied dance and has worked as a fitness instructor, said the dances were very expressive and beautiful.

Becky Trujillo, who runs an editing and publishing organization, said she found the performance very elegant.

“We loved all of the colors. We loved the fact that they’re in unison … We were actually just in awe of the whole performance; we very much enjoyed it, beautiful,” said Ms. Trujillo, who came to see Shen Yun with her friends.

“I hear the music and I see the dancers, it’s very calming.”