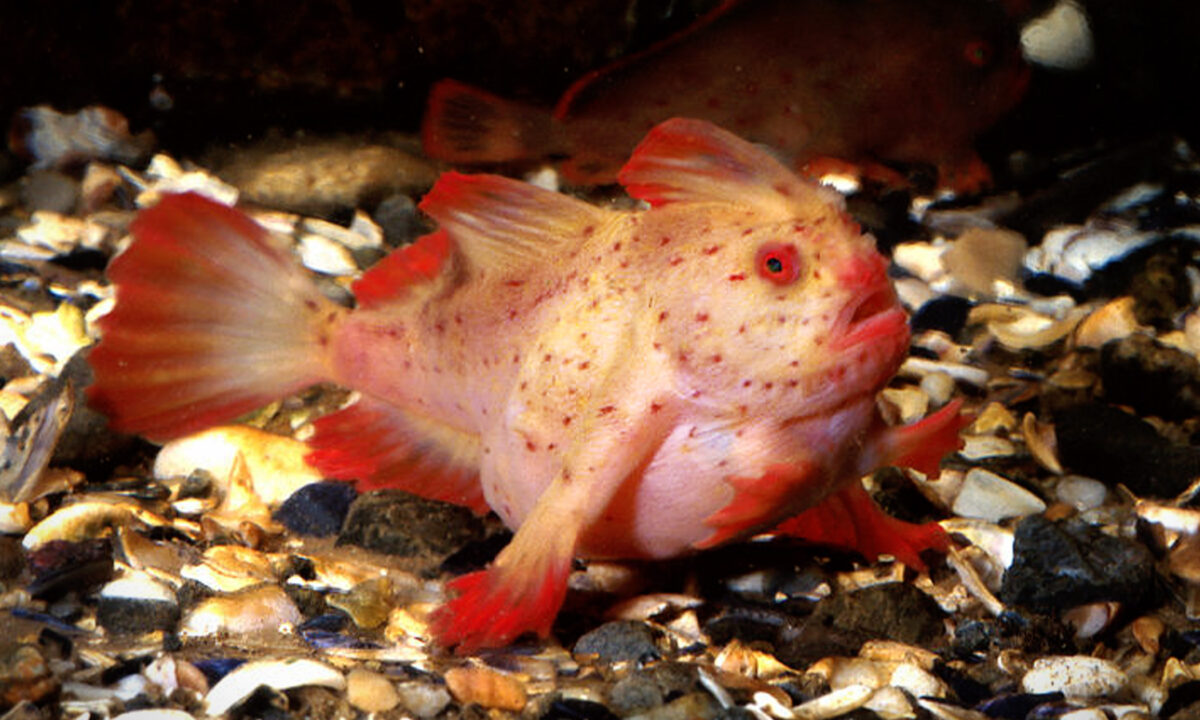 This image has been color corrected. (CSIRO/CC BY 3.0)
Discovery

Ocean researchers conducting a survey off the coast of Tasmania recently had a rare and exciting encounter with a “walking” pink handfish—a strange swimmer that hasn’t been sighted in 22 years.

But it wasn’t until August that a research assistant spotted the pink handfish.

Footage from the survey shows several rock lobsters competing for bait near the camera when one crustacean disturbs a pink handfish (Brachiopsilus dianthus) hiding amidst swaying seaweed and coral.

Not taking well to the intrusion, the small fish darts out of sight.

“I was watching one of our rough videos and there was a little fish that popped up on this reef ledge that looked a bit odd,” researcher Ashlee Bastiaansen of the University of Tasmania’s Institute of Antarctic and Marine Studies told ABC.

“I had a closer look and you could see its little hands.”

The survey was a joint effort of the university and Parks Australia to understand and document species inhabiting the “inhospitable environments” of the protected marine park, said expedition lead Neville Barrett, an associate professor at the University of Tasmania.

“Collaboration is the key to surveying this extraordinary marine park where underwater canyons and mountains hold a remarkable diversity and abundance of marine creatures, most of which are found nowhere else in the world,” added Parks Australia’s Jason Mundy.

The park is known for its key ecological feature: a 4-kilometer-deep fissure where marine life has been found at depths of over 4,000 meters.

Pink handfish—like other handfish—are oddities in that they use their large front fins as “feet” and quite literally prefer to “walk” along the ocean floor rather than swim—although they do swim, as the footage shows.

The pink variety is one of 14 types of handfish (a type of angler fish) found around Tasmania and was thought to dwell only in sheltered bays in shallower regions.

“The biggest surprise was in finding a pink handfish in the park at a depth of around 120 meters,” Barrett said.

“Until this sighting, the species had only ever been recorded four times and was listed as a rare species under Tasmania’s Threatened Species Act earlier this year.

“This is an exciting discovery and offers hope for the ongoing survival of pink handfish, as clearly they have a wider habitat and distribution than previously thought.”

The last pink handfish spotted prior to this was off the coast of the Tasman Peninsula in 1999.

The species was recently classified as endangered, but the new sighting offers hope that more might be found and that its endangered classification could be reversed.

“The research team looks forward to finding more handfish and other unusual species in this area in the future, as part of ongoing collaborative studies supported by Parks Australia,” Barrett added.