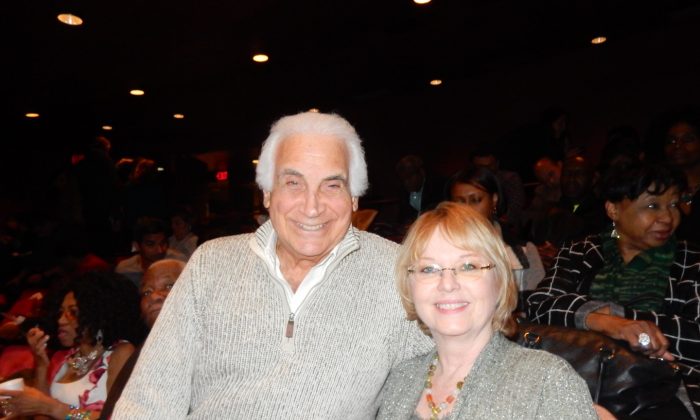 NEW YORK—This year was the second time that Hon. Gregory P. Peterson, Commissioner of the New York State Board of Elections and law firm partner, and his wife Patricia have seen Shen Yun Performing Arts.

The first time was around five years ago, and after finally being reacquainted with the performance, the couple praised the production.

“And they were expert dancers, the story itself is very intriguing.”

The couple attended the performance at Lincoln Center, New York, on March 16. The classical Chinese dance company is currently touring the world bringing 5,000 years of Chinese culture and history onto the stage for modern audiences.

The performance consists of about 20 self-contained segments, which include classical Chinese dance or ethnic dance vignettes, stories told through dance, and musical soloists.

Mrs. Paterson said they particularly enjoyed the classical Chinese dance piece titled “Sleeves of the Tang Palace,” in which female dancers don brightly colored costumes with long flowing sleeves, similar to those worn by the ladies of the court during the Tang Dynasty, which reigned from the 7th to the 10th centuries.

“The dancers are phenomenal. The music is extraordinary,” she said.

Each music piece played by Shen Yun’s live orchestra was composed specifically for the performance, and is refreshed each year. The music is unique because it includes sounds from both Chinese and Western instruments, merging the best qualities from both musical traditions.

Mr. Peterson, who has held public office for many years including previously as Councilman and also Supervisor of the Town of Hempstead, Long Island, said he saw a deep spirituality shine through the performance.

“It’s very moving, it’s happy, but there is a great sense of spirituality,” he said.

The production took Mr. Paterson through 5,000 years of Chinese civilization, allowing him to see how it has developed all the way to modern times, when the traditional culture has been suppressed by the communist regime.

“They yearn for that kind of freedom and expression, freedom to be able to enjoy the philosophy of living, which is what this is all about. It’s good,” Mr. Peterson said.

In addition to stories from ancient China, Shen Yun depicts scenes based on true events taking place in China concerning the persecution of Falun Gong practitioners. Falun Gong, also known as Falun Dafa, is a spiritual practice involving meditation exercises and a set of teachings based on the principles of Truthfulness, Compassion, and Tolerance.

The Chinese Communist Party (CCP) banned the discipline in 1999 after its immense popularity saw an estimated 70 to 100 million people practicing in China. As a result of the crackdown, many practitioners have been sent to prison, tortured, or even killed for their faith.

The depiction of such stories of suppression of faith is one reason why Shen Yun is prohibited from performing China. The company has also faced interference from the CCP in many cities around the world. For example, Chinese officials have pressured theaters to not hold, or cancel Shen Yun performances, and have also pressured government officials not to attend the performance.

In the case of New York this year, a Beijing front group has protested outside Lincoln Center for every performance. The protesters carry propaganda slogans and hate speech against the company and Falun Gong.

Mr. Paterson said it was intimidating to see the protestors as they arrived to the theater, adding that he was glad the emcees explained that the protesters were sent by the CCP during the performance.

“If they want to protest that much, and they feel that the freedom here isn’t appropriate, [then] the communists that are here should go back … to communist China,” he said.

With reporting by Wei Yong.