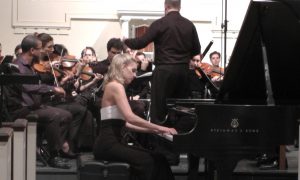 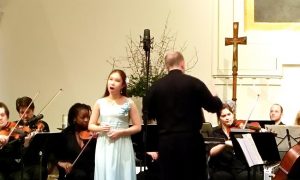 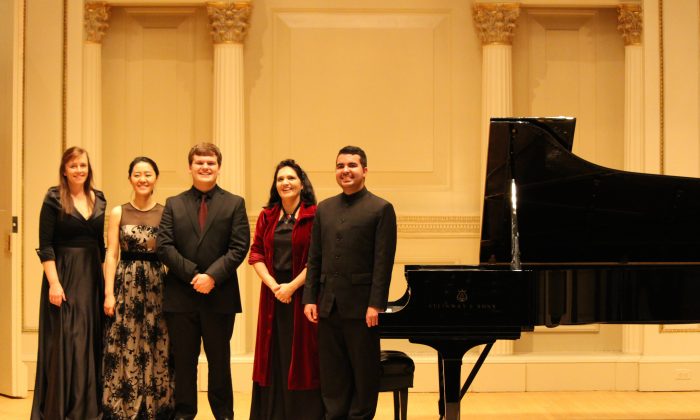 NEW YORK—A magical performance of a magnificent Mozart piano concerto was a highpoint of a pair of concerts presented by the New York Concerti Sinfonietta on Oct. 19 and 21.

The first concert, held on Oct. 19 at Carnegie Hall’s Weill Recital Hall, presented 2014 International Shining Stars Competition winners in New York debuts. It began with an unusually diverse assortment of five soloists appearing with orchestra, each of whom played a different instrument. A soprano was also heard in Mozart arias. The balance of the program showcased six unaccompanied pianists.

The second concert, on Oct. 21 in the splendid acoustics of Cary Hall at the DiMenna Center in Midtown, spotlighted two first-place winners of the 2014 Chicago International Amateur Piano Competition. New Yorker Stanley Sisskin and Ireland-born Deirbhile Brennan were winners in the concerto and solo categories, respectively.

Accompanying both concerts was the superb New York Concerti Sinfonietta, sensitively led by principal conductor Paul Hostetter. The founder and artistic director of the Sinfonietta is Dr. Julie Jordan. She is currently in her 29th year on the piano faculty of The Juilliard School Evening Division.

Sisskin had previously appeared with the New York Concerti Sinfonietta, but nothing I had heard from him before prepared me for the extraordinary level of playing he exhibited on this occasion. Sisskin gave an inspired performance of Mozart’s masterful Piano Concerto No. 24 in C Minor, K. 491, that most professionals would despair of matching. Sisskin even composed a stylish, imaginatively contrapuntal and modulatory first movement cadenza that Mozart would not have been embarrassed to claim authorship of.

Sisskin played from memory. His tempi for all three movements were ideal. His touch was varied, embodying a subtle dynamic range perfectly suited to the music. Technically, Sisskin was virtually flawless, exhibiting enviably even scales, arpeggios, and trills. His phrasing was insightful. Interpretatively, he penetrated to the emotional core of this profound work.

Maestro Hostetter matched him phrase for phrase, eliciting caressingly beautiful, elastic playing from the outstanding orchestra comprising some of New York’s finest soloists, principal players, and chamber ensemble musicians. In the Mozart, the orchestra’s ravishing woodwinds dialogued with the piano as if they were operatic soloists. The French horns covered themselves with glory, while the string sections’ timbre glowed luminously.

On the basis of this exalted performance, to refer to Sisskin as an amateur is to commit sacrilege. After Sisskin’s Mozart concluded the concert, the audience headed home wreathed in smiles and in a joyous mood, buoyed by his revelatory reading of this poignant masterwork.

That same evening, Dublin-based Deirbhile Brennan delivered a sturdy, large-scale traversal of the first movement of Beethoven’s Piano Concerto No. 4 in G Major, Op. 58. Playing from memory, she emphasized the Fourth Concerto’s parallels to Beethoven’s declamatory “Emperor” Piano Concerto, rather than to his more lyrical, contemporaneous Violin Concerto.

It was a carefully and thoughtfully worked-out interpretation, played with robust tone, which handily surmounted the work’s formidable technical challenges. She presented a nicely nuanced performance with supple phrasing, technically confident in the manner in which she accented the filigree of the cadenza.

On Oct. 19, Brennan gave an atmospheric account of Janacek’s cryptically enigmatic Piano Sonata “1.X.1905,” and a rippling rendition of Ravel’s shimmeringly aquatic “Ondine” from “Gaspard de la nuit.” The previous day, she had the honor of being presented by the Sinfonietta in a solo recital at the soon to be closed Steinway Hall.

Brazil-born Diego Caetano gave an assertive and virile performance of the finale of Chopin’s Second Piano Concerto in F Minor, Op. 21. He manifested a confident, fluent technique, maintaining momentum and bringing out inner voices while abstaining from perfumed, poetic reverie. Caetano is completing a doctorate at the University of Colorado at Boulder with noted Juilliard alumnus David Korevaar.

Conductor Paul Hostetter accentuated the accompanying strings’ colorful “col legno” passages and imparted a lilting buoyancy to the dance-like passages. The Rachmaninoff “Étude-Tableaux,” Op. 39, No. 5, with which Caetano ended the concert, however, emphasized virtuoso bravura at the expense of Slavic languor: It was more “étude” than “tableaux.”

William Walton wrote three brilliant, separate string concertos: for violin, viola, and cello. They were championed by no less than Heifetz, Primrose, and Piatigorsky. At this concert, Xue Annie Ding played the first movement of Walton’s Viola Concerto. Born and trained in China, she studies at Mannes College The New School for Music. She displayed a warm, expressive tone and generally solid intonation, especially in double-stops.

At first, the orchestra was too loud in the projecting acoustics of Weill Hall, but the conductor gradually dialed back the volume to achieve a more equitable balance. As played by Ms. Ding, this yearning and melancholy masterpiece of the 20th-century viola repertory deserves to be heard more frequently.

Leerone Hakami, 17, played the first movement of the Saint-Saëns Violin Concerto No. 3. She delivered a thoroughly enjoyable, convincing, committed performance. Once past the somewhat overpressured opening bars, her nuanced use of rubato, portamento, and a variety of bowings allowed the melodic line to soar. Her rich and warm tone, centered intonation, and excellent command of her bow arm engendered a performance with panache that was a pleasure to hear.

Flutist Nicole Schroeder played the lovely “Morceau de concours” by Fauré. Originally accompanied by piano, it was skillfully arranged for flute and orchestra by former San Diego Symphony music director Yoav Talmi. It paired well with the Saint-Saëns Violin and Cello Concertos that flanked it on the program. Schroeder played with a beautiful, well-projected tone undiluted by excess air, as well as subtly understated dynamics and lyrical phrasing. Two nights later, she again soloed with the orchestra in Franz Doppler’s folk-inspired “Fantaisie Pastorale Hongroise.”

Lastly, Nicholas Burkel, 16 years old, was heard in the first movement of the Saint-Saëns Cello Concerto No. 1. He studies with Marion Feldman in the Manhattan School’s Pre-College Division. Burkel’s performance was distinguished by incendiary temperament, well-articulated bowings, and some unusual tempo fluctuations that added interest by slowing down and stretching the songful, lyrical passages. His exuberant approach, with double-stops blessedly in tune, evidenced a thorough command of his instrument. The ending bars of the first movement were elided imperceptibly into the coda of the finale to supply a more satisfying conclusion.

Michael Sherwin, a Rockefeller and Fromm Foundation Fellow in music criticism, currently writes for the Epoch Times, Wagner Notes, and other publications. In October, he presented a “Tribute to Maestro Lorin Maazel” for the Wagner Society of New York at the Liederkranz Foundation.

Future concerts of the New York Concerti Sinfonietta’s International Concerto Competition winners and Shining Stars Debut soloists will be held May 3, 2015, at Carnegie Hall’s Weill Hall, and in spring 2015 at locations to be announced. For information, or to apply for forthcoming competitions and debuts, contact dr.juliejordan1@gmail.com or newyorkconcertisinfonietta.com.