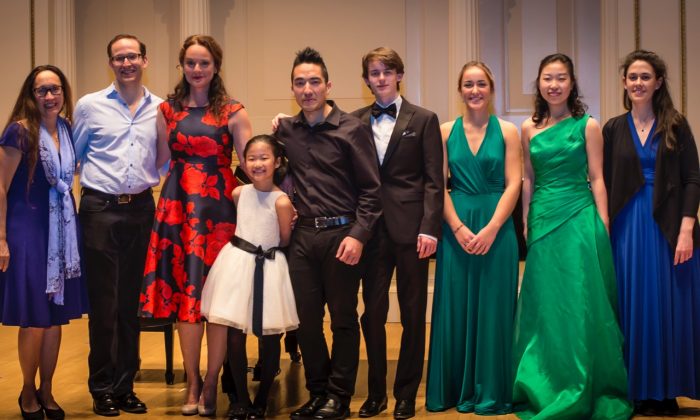 ​Tony-nominated Melissa Errico, who first appeared in the lead role of Sharon in 2004, is starring in a revival of the beloved stage musical at New York’s Irish Repertory Theatre, which runs through Dec. 18.

​In addition, seven 2016 International “Shining Stars” debuts were presented by the Sinfonietta at Carnegie. Three winners had ties to Ireland, while four others represented various ethnicities. The concert went from strength-to-strength: the quality of the soloists was uniformly high, capped by the unexpected appearance of a distinguished singing actress in Irish-themed repertory.

“Finian’s Rainbow,” which opened in 1947 and ran for 725 performances, was a pathbreaking production. Courageously, it was the first racially integrated musical on Broadway, long before the civil rights era made it socially acceptable. In 1968, a film version was released, directed by Francis Ford Coppola.

Melissa Errico, who first starred in “Finian’s Rainbow” 12 years ago, is reprising her role in an off-Broadway revival. Errico, now age 46, is truly in her vocal prime. As a surprise treat for the New York Concerti Sinfonietta’s Carnegie audience, Errico closed the concert by singing the iconic song, “How Are Things in Glocca Morra?,” accompanied by pianist John Bell, the production’s music supervisor.

Errico radiated charm and charisma, with a natural, almost conversational, unforced vocalism. She was not singing a song; she simply was the character—a beguiling Irish colleen. As an encore, she endearingly sang another classic song from “Finian’s Rainbow,” “Look to the Rainbow.”

It was indeed an honor to experience such consummate artistry, which deservedly received a unanimous standing ovation.

On the basis of annual auditions held in Ireland, three impressive soloists from the Emerald Isle were chosen as top prize winners in the 2016 International “Shining Stars” Competition.

​Cellist Aoífe Burke is a native of Cork, Ireland, and holds a Bachelor’s degree from the Royal Northern College of Music in Manchester, England. She is currently pursuing a Master’s degree from the Cork Institute of Technology’s School of Music.

At Carnegie, Burke played the first movement of Haydn’s Cello Concerto in D. Her Haydn was a thing of beauty. It was a pleasure to hear such intelligent, poised, and refined playing. She displayed a suave, velvety tone in all registers of her instrument, with an especially rich bottom end. Her intonation was solid everywhere on the fingerboard, even in challenging passages.

At a supplemental concert at the Church of St. Gregory the Great two days later, Burke performed selections from Bach’s Suites for Solo Cello. Her account of the complete Suite No. 1 in G was notable for its seamless and supple bowing, its shapely and dynamically varied phrasing, and her rhythmic accenting and enlivening of the movements derived from Baroque dance forms.

​Eoín Fleming, an 18-year-old Irish pianist, studied at the Royal Irish Academy of Music in Dublin. He is now enrolled at Shenandoah University, Virginia, as a pupil of renowned Irish pianist John O’Conor.

Fleming’s majestic traversal of the opening movement of Beethoven’s “Emperor” Concerto had, above all, nobility; it was a distinguished performance. While his technique was enviably secure, he laudably placed more emphasis on musical values than mere technical display. He showed an acute regard for phrasing and shaping the melodic line. The cadenza interestingly alternated passages of great velocity and poetic reflection.

​Violinist Claire Austen, age 19, is presently studying at the Royal Irish Academy of Music. Her performance of the first movement of Bruch’s Violin Concerto No.1 on this occasion may have been affected by debut nerves, taking some time to settle-in. After hitting her stride, she conveyed a dramatic conception of the work, with intense, rapid vibrato, powerful tone, passionate commitment, and considerable abandon.

​David Han Marks is a charismatic violinist with an incendiary technique. Hailing from Chicago, Marks holds Bachelor’s and Master’s degrees from The Juilliard School. Accompanied by the Sinfonietta in Sarasate’s “Zigeunerweisen” (“Gypsy Airs”), Marks—sounding like a seasoned professional—toyed with the music in a capricious, improvisatory manner that imparted an authentic gypsy flavor.

Marks’s supersonic, perpetual-motion conclusion was dazzling in its virtuosity. It is fortunate the tempo police weren’t on hand to give him a speeding ticket for his jet-propelled performance. Surely, he set a new world record for the quickest ever “Zigeunerweisen” finale at Carnegie Hall!

Clara’s playing reflected her impeccable upbringing; her stylish performance of the first movement of Mozart’s Violin Concerto No. 4 in D was a model of its kind. It was a lilting, lyrical, highly musical account, characterized by fleet tempos and a warm, classically proportioned tone. She displayed agile, sharply accented bowing, while her trills soared above the orchestra like a coloratura soprano. She astutely built up the cadenza, with fervent double-stopping, to serve as the apex of the movement.

​Born in South Korea, violinist Lauren Yoon is only 8 years old and began her violin studies at age 4 in the Dallas area. Now a diminutive third grader, she was heard in the three-movement “Winter” Concerto from Vivaldi’s “Four Seasons” with the Sinfonietta.

When her first solo emerged after the opening tutti, it was almost startling to hear such assured and confident playing. Despite her half-size violin, she displayed a full tone, solid bow-to-string contact over the entire length of the bow, a tasteful vibrato, varied dynamics, and reliable intonation. It was a refreshingly nuanced, nicely phrased interpretation showing considerable promise of greater things to come.

​Violist Annie Xue Ding is from the People’s Republic of China. Ding, who debuted with the New York Concerti Sinfonietta in 2014 in William Walton’s Viola Concerto, returned to play the first movement of Paul Hindemith’s 1935 “Der Schwanendreher” with pianist Nelson Padgett.

“Der Schwanendreher,” or the “Swan Turner,” refers to a cook who rotates a roasting swan on a spit and is a recurring theme in medieval German folk poetry. Carl Orff’s popular 20th-century cantata, “Carmina Burana,” even features the lament of the swan itself, eerily sung by a countertenor.

Paul Hostetter, principal conductor of the Sinfonietta, was alert, responsive, and expressive throughout the Carnegie concert. The ensemble, numbering 22 players on this occasion, expertly supported the diverse soloists.

The New York Concerti Sinfonetta will next perform at Carnegie Hall on May 12, 2017. For information, or to apply for forthcoming competitions and debuts, contact dr.juliejordan1@gmail.com or www.newyorkconcertisinfonetta.com.

Michael Sherwin has held Rockefeller and Fromm Foundation Fellowships in music criticism. He has written for The Epoch Times, Wagner Notes, The Juilliard Journal, Musical America, and other publications. He recently served as producer of a 2-CD album of “20th Century American Choral Treasures” for the National Endowment for the Arts.