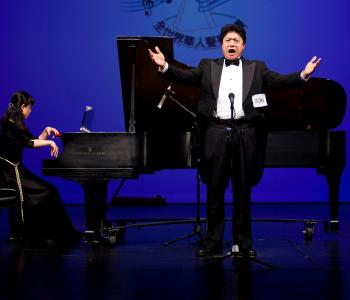 BY Helena Zhu TIMEAugust 6, 2009 PRINT
NEW YORK—There are many talented vocalists around the world, but they need something more to be considered “real artists” by the judges at New Tang Dynasty TV’s (NTDTV) Chinese International Vocal Competition last weekend.

“In addition to technique, we look at their understanding of the songs, and their outlook on life, which you can see in their eyes,” said judge Guan Guimin at a press conference. Guan was among the first artists to be named a “National First-Class Performer” by China’s Ministry of Culture.

“Foremost we require that they have good character. If they are slick headed or pompous, that's something they can't hide on stage,” he said.

This third annual competition is part of a series of nine held by international satellite television station NTDTV, whose mission is to promote traditional culture through the arts, according to its mission statement.

“Chinese people believe that traditional music was passed down by divine beings. Yet nowadays as human moral value decline, people no longer pursue purity and beauty," she said.

“When a person’s mind is clear and clean, his or her voice reflects this. Even when the singer is portraying miserable or intense feelings, he or she can still express it in a pure way, rather than pouring out anger,” she said.

On Friday, elite Chinese vocalists from more than 10 countries gathered in the Gerald W. Lynch Theater at John Jay College. Each performed one song of their choice for the preliminary round. In the semifinal and final rounds, contestants performed two songs, also of their own selection. At least one of the songs had to be sung in Chinese, and finalists could not repeat a song from previous rounds.

All songs had to be sung in bel canto style. Bel canto originated in 18th and early 19th century and is characterized by flexibility in the use of vocal range.

On Sunday evening, after three days of intense competition, 16 finalists were chosen. The winners of gold, silver, and bronze medals, in both female and male divisions, received cash prizes of $10,000, $3,000, and $1,000 respectively.

Yuan Qu said he has benefited greatly from the fact that the competition emphasizes both technique and character of the singer.

“Last year when I joined this competition, my ego was really big. I felt offended when other people criticized me. I was extremely concerned about my reputation and image. I was always nervous. Now, I don’t have these thoughts, I feel a sense of uprightness coming out of my singing and I am much more relaxed," he said.

Yuan Qu graduated from the China Conservatory of Music in 1990 and from the Beijing Vocal Music Research Institute in 1993.

Geng appreciated the competition in a different way.

“This vocal competition is so different from those in China, because it promotes pure, traditional musical forms,” said Geng.

“In China, in order to ascend in a vocal competition, you need to have money and connections. I was often eliminated from those competitions in the preliminary round because my family did not have the money."