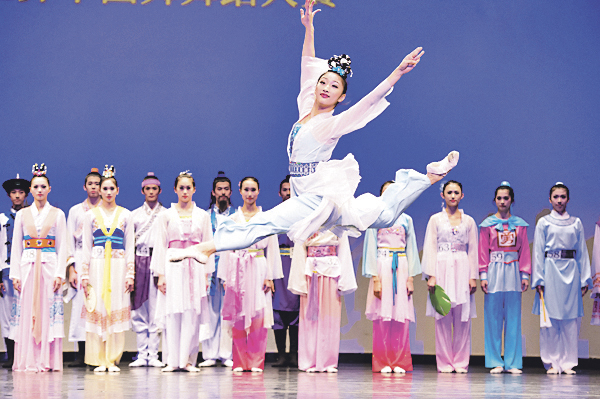 New Tang Dynasty Television made an announcement to the the Hong Kong round of the 7 th International Classical Chinese Dance Competition will be held at the MacPherson Stadium in Mongkok on Aug 1, 2016. (Larry Dai/Epoch Times)
Arts & Culture

New Tang Dynasty Television (NTD) made a new announcement a few days ago that the Hong Kong round of the seventh International Classical Chinese Dance Competition will be held at the MacPherson Stadium in Mongkok on Aug 1.

Cheryl Ng, the spokesperson for the preliminary competition, said more contestants have registered to join the competition since the Hong Kong Foreign Correspondents’ Club press conference, two weeks ago, in order to keep the promise to the contestants, the competition must be held on time.

Ng said NTD appreciates all the supporting comments received from sectors of Hong Kong and around the world, the competition is bound to be held successfully.

Several U.S. heavyweight senators and the Assistant Secretary of State in charge of human rights also showed deep concern over the incident in interviews with NTD television, in Washington DC.

Ben Cardin, Senator and vice-chairman of the Federal Senate Foreign Relations Committee told NTD: “Commitments were made to the people of Hong Kong about their freedom and their ability to participate in their Government.”

He said: “We watch that very closely and there should be an open free society for the people of Hong Kong, that was the system that they had before the one country two systems was announcement and we want to make sure those freedoms are guaranteed.”

Senior Senator Robert Menendez said: “I think the essence of a free society which ultimately gives rise to the economic success of a country derives from the freedom that the people have, the ability to express themselves, the ability to create, the ability to innovate without repression.”

He felt the freedom to express themselves and to create is vital for the democratic and economic development of Hong Kong.

He said he will continue to speak out about the disturbed dance competition and other incidents that involve suppressing Hong Kong’s democracy and freedom.

He hopes the U.S. federal government can put freedom, democracy, and human rights into a position of priority while facing China and Hong Kong affairs.

Rubio also said: “The freedom and democracy in Hong Kong is under assault, the Chinese government, the communist party of China has broken the promises that it has made.

“Unfortunately it seems that the Chinese Government is utilizing undue influence and control over Hong Kong and you see increasingly in Hong Kong, the lack of freedom, the lack of space, it looks reminiscent of what you see in China, unfortunately” Rubio stated.

Assistant Secretary of State for Democracy, Human Rights, and Labour, Tom Malinowski also said he had come to learn about the incident and was deeply concerned.

The Hong Kong branch of the New York-based broadcaster held a press conference on June 23, to set out the issue regarding Hong Kong Government’s forced cancellation of the initial venue.

Spokesperson Ng criticized the Hong Kong government’s act as deliberate political interference by Chief Executive Leung Chun-ying. She said NTD will carry on searching for justice in Hong Kong and internationally. The incident in which the original venue was cancelled has not yet been resolved and NTD is pushing for an investigation.

She said she had sent a letter to Chinese leader Xi Jinping’s government asking for them to investigate the incident and to identify the perpetrators.

This case of unreasonable interference from the government is not an isolated incident. In January 2010, the Hong Kong government denied visas to six technicians of Shen Yun Performing Arts prior to their performance in Hong Kong on the pretext of protecting the employment of local workers. The performances had to be cancelled as a result. The incident was recorded in the International Religious Freedom Report 2010 by the U.S. Department of State.