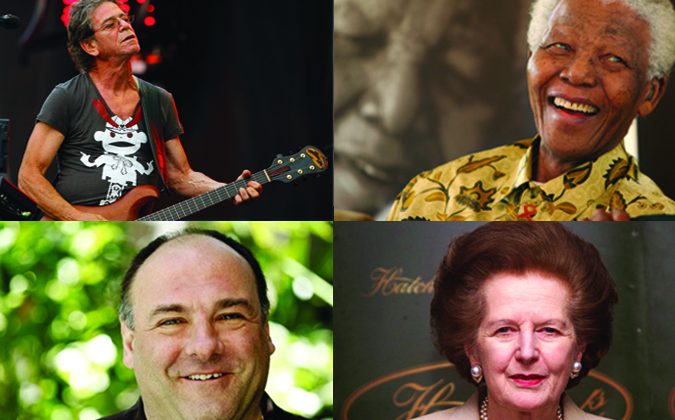 Pauline Phillips first penned what became her widely syndicated advice column “Dear Abby” in 1956. She continued for an impressive 44 years until at age 82 she brought on her daughter Jeanne as a co-author. Jeanne Phillips then took over as sole author and legal rights holder to the pen name in August 2002, in announcing that her mother was suffering from Alzheimer’s disease. Pauline Phillips died at 94.

Stan “The Man” Musial spent his entire 22-year career, from 1941 to 1963, with the St. Louis Cardinals as an outfielder and first baseman wearing #6. Among his many achievements, the hall of famer was named National League MVP three times, won the NL batting title seven times, and won three World Series. He was inducted into the Baseball hall of Fame in 1969. He died at 92 at home in Ladue, Missouri.

Ed Koch was a lawyer, movie critic, and U.S. Congressman for two terms, before winning three terms as mayor of New York. The Bronx native served  from 1978 to 1989, and is credited for lifting the city out of its spiral of chronic crime. He died at 88.

Roger Ebert, film critic for the Chicago Sun-Times for 46 years, became of his profession to win a Pulitzer for film criticism. He is best remembered as half of Siskel & Ebert with Chicago Tribune’s Gene Siskel. Their televised bickering over films on “Sneak Previews” then “At the Movies” earned them a huge following and cemented the phrase “Two Thumbs Up” as the stamp for critical praise. He died at 70 after an 11-year battle with cancer.

Margaret Thatcher, known as “The Iron Lady,” served three terms as U.K. prime minister from 1979 to 1990. She was Britain’s first and so far only female PM. She introduced economic reforms including the sale of state industries, reducing trade union power, and scaling back social welfare programs. She died at 87.

The child star, Annette Funicello was best  known for her TV role in the 1950s “The Mickey Mouse Club.” She died of complications related to multiple sclerosis at age 70.

Jonathan Winters, a pioneer of improve standup comedy, inspired comedic greats like Robin Williams, Jim Carrey and others. He died of natural causes at age 87.

Soap opera star Jeanne Cooper played grande dame Katherine Chancellor on CBS’ “The Young and the Restless” for nearly four decades. She was 84.

Folk singer and guitarist Richie Havens had the honor of being the first performer to take the stage at the 1969 Woodstock Festival. He also performed at Bill Clinton’s presidential Inauguration in 1993. He died of a heart attack at 72.

George Jones, the hard-living country singer best known for his heartbreaking classic “He Stopped Loving Her Today,” died  in Nashville after being hospitalized with fever and irregular blood pressure. He was 81.

Pop psychologist, columnist, and television and film personality (usually playing herself), Joyce Brothers wrote her iconic daily newspaper advice column for 53 years from 1960 until 2013. Her career first took off in 1955 when she became the first woman to win The $64,000 Question game show. Her final topic was boxing. She was 85.

Jean Stapleton was best loved for her role as Archie Bunker’s far better half, the sweetly naive Edith, in the 1970s television comedy “All in the Family.” She died of natural causes at her New York City home at 90.

Legendary football hall of famer, Deacon Jones, was a defensive end mostly for the L.A. Rams, and later in his career for the San Diego Chargers and Washington Redskins. His NFL career spanned 14 years, ending in 1974. His most lasting contribution to the game was coining the term quarterback “sack.” Quarterback sacks were not officially recognized as a statistic until 1982.

Esther Williams started out as a competitive swimmer, but after being denied a trip to the Olympics in 1940 because of World War II, she segued into acting. Her first break was starring across from Olympian and “Tarzan” film star Johnny Weismuller in the Broadway musical “San Francisco Aquacade Review.” She soon caught the eyes of MGM executives and she was launched to stardom. She died at home in Beverly Hills at 91.

Scottish fiction and science fiction writer Iain Banks (Iain M. Banks on his sci-fi titles) was best known for his novels “The Wasp Factory,” “The Crow Road,” and “Complicity.” He died of caner at 59.

James Gandolfini was most beloved for his role as conflicted mob boss Tony Soprano in the award-winning HBO series “The Sopranos” that aired from 1999 to 2007. His film credits include “Zero Dark Thirty” and “Killing Them Softly.” He died unexpectedly while on vacation in Rome, Italy at age 51.

Margaret Pellegrini was of the original 124 Munchkins from the 1939 classic film “The Wizard of Oz.” She died of a stroke at 89.

Best-selling mystery writer Barbara Mertz wrote dozens of novels under two pen names: Elizabeth Peters, who wrote about the daring Victorian archaeologist Amelia Peabody, and Barbara Michaels. She wrote nonfiction books about ancient Egypt under her own name. She died of cancer at 85.

Elmore Leonard started his career as an ad man, while writing short stories and western novels on the side. He wrote his first crime novel, a genre he became best known for, “The Big Bounce” in 1969. Several of his nearly 50 books were adapted into movies including “Get Shorty,” “Jackie Brown” (based on the novel “Rum Punch”), and “Out of Sight.” He died at home in Bloomfield Village, Michigan at 87.

A native of Northern Ireland, renowned poet Seamus Heaney was known as a bard and a voice for peace. His themes explored many facets of Irish life including wonders in rural Ireland, political strife in Northern Ireland, Celtic mysticism, family and Catholic faith. Heaney won the Nobel Prize for literature in 1995. He died at 74.

Prolific and widely popular American novelist and historian, Tom Clancy authored 17 bestsellers and has roughly 100 million copies of his books in print. His first novel, “The Hunt for Red October,” is considered the defining work of the military thriller genre. He died at 66 of an undisclosed illness.

Lou Reed first made a name for himself as leader of the Velvet Underground—a band that never saw commercial success, but influenced a generation of musicians. During his solo career that spanned from 1972 until his death, Reed had only one mainstream mega hit, “Walk on the Wild Side” in 1973. He died from liver disease at 71.

Probably the most shocking death of the year was Paul Walker’s. The beloved star of the “Fast and Furious” movies died in a fiery high-speed crash in a Porsche Carrera GT. With his blond-haired, blue-eyed good looks began as a child model at the age of 2. He was 40 and leaves behind a 15-year-old daughter.

Probably the most expected and commemorated death of 2013 was that of Former South African president and anti-apartheid champion, Nelson Mandela. His state funeral was attended by some 4,500 people including heads of state, royalty, billionaires, and celebrities, before he was buried in Qunu, the eastern hamlet where he began his extraordinary journey. A journey that went from violent revolutionary, to 27 years imprisonment, to president. He was 95.

Featured on I-Am-Bored.com – A list of sites for when you’re feeling bored